Obtaining the Campaigns list from the server has failed!
Server response:
CM Ad cahger Server plugin is not active on https://legendarygroup.co/admanager/
You Are Here Home Batman on Film BATMAN #108 Review

SYNOPSIS: Batman goes undercover to infiltrate the transhumanist gang known as the Unsanity Collective and learn more about their sudden appearance in Gotham. And what nefarious plans does Simon Saint have for Arkham Day survivor Sean Mahoney? How does it connect to the Magistrate? 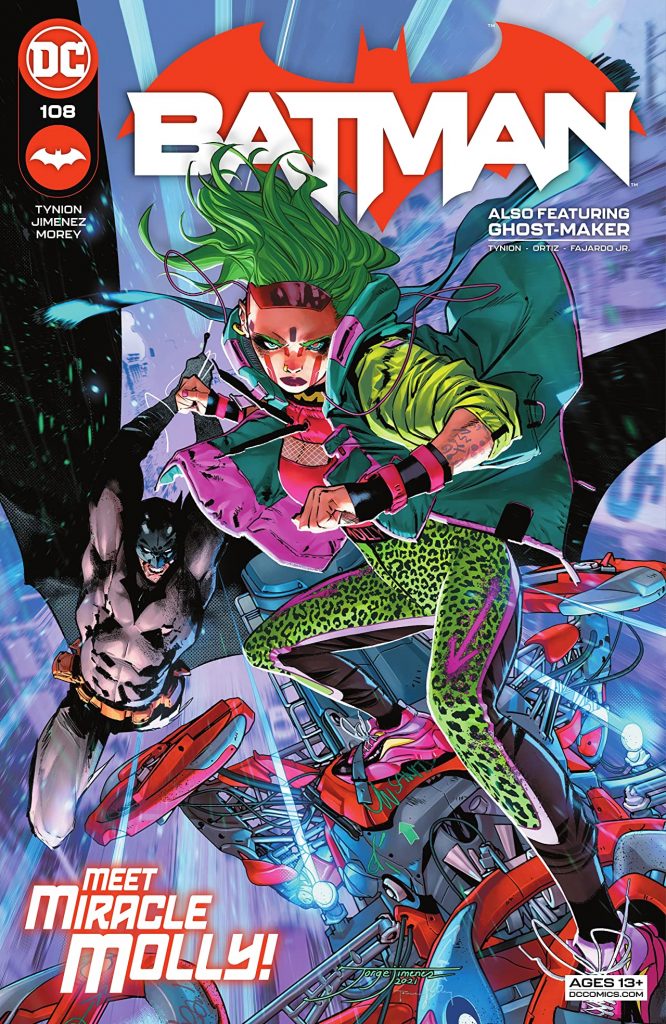 BATMAN #108 promises a meeting with the latest rogue, Miracle Molly. After a trip around Gotham with the new character, I’ll pass next time.

I don’t want to waste your time, so I’ll just cut to the chase; this issue is not very good. We were first teased with Miracle Molly in BATMAN #106 (briefly) when Batman took down this new Unsanity collective. We knew, given writer James Tynion IV’s tactics, we would eventually get to know this character. Here, Bruce uses the guise of “Match” to infiltrate the collective and get a peek behind the curtain. What follows is a trip around a poorly-impersonating BLADE RUNNER setting with a lot of dialogue that falls flat. I just simply didn’t care about any of this, and I promise you I tried.

Outside of Molly, Tynion continues to feed us little nuggets to show us how FUTURE STATE came to be. This, too, continues to fall flat for me as I don’t really care to see how we got to the 2-month stunt. It happened, it was brief, it was fun, let’s move on.

The strength of this arc has continually been Scarecrow, and he was barely included in this issue too. I understand giving elements time to breathe and build up for a nice payoff. But this issue followed a formula of giving us a first-page tease of Dr. Crane, then not coming back to him. It’s now getting a little tiresome, instead of intense.

For as much as I’ve praised artist Jorge Jimenez, I just didn’t think this was his best work either. That setting I just mentioned was very bright, distracting, and a little jarring. The panels didn’t feel as cohesive as the last two issues, which were building on each other to tell an interesting, creepy tale. For a guy whose art continues to get better, it pains me to say this wasn’t his best.

I don’t like not liking things. I love to love things. But I’ll always be honest, respectively, when it comes to reviewing. I did not enjoy this issue, in any way whatsoever. There just wasn’t much happening, outside of a new character giving a long, boring backstory of a poorly-named group and their mindset. – Ryan Lower