You Are Here Home Batman on Film BATMAN #113 Review

SYNOPSIS: Ghost-Maker reveals a dark revelation about his past connection to Jonathan Crane while Batman puts together the pieces of Scarecrow’s master plan. Using the Unsanity Collective’s technology, the villain plans to detonate a “Fear Bomb” in Gotham City! Backup: Clownhunter has been dosed by the Scarecrow with a deadly fear toxin and is now traveling through his greatest nightmare of Gotham City. Will the Clownhunter center himself and strike back at Scarecrow? Or will he succumb to all his worst fears?! 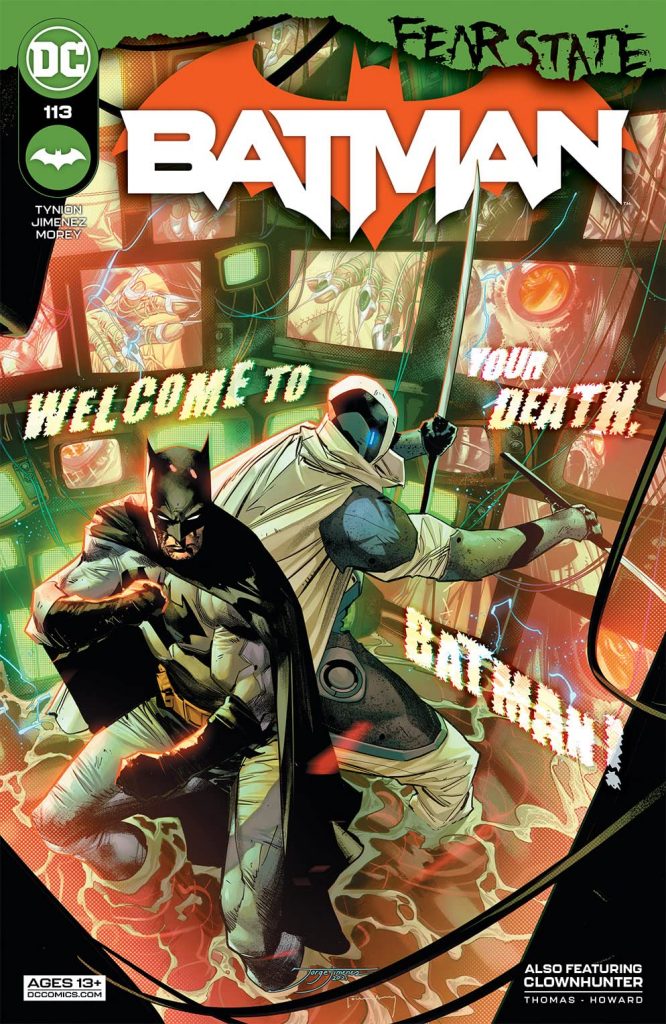 “Fear State” amps up this week, as we dive into our second BATMAN issue of the month. Scarecrow attempts to plant fear into the citizens of Gotham through other means, Simon Saint feels powerless, Peacekeeper-01 meets a new enemy, and Ghost-Maker reveals a connection with Jonathan Crane from long ago. Oh, and we go into the mind of The Batman.

That summary doesn’t necessarily do justice for what James Tynion IV is attempting in this issue, and that’s both good and bad. As I’ve (repeatedly) written in these reviews each month, he’s really trying to put a lot into his story, which is exciting for us readers. Epic tales with a host of characters and blockbuster events can be fun, thrilling, and dramatic. However, this book ends up becoming tiresome when elements don’t feel organic, feeling forced while continuously adding more elements creating more loose connections, and turning into a convoluted mess.

Sadly, that’s what I feel this book has become.

To stick to specifically this issue, Tynion focuses on how Scarecrow is taking a different approach in striking fear into people. Thus far, it’s not working for me but I’ll see this whole story out before making up my mind. But we do get a thorough explanation, which also left me scratching my brain. Not only do we have Crane looking right at us and explaining his plans, but it’s also done in a weird way of having Ghost-Maker and Batman enter Batman’s brain, then Ghost-Maker retelling a story of a past experience with Crane while at Gotham University where Crane basically lays out his entire Fear State plans and Ghost-Maker thought just now to bring it up to Batman while they are in his brain.

I get it, it’s comic books. But this is just a messy way of storytelling that doesn’t bring clarity.

Jorge Jimenez continues to be the strength of this book. While there isn’t a ton of action, we do get some cool Batman shots. He glides through the city, and Jimenez knows just how to frame him. The artist is challenged to enter the mind of Batman, and also does a great job making it look off, but also in focus.

I swear to you, I enter each issue of BATMAN with an open mind, giving it a fair shake. This book just isn’t doing it for me, and “Fear State” is only finalizing that thought. A book that’s masterfully drawn can’t save a story that feels convoluted and forced. – Ryan Lower