You Are Here Home Batman on Film BATMAN ’89 #2 Review 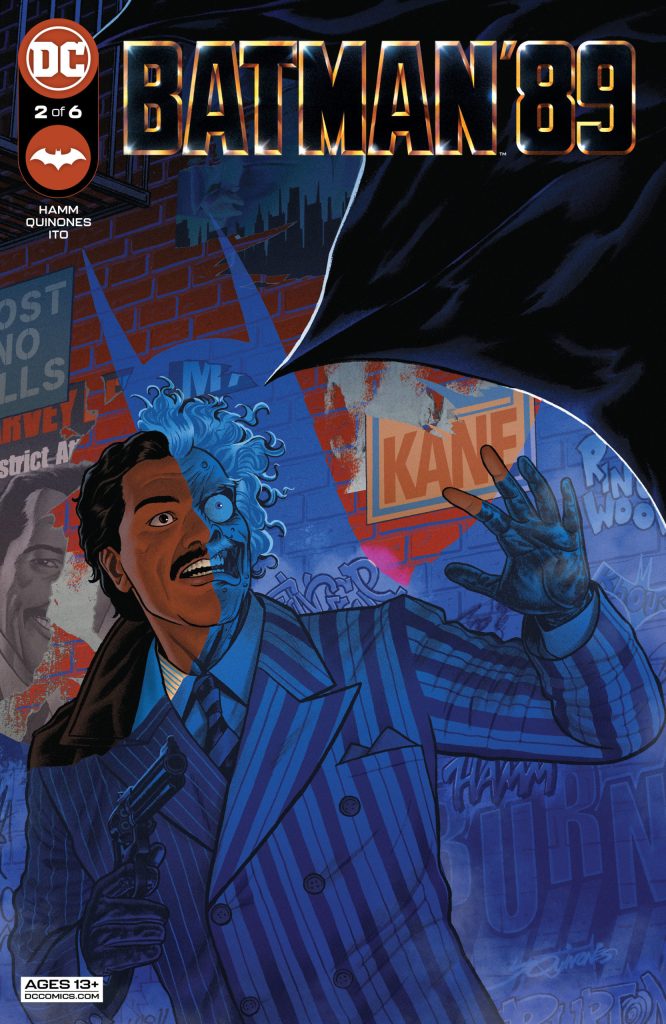 If you read my review of BATMAN ’89 #1, you know that it didn’t exactly blow me away.  It was OK overall, but I was hoping that I’d love it.  However, since I didn’t want to write off the whole BATMAN ’89 series based on one issue, I decided to see if things picked up and got better in issue #2.

Harvey Dent still wants The Batman’s head on a pike (for political reasons…you’ll see) and The Dark Knight continues to find himself the target of both local and federal authorities.  Despite the fact that I found Dent to be pretty unlikeable in issue #1 and 95% of issue #2, we do finally get to see the heroic side of Harvey at the issue’s end.  Heroic yes, but a doomed heroic act nonetheless.

So yeah, we get to see how this incarnation of Harvey Dent becomes Two-Face and I’ll leave it up to you to find out how for yourself.  We’ve seen different spins on how Harvey becomes Two-Face in various forms of Batman media, so it doesn’t have to go the route of comic book lore just because this happens, well, in a comic book.

Getting back to the “setting things up” stuff, a very Michelle Pfieffer-ish Catwoman — with a tad of the 1960s BATMAN TV series version of the character thrown in — appears briefly in this issue.  It appears that the still not looking much like Michael Keaton Bruce Wayne is not only shocked not only to see her, but he’s shocked to see her alive.  So I figure we’ll find out how she escaped with her life at the end of BATMAN RETURNS.

I gotta give props to writer Sam Hamm for coming up with a pretty clever way of how he gets his name.  But yeah, “Robin” shows up in this issue.  How does he become Batman’s partner?  That remains to be seen in an upcoming issue.

All in all, I liked BATMAN ’89 #2 better than the first issue.  While it didn’t blow me away, I felt like it’s starting to go somewhere, if you will, and I’m interested enough now to see where that is.  Oh yeah…

There’s a cool homage to the Batsuits from BATMAN ’89 and even BATMAN FOREVER‘s “Sonar Suit” in this issue.  Hopefully, there will be more nods to the Burton/Schumacher Batman movies along the way.  Hell, I wouldn’t mind seeing all of those Batmobiles parked in the Batcave! – Bill “Jett” Ramey