You Are Here Home Batman on Film BATMAN/CATWOMAN #3 Review

SYNOPSIS: It’s been The Joker all along, you see.  Selina Kyle knows this. Early in her career as Catwoman, he was there to mess things up for her. Same with later, when she and Batman were finally getting together…for the third time, but still. That time stuck. No thanks to The Joker. Or to Phantasm, who now has her sights set on Catwoman because she thinks that will be her in to get after The Joker herself. And she has to do it before Batman gets to him first. 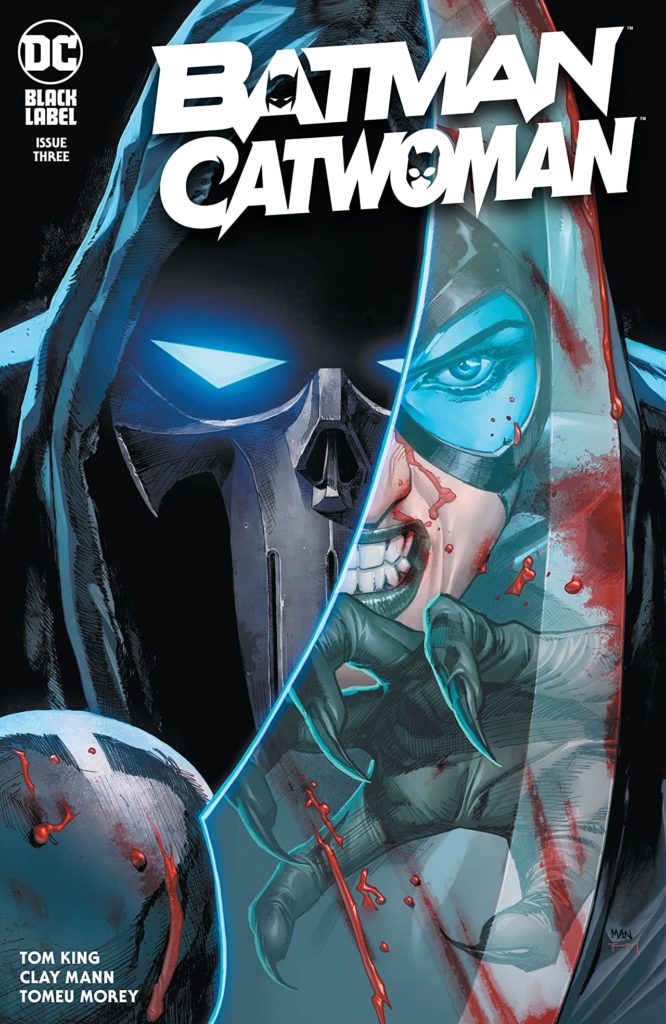 “Mother. Is everything all right?”

Everything is not all right in Gotham, be it past, present, or future. However, that is good news for those picking up the latest chapter in Tom King and Clay Mann’s time-spanning opus!

“God Rest Ye Merry Gentlemen” is this issue’s song, fitting if you think about who just passed away the last issue. Helena opens up the window box this time, leading into her opening the story alongside Commissioner Dick Grayson, looking very distinguished in his beard and trench coat. Check out how Helena’s blue Bat-Signal shines against a building, à la The Dark Knight Returns!

I love Helena’s Bat costume! It’s this wonderful mix of inspiration from her parents, Batgirl’s post-Burnside outfit with the grey and yellow, and Batman Beyond’s logo and wings. The yellow glow of her lenses distinguishes her from past iterations and the side torso pouches offer a different way to do a utility belt. It’s a great design; one that I’d love to see a figure of some day (if you’re reading this McFarlane Toys)!

The story shifts from the future to the present, with the Joker locked up in solitary, singing this issue’s carol, as Batman and Catwoman observe remotely from the Batcave. I took it as a subtle nod to the Batman: The Animated Series episode, “Christmas with The Joker”. It was hard to not hear Mark Hamill sing as the Joker pranced around.

I’m really enjoying King and Mann’s take on Joker in this series. He’s deadly, he’s dangerous, and a true wild card. You literally never know where he’s going to turn up. Mann adorns him in some interesting costume changes, that while not traditional, feel 100% Joker. While the reader expects him to be intertwined with the Dark Knight, so much of the fun of this series so far is seeing how equally involved with Catwoman he is. It’s a slow burn as King reveals the layers of their relationship as Joker continuously tries to pull at her allegiances.

I may be stretching things thinking about one possible reference to B:TAS, but I feel pretty confident that the dining scenes between Selina and Helena are directly inspired by Batman (1989). Something is off with Selina in these scenes. Maybe it’s the loss of Bruce, maybe it’s her recent actions. While Helena is picking up that something isn’t quite right, I’m left with wondering how much of her father’s detective skills have been passed down. Will her presumed love for her mother blind her to facts, or has she already seen through her?

Bruce/Batman once again seems to be on the backburner in this issue as we spend time fleshing out Helena and the Selina/Joker arcs. It’s so riveting right now that I don’t mind, but I hope we get more involvement from him soon, otherwise, we might have to change the name of this series to Catwoman/Batman, or maybe Catwoman/Joker at this rate! King does toss in a little romance for those Bat/Cat shippers out there.

What of the Phantasm? While Andrea Beaumont doesn’t show her face, her alter ego once again makes an impression on this issue. Just check out her introduction as the story shifts from the future to the present! It’s straight out of a horror movie as the Phantasm emerges from the inky shadows in the window of an apartment, its occupant’s hand smearing blood across the pane as the reader gazes at the scene. The staging is pure perfection as we see holiday parties carrying on in the windows above, oblivious to the slaughter below them. It’s one of many examples of Mann at his finest. It’s so simple, but I love this page!

The big moment comes when Phantasm attacks Selina at Wayne Manor! Once again we get some heavy Mask of The Phantasm influence, as well we should! Selina has made the Phantasm’s naughty list and I feel relatively secure in saying it’s not because she’s with Bruce Wayne. Whatever is going on with the Joker is dirty, dirty business. Hopefully, this leads to some Batman and Phantasm conflict in the next issue. King has tortured us long enough waiting for them to meet in costume!

Mann’s art just shines with every panel! His art is heroic, sexy, creepy, dramatic, and riveting. Combined with King’s storytelling, this is some masterful work and the lynchpin to this title’s success.I am greatly enjoying how the story casually shifts time periods and it wouldn’t be successful without the art of Clay Mann. His attention to detail is what makes all this work, not to mention fun layouts and camera angles. The man knows how to tell a story. He even brings the page gutters to life with holiday wrapping paper and a literal cat and mouse chase!

Batman/Catwoman #3 is not your typical comic book. Unconventional in its storytelling, it requires the reader to immerse themselves in the world of Gotham, no matter the time period. While light on the Caped Crusader, I find myself completely engrossed in the story King is weaving and Catwoman’s involvement. Batman’s name may come first, but this is Selina Kyle’s story right now and it’s purrfect. – Javier E. Trujillo