Obtaining the Campaigns list from the server has failed!
Server response:
CM Ad cahger Server plugin is not active on https://legendarygroup.co/admanager/
You Are Here Home Batman on Film BATMAN/CATWOMAN #7 Review

SYNOPSIS: When Batman begins to doubt Catwoman’s allegiance, it leads to trouble on the streets of Gotham. Who does Selina support: Joker, Phantasm, or the Dark Knight? Well, he’ll soon find out that some questions are better left unasked. If he’s going to test her loyalty, she’s going to test his mettle. Thus, Bruce Wayne finds himself locked in a bank vault with the Gotham PD knocking on the door! 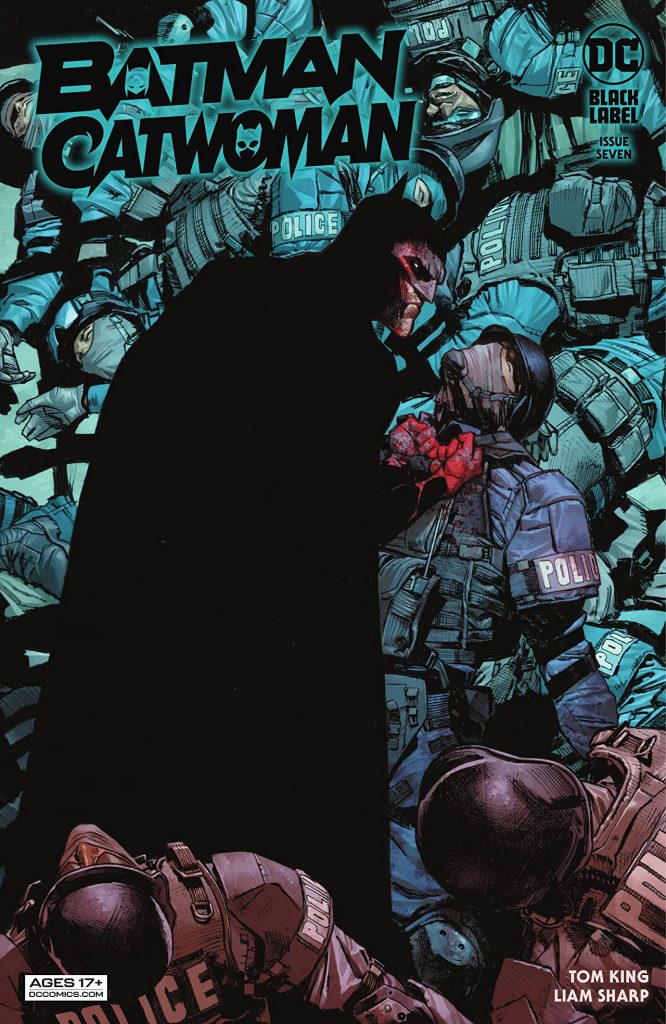 After a long gap between issues, Batman/Catwoman is back with its next installment in less than a month! How did this happen? Well, you can thank (or blame) the new artist, Liam Sharp!

Taking over the art and colors for this entry, Sharp brings his considerable talents once again to the world of the Dark Knight. However, his art isn’t like anything I can recall seeing from him.

Having turned in stellar work on recent titles like Wonder Woman, The Brave and The Bold: Batman and Wonder Woman, The Green Lantern, and Batman: Reptilian, he’s shown himself to be a meticulous artist, with innovative layouts and detailed linework.

That’s not who showed up here.

Oh, sure, his art is still very elaborate and his panel layouts are dramatic and effective, really moving the action along. It’s just that his work in this issue, while still looking like his style, is also very evocative of Bill Sienkiewicz.

Sienkiewicz is known for his unique style, something I defined as “scratchy” when I was much younger. As I matured and started accepting more expressionistic work in the comics I read, I came to love his often-times abstract visuals. Sharp channels this creativity for Batman/Catwoman, delivering visuals that are raw, visceral, and dirty.

While it may seem like I don’t like what Sharp did, I’d like to point out that I very much love the art in this issue. It draws you in, makes you feel, and is complicated, just like the story itself.

The only problem I have is that it’s not in line with the visuals established by Clay Mann.

Mann’s work is very clean. There’s a lightness to his line and Sharp’s art here is drenched in heavy blackness. While that is tonally fitting this point in the story as Bruce and Selina are at several crossroads and odds in both the past and the present, it’s not consistent with what’s come before.

While I, and presumably you, are reading this month to month, it’s going to be remembered once it’s finished as a trade, as one complete story. Sharp’s chapters are going to be quite jarring to those reading this for the first time in a collected edition. Mikel Janin, a past King collaborator, would’ve been a much more suitable fit, if only he weren’t working on Superman and The Authority.

As for the story, this issue is themed to “O Come, All Ye Faithful”. Gone is the vibrant graffiti to Wayne Manor’s facade. Instead, a shadowy figure approaches. Police Commissioner Dick Grayson, perhaps?

King picks up where he left off from, with Bruce meeting Selina at her home in the past. His visit quickly turns to them making love to the aforementioned tune before cutting to the harsh present, with Bruce waking up naked and bound in the vault of the Bank of Gotham, having been left there by Catwoman and Phantasm so they can murder The Joker.

We quickly transition to Commissioner Grayson and GCPD’s SWAT team staged outside Wayne Manor to apprehend Selina Wayne for The Joker’s murder. The transitions feel fast and furious at first and took me a second longer to recognize them, having gotten accustomed to how Mann and Morey handle the shift in time. The exchange between Selina and Dick is very wry, with Dick asking how badly her arrest is going to go. Instead, Selina surrenders peacefully, offering her insight into why Bruce adorned Robin in the familiar red, yellow, and green. Of course, it all comes back to The Joker, who still poisons and haunts the lives of those in Gotham, even after his death.

Back in the past, Bruce can’t turn off being Batman, noticing the left-behind green hairs, the red lipstick stain on the couch, and the smell of him. Selina, despite her love for Bruce, won’t tell him where Joker is. In the present, Bruce faces his current betrayal by digging a pin out of his foot to use to pick the lock of his cuffs. Next, he uses it to draw blood from his forehead so he can smear it on his face in an attempt to disguise his famous features. The determination King and Sharp bestow upon Bruce is so very Batman. As he prepares for a fight you know it’s going to go very badly…for them.

This all coalesces in the future as Helena talks to her father’s old suit, memorialized in the Bat Cave. She’s distraught, having turned in her own mother to the police, and can’t figure out why her father loved her mother so. She echoes the readers’ thoughts. How did Bruce get past Selina’s criminal ties? While we know they got married, this issue makes one wonder how they ever reached the altar given all the pain they’ve caused each other in this series. Helena proves in this issue that she is very much her father’s daughter. Her speaking to her memory of him parallels all the times Bruce has talked aloud to his departed father, only this time, no sign from above is coming as to what she should do next.

We’re left to wonder the particulars of Bruce’s escape from the bank vault, but what few glimpses we get seem crazed and brutal. It conjures images of Batman fighting the police in Year One. Sharp’s colors drench the panel symbolically in the blood Bruce has drawn from himself, adding to the feeling of a visceral escape.

The issue comes full circle as it ends with Selina being the one trapped and betrayed in both the present and the future. King and Sharp bring a powerhouse of an issue. There is so much passion coming out of these pages (and not just between Selina and Bruce in the past). Batman/Catwoman really reaches the heights of SuperHero Soap Opera with this entry, but while I was enthralled, I can also see why someone would be turned off by the change in artists, particularly with the clashing style. For those undeterred, there’s an intimate look at our protagonists and the lengths they’ll go to in order to meet their objectives. – Javier E. Trujillo