Obtaining the Campaigns list from the server has failed!
Server response:
CM Ad cahger Server plugin is not active on https://legendarygroup.co/admanager/
You Are Here Home Batman on Film BATMAN/CATWOMAN #8 Review

SYNOPSIS: Pulled apart and torn together! Setting new boundaries in their relationship leads to conflict at home and on the mean streets of Gotham for Batman and Catwoman. With opportunists like the Penguin waiting in the wings to strike, our hero becomes more vulnerable than ever. Meanwhile, Phantasm locates her target-The Joker! 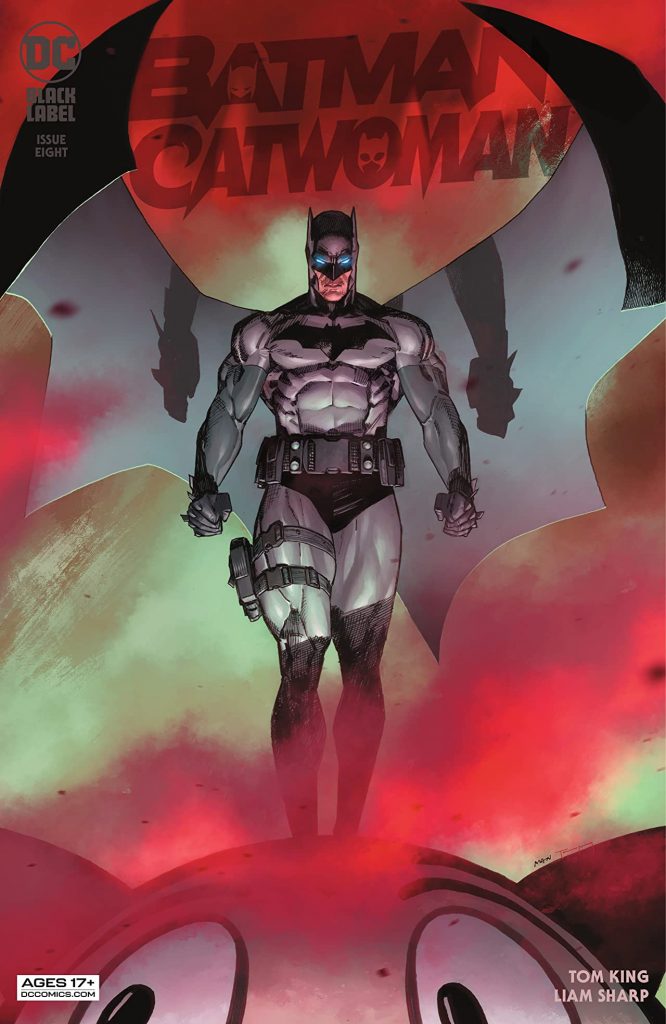 Liam Sharp returns this issue, providing once again the art and coloring within. Much like the last outing, his style is in no way shape, or form similar to the look Mann has established. This is intentional on Sharp’s part, doing what he feels fits this particular story. I find that interesting, as his art is oftentimes nightmarish in this issue.

Take his Joker, for example. Mann’s is certainly diabolical and frightening, but Sharp brings out something far more devilish. As he demands The Batman’s daytime location from Selina at gunpoint, his eyes become twisting pools of red insanity, his brow furrowing into the winged shape of a bat. At another point in the timeline, Sharp repeats the imagery as The Joker attempts to murder his next intended victim. The Joker has been terrifying this entire series, but Sharp really hits it home here, adding another piece to the puzzle of why Selina would murder him.

This is by far the most demonic I’ve seen The Phantasm portrayed as well. Obviously, her mask is evocative of Grim Reaper imagery, but it’s always been very clean-cut, no doubt in part due to its animated origins. Sharp presents something more twisted, mirroring the grief of the person donning it. Like The Joker, The Phantasm, too, is a villain escaped from the bowels of hell, her expression only softening when she speaks to a child about her son.

I found the time transitions a little harder to follow this outing. Usually, it’s easy to go by costuming, particularly when it comes to Selina, but the events don’t feel like they jibe with where we left Bruce and Selina in the present-day last issue, where Selina was stumbling around the Bat Cave, her abdomen flayed when the Phantasm betrayed her. The argument Batman and Catwoman are having also feels like it belongs in the past, not the present, where they are trying to find where The Joker and Phantasm have gone.

As usual, King handles the relationship dynamics between Bruce and Selina well. I enjoyed her digs at Bruce and how she feels she’s just another belonging to him, his “Batcat”, a nod to their “shipper” name. Theirs is a complicated relationship, but Commissioner Grayson lets it slip in the future as to why Bruce was so taken with her. Selina, for all the ways she is Bruce’s opposite, is also everything he could want, “the whole garden”, as Dick says. We definitely see so many different shades of Selina in this title, from mercurial as she ponders the existence of figgy pudding as a man bleeds out, to vengeful as her older self breaks out of prison so she can exact one more revenge on The Joker’s corpse.

There’s no doubt that the Clown Prince of Crime has been downright vile in this series, but I still don’t feel we’ve seen the big thing that has pushed Selina to do that to him when she escaped her incarceration. I found her rearranging his face to be poetic though, denying him his mirthful grin in the afterlife. I’m not sure Selina can come back from what she’s done in the future. It’s even more clear now why she waited for Bruce to pass away before going through with her plan. She has already gone past being a thief. What happens now when Helena confronts her once again?

This series continues to draw readers in with its labyrinthine character dynamics and timelines. Sharp’s visuals further entrench you into the story, with moody greys and purples adding a layer of melancholy to a story set during a period when people should be experiencing holiday cheer. When Sharp decides to use a bold red, it leaps out at you. There’s something about his art that makes this issue feel the most harrowing yet. Despite my confusion on when some of it takes place, this is once again another solid issue of Batman/Catwoman! – Javier E. Trujillo