Obtaining the Campaigns list from the server has failed!
Server response:
CM Ad cahger Server plugin is not active on https://legendarygroup.co/admanager/
You Are Here Home Batman on Film BATMAN: EARTH ONE, VOL. 3 Review 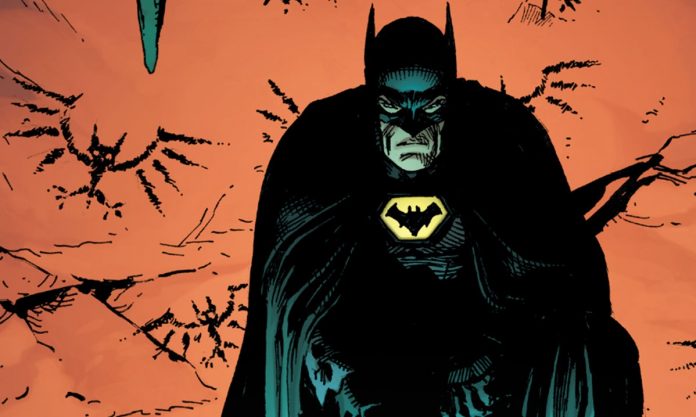 SYNOPSIS: Harvey Dent is dead. Or is he?

A gang of thieves thrusts Gotham City into a state of fear when they are mysteriously well-armed with military-grade weapons: flamethrowers, grenade launchers, and even tanks.
And this gang claims it is funded by none other than former district attorney Harvey Dent.
Balancing his two lives, Bruce Wayne must find the truth by tapping his growing network of agents, including Alfred Pennyworth, Jim Gordon, Waylon “Killer Croc” Jones, and the savvy new Catwoman.

Bruce is distracted by the seemingly impossible return of another figure believed dead: his grandfather Adrian Arkham. He must also comfort his longtime friend, Gotham City mayor Jessica Dent, who is scarred both physically and mentally from her experience with the Riddler, which resulted in the gruesome death of her brother.  But is Harvey back, plotting revenge on a city he proclaims to be guilty?

When Batman discovers the truth behind these many mysteries, his entire world unravels… 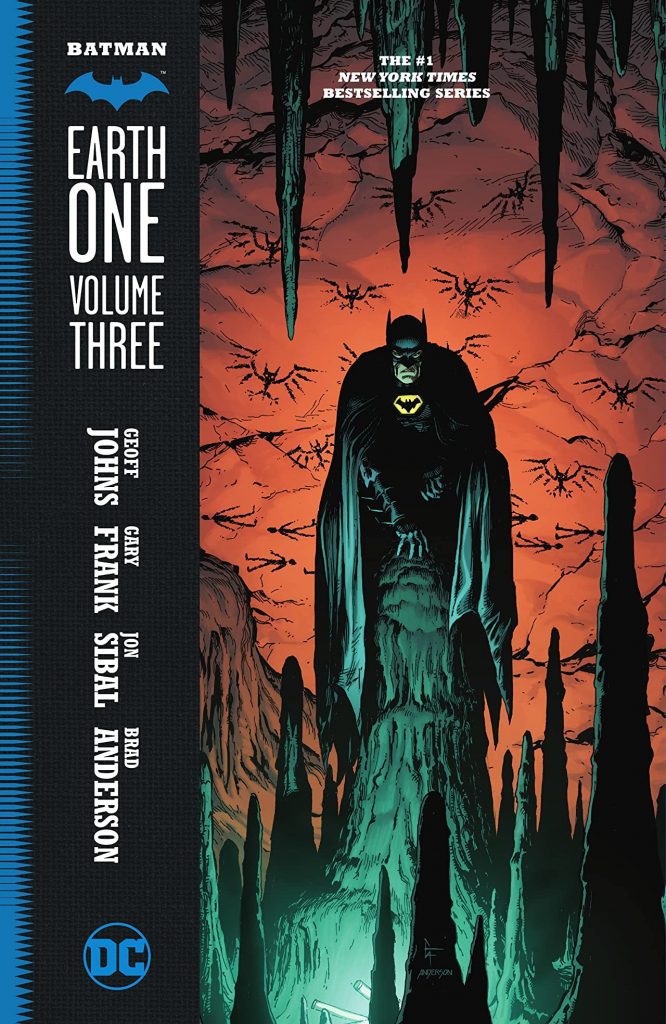 After a six-year wait, the all-star team of Geoff Johns, Gary Frank, and Brad Anderson have delivered their third (and final?) volume of BATMAN: EARTH ONE.

The story picks up just a month after the last volume, with Bruce stepping up his efforts to save Gotham, in and out of the cowl. He is working closely with Mayor Jessica Dent, who is still coming to grips with the traumatic loss of her brother, Harvey. His death left scars, both physically and mentally, that become more apparent as time goes on. As Bruce deals with philanthropy, Batman is dealing with escalation. Violence is cranking up in the streets, with street-level crooks getting their hands on high-powered weapons. Their dealer? Harvey Dent.

While that seems like a good basis for this story, there’s SO much more going on. Killer Croc is an excellent supporting character, delivering comic relief, loyalty, and touching moments with a pooch. Catwoman (teased from the last book) is true to form, toeing that line of ally and enemy. Alfred isn’t as involved as before, but still has plenty of minor moments. The same goes for Gordon and Bullock.

As the cast continues to grow, Bruce reveals very early on that he can’t fight alone. He needs help…and he gets it.

Upon the first read, I thought this idea came out of nowhere, and just dropped on us readers. I didn’t get the sense from the EARTH ONE storyline that Batman was feeling alone and needed a team. However, upon reading the three volumes at once, it does work. Johns does a great job of building off of that idea as opposed to simply making it happen (read the book and that’ll make sense).

There’s another inclusion in this volume that had me scratching my head: Adrian Arkham. I wasn’t against this character, I just didn’t know what to think of him. We spend time with him and get some exposition, but I still had my guard up. It just didn’t feel right. But the Arkham lineage plays a big factor in his story, touching on moments we read in the previous books. Some of it works (Arkham “spirits”), some of it doesn’t (Martha had “struggles”). By the book’s end, it comes together pretty well and will improve upon rereads.

One thing that didn’t work well for me was the Harvey Dent angle. At the end of the last book, we saw what happened to him and a reporter was at the funeral on TV confirming his death. Yet here, he’s alive? No spoilers, but it was hard for me to jump on board with that storyline because I didn’t believe it. There was a good attempt of using Harvey Dent here that’s different than what we’ve seen before, but how it was done was a bit of a mixed bag for me.

Enough with the story. How about that art?! Gary Frank is — and has been — delivering top-notch images. I really love the clean, detailed cityscapes he presents on each page. I love his character work, especially those eyes. Nobody can focus on eyes the way Frank does. He’s grounded this universe in reality, which is an approach that surely gets debated, but I think it works. His action is crisp and clear, while his smaller, dramatic moments also get us invested. Gary Frank hit another home run here, with incredible coloring from Brad Anderson, and inks from Jon Sibal.

Is BATMAN: EARTH ONE, VOL 3 worth the wait? I’m not sure. It’s a good story, that builds on what comes before, and leaves us with plenty to build on (more in a second). The story is coherent and moves along, but gets a little bogged down with misdirection. Twists and turns felt like they became a focus, and that’s where some beats got clunky.

Overall, I did enjoy the book and have already read it three times. There are many additional reads in the future as well.

Speaking of the future, this book was promoted last month as being the finale of the BATMAN: EARTH ONE story. So after reading the book, and seeing that final page, I went to Twitter and asked Gary Frank himself if the ad was true? His response…

Well, we didn’t know they were putting that there.
So, honestly, I don’t know.

I guess we will wait and see. I just hope it doesn’t take 6 years to find out. – Ryan Lower