Obtaining the Campaigns list from the server has failed!
Server response:
CM Ad cahger Server plugin is not active on https://legendarygroup.co/admanager/
You Are Here Home Batman on Film BATMAN: THE ADVENTURES CONTINUE S2 #6 Review

SYNOPSIS: Former Mayor Mayfield’s influence over Gotham grows as the campaign picks up speed. As Batman and his team investigate where Mayfield has been, Batgirl decides to infiltrate the campaign herself. How is Mayfield charming his way around Gotham, and why are clues pointing to Arkham Asylum? 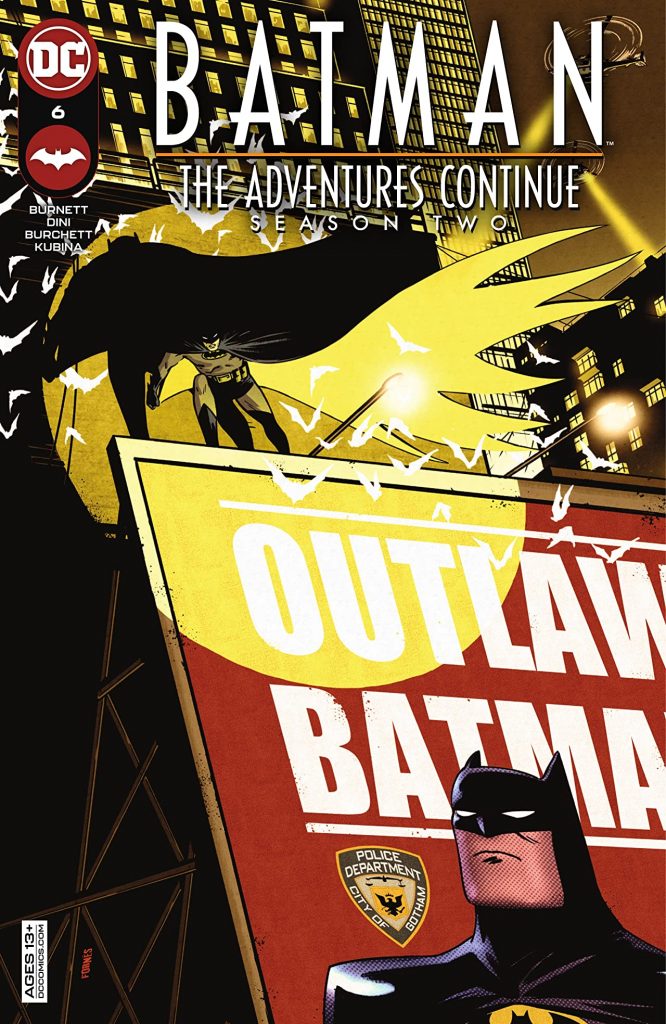 “Mayor Mayhem, Part Two” deepens the intrigue in Gotham City as Burnett and Dini flesh out the political landscape in the BTAS universe. Not only do we see that Dick Grayson has ties to Hamilton Hill, Jr., but we hear why Bruce Wayne tends to not give out endorsements (unless, of course, he believes in Harvey Dent). Unfortunately, this mayoral race isn’t an even playing field…

Emerson Mayfield seems to be armed with the power of persuasion now, starting to influence his most vociferous opponents. My guess is there’s something to his cane that he’s relying on. Odds are there’s something mystic about its lion-headed topper. Whatever the reason, it’s spelling trouble for Hill, Jr. and The Batman, not to mention Bruce Wayne, who gets cornered into saying something positive about the former mayor on camera.

The downside to this new trick of Mayfield’s is that it doesn’t come off as well in comic form. With voice acting and a musical score, it could be highlighted more, but on my first readthrough, it almost passed me by, until it becomes more apparent later in the story.

Much of this issue’s action revolves around Clayface, which makes for some challenging moments for The Dark Knight. It’s not hard to deduce in his initial disguise that it’s him fighting Batman and that isn’t the point. The point is how he is escaping Arkham and the mystery of who is assisting him. There’s a bit of fun seeing Batman confront Mayfield and Clayface in their respective habitats, making it feel like a classic ‘70s Bat romp, when The Dark Knight was dealing with Rupert Thorne and the like.

Burchett’s art is very similar to the last issue. Always on the character model, but there’s something unpolished about it that I can’t place my finger on. He does get to show off various members of the Rogue’s Gallery thanks to the malleable Clayface. Kubina’s colors add depth and dimension to the art, really making the simplistic style of BTAS pop!

Some of the more recent issues have felt like they could very easily be translated into an episode, but this one feels very much like a comic book. So many plot threads are continued and it doesn’t feel like this chapter could stand alone without what preceded it. That’s not to say it isn’t a good issue, because it is. I love how Burnett and Dini give us both sides of Bruce Wayne, public and private, in addition of course, to Batman. With the amount of different scenes-intimidation, interrogation, and action, you feel like you get a full meal of The Caped Crusader and his supporting cast! – Javier E. Trujillo