You Are Here Home Batman on Film BATMAN: THE ADVENTURES CONTINUE SEASON 2 #1 Review

SYNOPSIS: Gotham City is changing. After Mayor Hill is killed by a mysterious assailant, Batman finds himself tracking down an ancient order that’s long been buried under the streets of Gotham: the Court of Owls. But what does this group have to gain from the death of Mayor Hill, and how can Deadman help The Dark Knight? 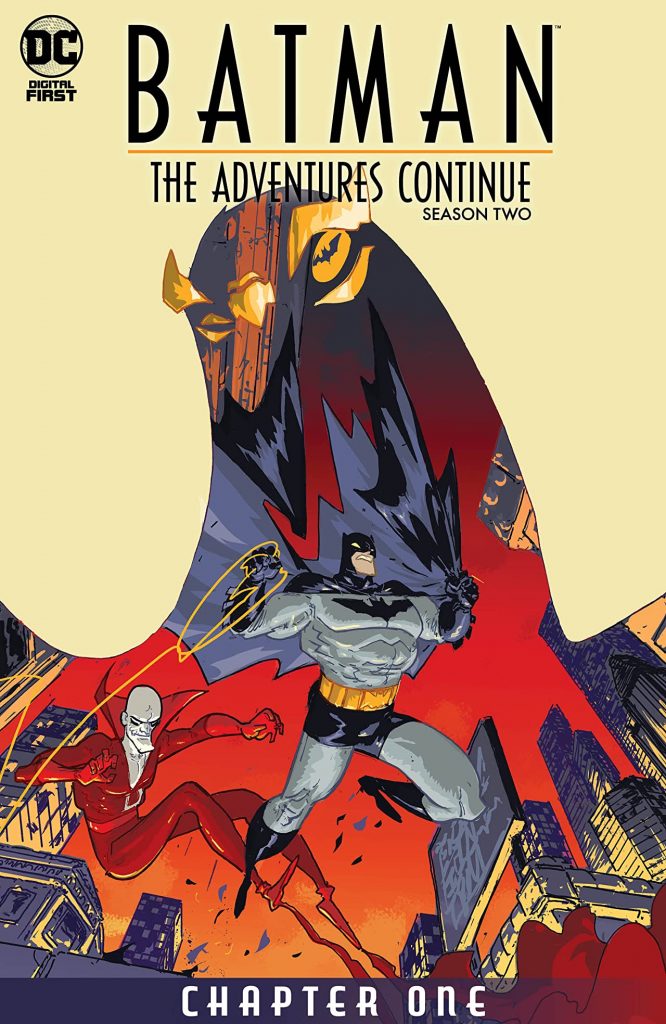 After season one concluded 6 months ago, Burnett, Dini, Templeton, and Kubina are all back to continue Batman’s animated adventures and they are more daring and bold than ever!

Before you think that’s hyperbole, not only do they kick things off by killing Gotham’s long-standing mayor, Hamilton Hill, but the Court of Owls is responsible! Even though this is their first appearance in the B:TAS universe, don’t think they’re being watered down! They are every bit as deadly as their comic counterparts and Mayor Hill isn’t their only target!

Joining The Dark Knight in this dangerous new beginning is Deadman! His special abilities prove to be ineffective against the Talons, but Burnett and Dini give him a chance to shine when he takes over the body of Veronica Vreeland, a longtime love interest of Bruce Wayne, in a sword fight with Talon!

Veronica isn’t the only returning face from the show as we get reintroduced to her father, reporter Summer Gleeson, and Mayor Hill’s son, Jordan. If it wasn’t a difficult enough childhood running away with The Joker, now poor Jordan has to contend with a brutally murdered father. Maybe he can be the next Robin? I don’t think so. They’re not shaking things up that much (I hope).

Beyond being the crazy general trying to rescue his daughter in Harley’s Holiday, General Vreeland happens to be an unofficial expert of sorts on the Court of Owls, having collected several antiques as evidence over the years. My hat’s off to Burnett and Dini for how they weave in this secret history of the Court and tie it into the Vreeland family, establishing that they’ve been operating in Gotham for over a century.

The particulars are set up very well and it’s excellently paced, going from shocking murder to character introductions, to a big action scene in fairly rapid succession. However, the story doesn’t just end there with that first encounter. Unlike last season, where two digital chapters were combined into one print issue, this is a regular-sized comic, and as such, feels like more of a full meal as the story continues to progress. Yes, you’re getting your money’s worth here.

Visually, this is consistent with the look and feel of The New Batman Adventures. Character models are on point for all the regulars and Talon’s design easily makes the transition to this new aesthetic. Templeton and Kubina can do no wrong as far as I’m concerned and I’m so happy they came back. Their art and colors combine to make you feel you’re looking at screengrabs from an episode you’ve never seen and let the reader easily hear the voice actors perform in their head.

I may have been in an apathetic mood the day they announced this book returning, but now that I’ve read it, I am so glad it’s back for another round! I’ll say it again, it really benefits from the longer-issue format and by now Dini and Burnett are so deft at interpreting classic Batman stories into a new tapestry that no matter your level of Batman fandom, you can pick up this issue and find something to enjoy about it! By killing the Mayor off right from the start, the stakes have been elevated and I didn’t feel anyone was safe, not even our heroes! In fact, I was dreading the possibility that a Talon might attack Tim! So head back to the (animated) Bat Cave as Batman faces what may be his greatest challenge yet! Same Bat-Time, same Bat-Comic! – Javier E. Trujillo