You Are Here Home Batman on Film BATMAN: THE DETECTIVE #5 Review

SYNOPSIS: Equilibrium unmasked! Falling further behind the villainous Equilibrium, Batman enlists the help of the European Alliance of the Bat in hopes of turning the case around! With Squire in tow, the Dark Knight attempts to thwart a mass execution in Belgium in brutal, epic fashion! 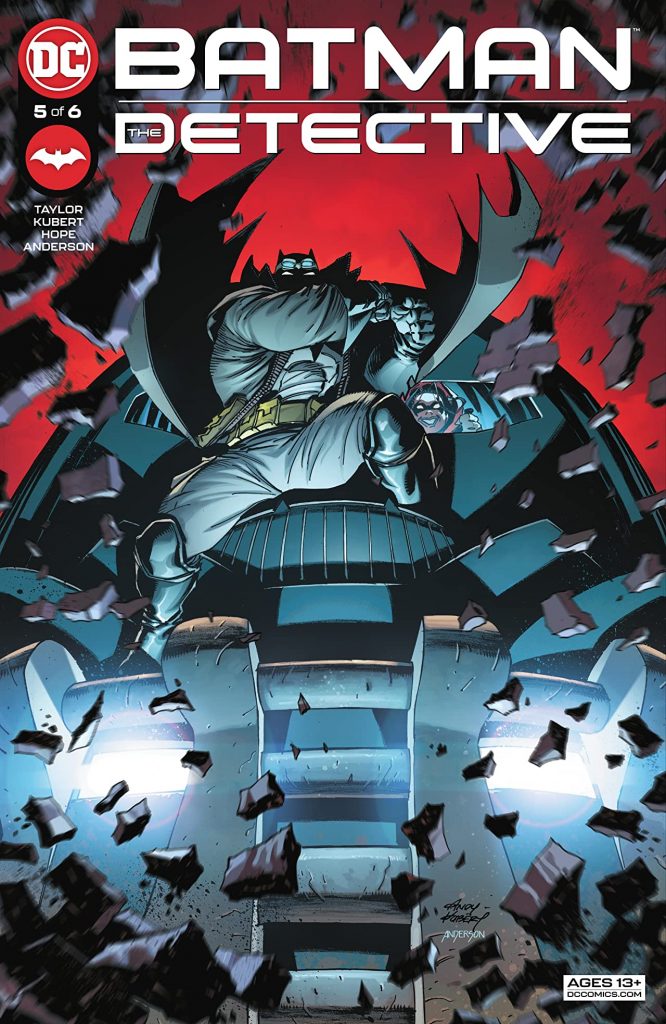 After a month off, we’re back in Europe with The Dark Knight.

We pick up right where we left off last issue, cruising with our hero in his Batcavemobile. He’s contacted The European Alliance of the Bat (of course he has one) to help him track down Equilibrium. It doesn’t take long, and Batman encounters a hostage situation that’s about to go from bad to worse. Some heroics ensue, and we are set up for what’s sure to be an exciting conclusion.

Writer Tom Taylor has embraced the comic book medium for this Batman story. It’s flat-out fun, that’s giving us something new, yet familiar, and makes me want to read it over again when I’m finished. Status quo Batman is my favorite, so I want him in Gotham. However, Taylor has a reason to bring The Dark Knight across the pond and makes sure we readers remember it too. This villain is focusing on people Batman has saved in the past, and we finally find out why in a heartbreaking flashback.

Andy Kubert continues to do what he does best: draw kickass panels. He, too, embraces the medium and gives us some really cool action shots. He also nails the smaller moments. A panel of a Batcavemobile crashing through the side of the building makes just as much of an impact as the small aftermath of a two-vehicle crash, keeping us readers focused and in tune with every detail of the story. Brilliant.

BATMAN: THE DETECTIVE has been a blast to follow, and I’m excited to see how it wraps up. Tom Taylor and Andy Kubert have crafted a solid Dark Knight story that is surely going to be capped with an unpredictable, yet satisfying, conclusion. – Ryan Lower