SYNOPSIS: Harley’s pursuit of the Golden Age killer gets personal. Still in the fog of her discovery about Hector’s obsession, she relives her darkest memory of Jack’s transformation into The Joker-and her own early evolution into Harley Quinn. With Bruce’s counsel, she grapples with the guilt of her past and makes a choice that sends her straight into Starlet and the Producer’s den for an expertly staged showdown that will either crack the case or end her life. 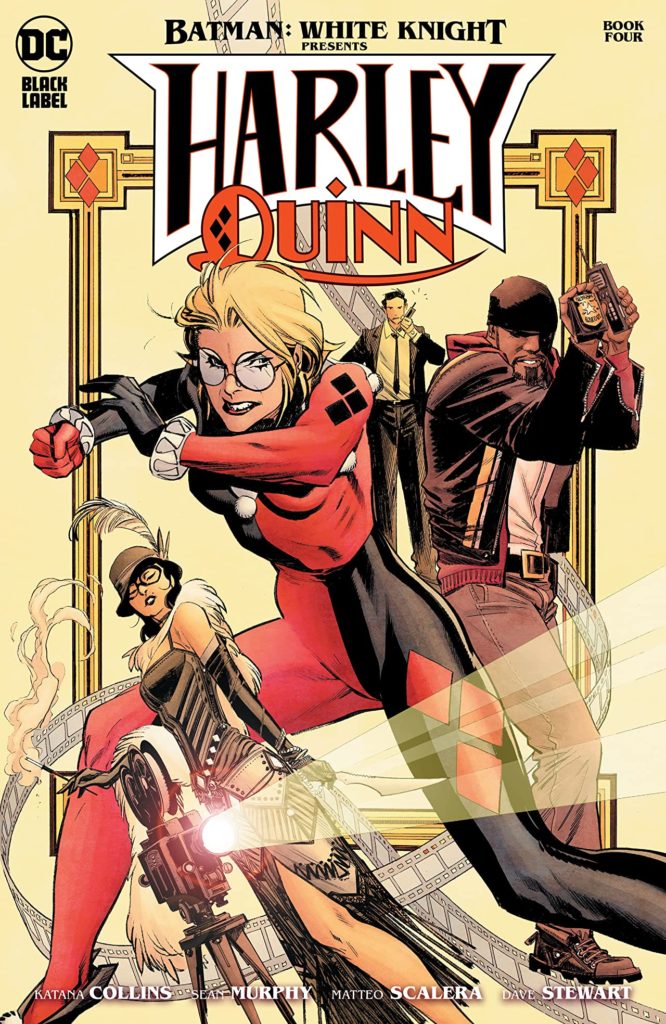 This Harley Quinn adventure continues to be a comfort read, and that’s definitely meant as a compliment. While the WHITE KNIGHT universe thus far has been full of surprises, emotion, and big action sequences, HARLEY QUINN continues to play it calm, cool, and collected with a mystery slowly revealing itself.

After raising doubt in her partner last issue, Harley continues to be on edge with who she can trust, and how much she can rely on someone else. This leads her to a visit to Arkham to speak with Bruce Wayne (something I’d never think I’d see in a comic), devolving into an appropriate flashback that adds more layers to the Harley/Joker relationship. The conversation sparks a trip to a certain location, where she comes face-to-face (to face?) with the one(s) responsible for Gotham’s latest murder.

I’ve said it before, and I’ll say it again, this book continues to separate itself from the WHITE KNIGHT stories written by Sean Murphy, but it most certainly fits into this world. Writer Katana Collins has crafted an interesting mystery and managed to do it without Gotham’s most famous rogues. And just like a good mystery, pieces are slowly snapping together but not enough to reveal the entire picture. I’m excited to see what she has in store for us in the final two issues.

Matteo Scalera continues to flawlessly create a unique-looking Gotham and its characters. The coloring in particular seems like a blend of traditional and paint, creating a soft, yet dark, atmosphere that only complements the dark undertone of this story. I’ve really become fascinated with his style and look forward to the coming issues.

Overall, chalk this up as another solid issue from this spinoff series. There are only two issues left but feels like we’re just getting started. – Ryan Lower