SYNOPSIS: “We don’t choose who we save, Bruce. You treat the patient who needs your help.”-Thomas Wayne “Shadows of the Bat” begins here! In the prelude to January’s epic new Detective Comics event, Mayor Nakano has signed off on the construction of a new Arkham Tower in the heart of Gotham City, and the Bat-Family is torn. Batman has long seen Arkham as a necessary, if flawed, cog in the gears of Gotham City-a temporary solution to larger problems that in many ways mirrors his approach as Batman. Nightwing, however, who grew up watching Arkham mutate into a villain factory, believes a different approach is needed. But Bruce and Dick will need to see eye to eye on more than just Arkham Tower, as a new villain known as THE MAEGER MAN wreaks havoc in the streets and becomes the embodiment of Gotham’s broken system! 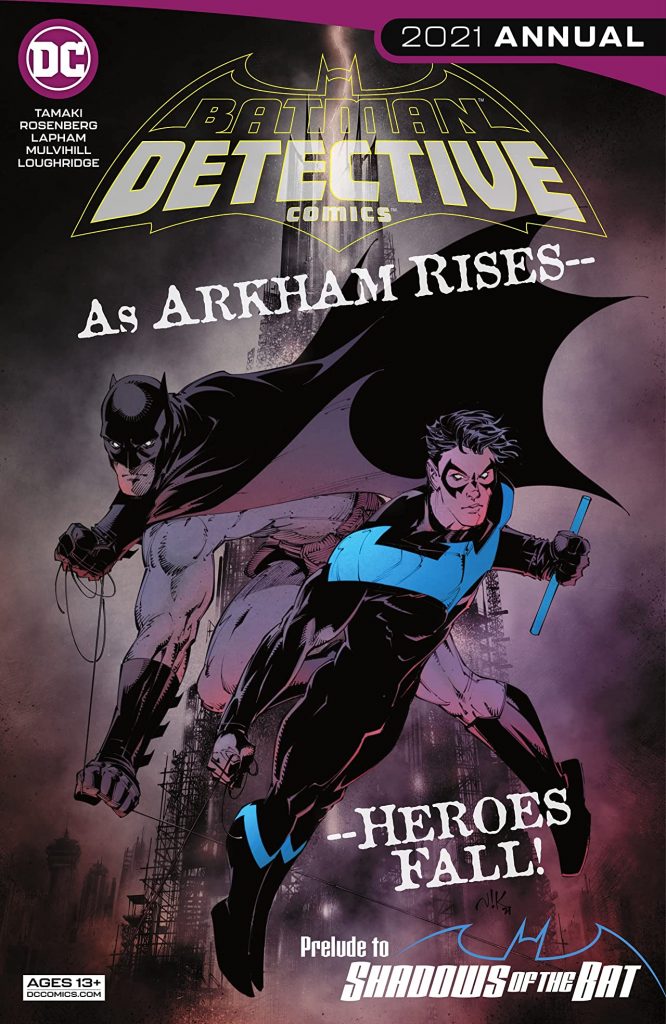 It’s annual week at DC Comics!  With a whopping seven total annuals printed this week, one of them happens to be Detective Comics.  Regular writer Mariko Tamaki shares, writing duties with Mathew Rosenburg in the first issue of Detective post-FEAR STATE.  David Lapham, who has been illustrating the backup stories in Detective, is our artist.

The central theme of this annual is that it all comes full circle.  As we have become accustomed to in Detective, the reader is privileged to follow those Tamaki breadcrumbs, and boy are they present.  This issue feels like it is all Tamaki; I see her fingerprints over everything in this story.  As we have seen previously in this run of Detective, all the critical characterization elements are there.  Here Tamaki and Rosenburg strike gold with their writing of Thomas Wayne.  The classic Doctor,  always on call waiting to serve.  It’s nice to see with all the negative portrayals we have seen of late. Then the writers do a fantastic job with Batman and Nightwing.  The banter is vintage, as is the detective work.  This is Detective Batman we got from Tamaki very early in her run, and it’s a joy to see him back in action.  No one challenges Batman quite like Dick Grayson, and this version of Dick has the stones to stand up for himself not only to Batman but the GCPD as well; here, Tamaki and Rosenberg push the limits.

David Lapham has a chance to show off his Matt Wagner/Martin Morazzo style art for an entire issue.  With two backstories, my only previous reference to his work, I enjoyed Lapham’s work on the book.   Some panels make me think of Morazzo and Ice Cream Man, while others have the feel of Wagner and Mad Monk.  Lapham draws emotion and expression well, the book flows.  I love the panels of Batman and Nightwing running rooftops; this is one for the lock screen crowd. At some points, young Bruce and Nightwing did look a bit wonky, but that is me nit-picking something out of a good book.

On a week filled with annuals, I would suggest adding Detective Comics to your pull list.  The issue is a solid tale weaving the influence of Thomas Wayne with the detective skills of Batman and Nightwing.   The nonlinear storytelling allows the reader to get the full circle effect as the story hits close to home for Bruce/Batman.  It’s a new day in Gotham, and we have just taken our first step out into the city. – Peter Verra

SYNOPSIS: TALE OF THE TAPE! The League of Lazarus has introduced Robin to a wide range of some of the youngest, deadliest fighters on the planet-from XXL and his hype squad to Respawn and his Deathstroke fandom-and these killers mean business. But no fighter has made an impact on Damian Wayne like Flatline, the former sidekick of Lord Death Man and one of the most elite combatants in the tournament. But who is Flatline? Uncover the secret origin of all the breakout fighter stars of Robin in this oversize special that puts the K.O. in comic book! Plus: Atlantean fighters join the tournament? C’mon, Mother Soul, never order the fish-always order the steak! 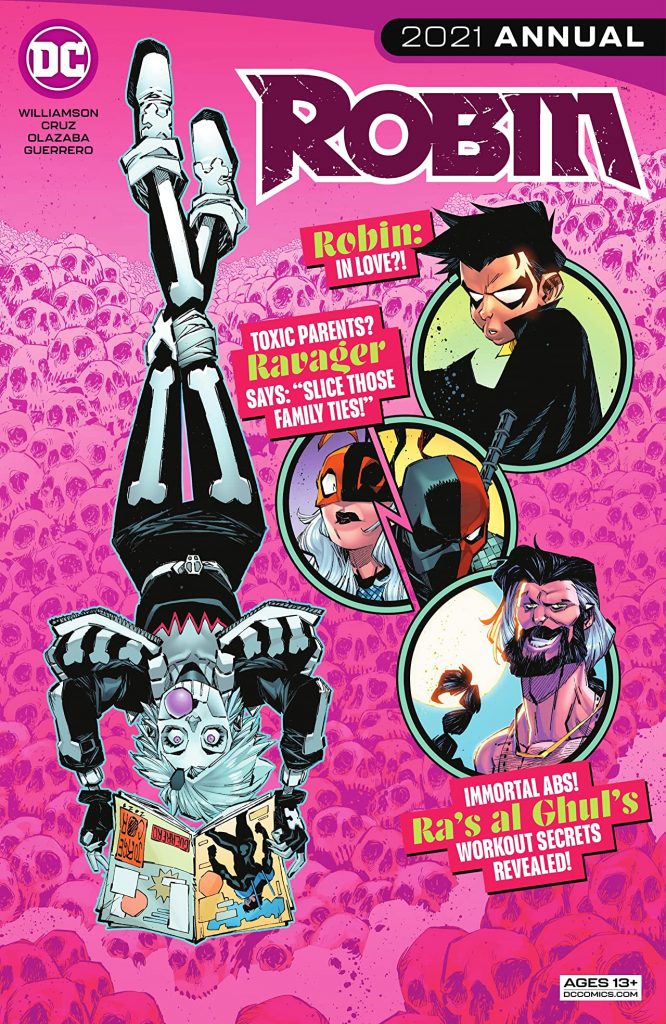 Who’s ready for some flashbacks?

Taking place before Robin #6, this year’s annual gives the reader insight into the opponents Damian has been facing, namely Flatline, Ravager, and Hawke, with quicker profiles done on Black Swan, XXL, and The Drenched.

Flatline gets the largest focus and rightly so. She’s been the breakout character from these new fighters and despite her bleak upbringing, there’s a sense of fun that comes with the character. Maybe it’s her ties to Lord Death Man, who’s a bit of a ridiculous, over-the-top creation himself. Williamson dives deep into her icy, Russian hitman family origins, showing her fascination with the macabre long before her powers manifest. In her own way, she goes on a Bruce Wayne-like quest, traveling the world to learn all she can, except she’s learning about murder.

There’s not terribly much in the way of revelations when it comes to Ravager and Hawke, more just a longer recap for those who may be unfamiliar with their respective pasts. And if you thought that was short, the other trio only gets a page each! ReSpawn continues to remain an enigma, so for those waiting for Williamson to reveal his secret origin, well, you’ll have to keep on waiting, unfortunately.

Roger Cruz steps in to do the art chores. His style is very consistent with what Melnikov has established as the look in the main book, with just a dash of Kubert thrown in, at least to my eyes. Luis Guerrero’s colors add the necessary vibrancy to make the art pop in just the right places, again keeping up the consistency in the visuals.

It’s fun, but in some respects comes off as filler given how it takes place three issues ago. Williamson closes on an epilogue, setting up exciting things across the Bat-Family in 2022, christened “Shadow War”. If you’re looking to learn more about Flatline, this is an easy recommendation, but outside of a tease or two, not much of the ongoing story gets advanced. – Javier E. Trujillo