According to issue #16 of solicitations magazine DC CONNECT, DC is releasing THE BATMAN BOX SET on March 1, 2022 in conjunction with the theatrical release of Matt Reeves’ THE BATMAN starring Robert Pattinson.

The set will feature 3 Batman comic book stories that influenced Reeves as he construction the film.  The stories are: BATMAN: YEAR ONE, BATMAN: THE LONG HALLOWEEN, and BATMAN: EGO.  The box art is by Jim Lee. Here’s the official description…

Rediscover the classic stories that inspired The Batman feature film! This slipcase box set includes softcover editions of three books director Matt Reeves cites as his biggest influences for the upcoming film—Batman: The Long Halloween, Batman Ego and Other Tails, and Batman: Year One. 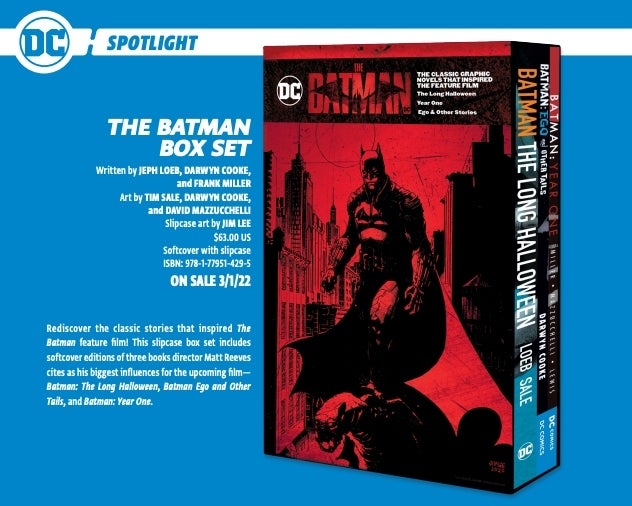 RELATED: The EGO in THE BATMAN

Of course, we knew that while not an origin tale, BATMAN: YEAR one was an influence on Reeves in terms of the noir, grounded, and street-level grittiness aspect of that story.  Reeves obviously is pulling from the “Year Two” aspect of THE LONG HALLOWEEN as well as it being a whodunit detective tale.  With BATMAN: EGO — which BOF was one of the very, if not the first to tell you Reeves was influenced by it — the inner conflict between Bruce Wayne and The Batman will be addressed in the film. – Bill “Jett” Ramey

THE BATMAN is currently in post-production.  Follow BOF’s Everything About THE BATMAN Page.  Make plans to attend BOF’s THE BATMAN Watch Party.  THE BATMAN hits theaters on March 4, 2022.