You Are Here Home Batman on Film DETECTIVE COMICS #1035 Review

SYNOPSIS: Introducing Mr. Worth! When his daughter is killed during the brutal crime wave gripping Gotham City, eight-foot-tall stack of muscle and money Roland Worth sets out on a path of revenge toward the prime suspect in the crime: Batman! The Dark Knight has been framed for murder, and to make matters worse, this grisly deed seems to be connected to yet another emerging villainous force on the horizon. It’s a rogues gallery explosions and this time there’s no mansion on the hill for Bruce Wayne to mount his counterattack! 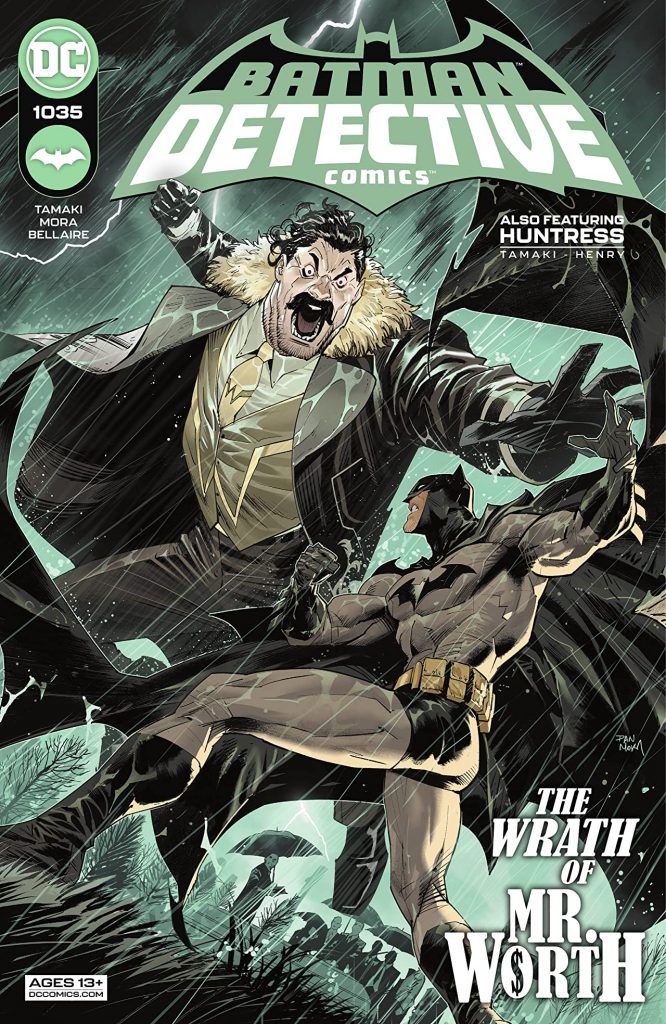 Another month, another fantastic issue of Detective Comics.

In this issue, Tamaki delivers not one but two astonishing stories. One is a gritty investigation conducted by The Dark Knight, while the other is a heartbreaking tale featuring the Huntress. Artist Dan Mora provides a buffet of incredible Batman panels for you to enjoy.  This is the book of the week!

Cover to cover, this might be the best issue of Detective that Tamaki has written since she took over duties. The reader gets a vintage issue filled with Batman, old Gotham money, crime scenes, and corruption. This book has that instant classic feel early on. As long as this arc can finish strong, it will be in the conversation.

The murder scene and politicians are perfectly balanced. Nothing in this book seems forced; it flows. Plot points, character motives are all one display and clear as can be. Tamaki’s Batman may be grounded but still very capable of solving crimes. Batman’s monologue drives the story and places you at the crime scene with him. When Tamaki’s Batman is present, he shines, captivating you.  Going step for step with Batman in the sewers of Gotham was a treat we all can enjoy, the search, the discovery, the escape.  It is just so perfect in every way. This is some of the best “Batman” I have read in any comic book to date.

One can argue that the backup story is as good as the main. The backup, yea, I know I have been very critical about backup stories since being announced. I must say if they are done this well, I am all for it. Tamaki has been teasing Huntress since Detective Comics returned and did she deliver.

This is an emotional tale with some valuable lessons for this interpretation of Huntress. This Huntress feels brand new like she has some growing pains to overcome in early her vigilante career. After only two appearances for this Huntress, and I’m getting “No Man’s Land” vibes already. She is keeping things close to the people and displays that classic headstrong Huntress attitude. Very excited to see the direction the character will go from this point on.

Dan Mora is the MVP of the book. I honestly can’t remember the last time an issue of Detective had this many amazing and stoic Batman images. Mora’s Batman has never looked more impressive. Medium close-ups, splash pages every time you see Mora’s Batman; it is a dream come true. With so many great Batman panels in this book, my favorite may come as a surprise. Batman in the sewer with his back to the reader, staring at the crime scene, just enough for you to realize what you are looking at, the light shining off the water, illuminating the foreground. It is an incredible crime scene spread. Mora continues to amaze with every issue, just when you think he can’t outperform last month he one-ups it. Enjoy flipping thought this one in hand, and the digital crowd will get their fair share of screenshots.

Clayton Henry was the artist of the backup story. If you are looking for someone to compare Henry to, I’d suggest Brad Walker. What I dig about Henry’s art is that the emotional scenes have that old-school solid color background. I thought that was an exciting choice.

There are not many better ways to spend your $4.99 in a comic shop this Tuesday. Detective Comics #1035 is the crown jewel of Tamaki’s early run. Two tales filled with reflection from both hero’s. Luring the reader in with heavy hearts and the Fugitive level action. Artist Dan Mora is staking his claim in the best Batman artist category with every issue. If you enjoy detective Batman, this is the book for you. If you are a Huntress fan, you will be overjoyed that the character is back in a big way. This book delivers on all levels and is required reading for your pull list. Enjoy! – Peter Verra