You Are Here Home Batman on Film DETECTIVE COMICS #1042 Reivew

SYNOPSIS: Batman rampages through the underworld of Gotham! Driven to a violent madness courtesy of the Jury’s “Vile” serum, the Dark Knight crushes bones, makes a scene, and gives costumed vigilantes in Gotham a very bad name. But will the Jury’s plan backfire? Can a violent rage-machine packed with money, weapons, and an insatiable bloodlust possibly end well for Mr. Worth and his Jury? That giant plunge from a building might be the answer… 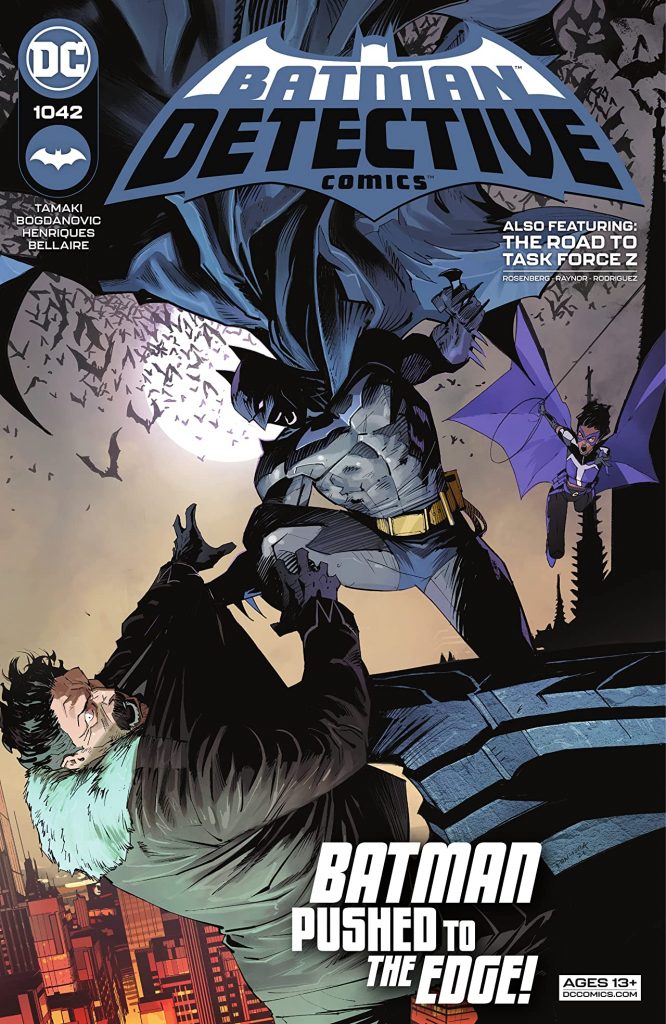 The last time we held an issue of Detective Comics in our hands, we got those Batman ’66 cliffhanger vibes.  Well, here we are, same Bat-time, same Bat-place.  Writer Mariko Tamaki has done a fabulous job keeping readers on the edge of their seats and clenched to every page issue by issue. Now is the time for the conclusion of her first Detective Comics arc.  So, let’s get right into it, BOFers!

Since taking over duties, Tamaki has brought us a down-to-earth Bruce Wayne, introduced new characters while rejuvenating characters we all know and love.  But how did the first arc go?  Well, if you are asking this reviewer, I think Tamaki has proven beyond the shadow of a doubt that she is more than capable of hanging out in some of Gotham’s darkest places.

What Tamaki brings to this issue is the exploration of mental toughness that so few writers have only even dared to attempt, Denny O’Neil, Grant Morrison, Scott Snyder, and for a deeper cut Joe Lansdale.   Tamaki continues to bring elements of horror to the story.  Hugh Vile is a character that you would expect to see pop up in a Swamp Thing book and not Detective.  Some fans might think this goes a bit far with the science fiction elements, but it does bring something new to the table and creates a captivating tale.  Here we thought we were getting a grounded murder mystery with Bruce Wayne at the center that has turned into a phycological horror story that you did not see coming.  Tamaki is a master at deception, and this is a skill that I applaud.

If I had to nitpick the book, it’s not about the sci-fi at all but another brawl between Batman and Worth.  While this was the most significant showdown between the two, I think it would have hit harder if this wasn’t seen so often in this arc. The psychological moments blend well with the scary moments, and when you think you have seen it all, Tamaki proves Batman needs more than brute strength to defeat his enemies.

What I love most about Tamaki is that she has brought a level of unpredictability to Detective Comics.  I never expected to see this story take the sci-fi angle, and I’m highly impressed that it did.  This type of storytelling was an element lacking in Detective, even under the great Peter Tomasi.   Tomasi’s Detective run was a pure superhero, and there is nothing wrong with that. That is why we are here.  We love superheroes!  Tamaki is one arc in, and she has tricked me three different times with this tale alone.  My anticipation for every issue has been through the roof. There is something so fresh about this take on Batman.  You have no idea what to expect when you pick up this title, and that is just the way I like it.

Artist Viktor Bogdanovic once again graces the pages of Detective Comics.  It has been a bit of back and forth on artist duties between Bogdanovic and Dan Mora.  I have said in numerous reviews that Bogdanovic’s art is nothing to sleep on.  At times he will make the reader feel like they are looking at the art of Greg Capullo. Their Batman is very similar, especially in the cowl.  Bogdanovic, at times, delivers this Sin City/Kevin vibe to the book.  The way he uses shadows and reflection in the eyes is a unique style, and that emotion transcends the page. You don’t need word bubbles or description boxes to know what is going on.  It’s all there for you visually and perfectly paired with the script to enhance the reading experience.

There are some downright frightening splash pages of Batman in this issue.  The pages that stick out are when Batman seems to have succumbed to Vile’s parasite.  It’s almost like Batman is having a Xenomorph burst through his mouth and not his chest.  The other is the rooftop confrontation with Worth.  These are the most Michael Myers that Batman has ever looked.  That quiet and still danger with lightning in the background is more than enough to sends chills down the reader’s spine.  Then to see Tamaki and Bogdanovic work hand in hand and show the strength of Batman’s mind on the rooftop with the handcuffs is another magnificent moment to behold.  Mr.  Bogdanovic is always welcome on an issue of Detective Comics, never a disappointment to see his name on the cover.

The backup story written by Matthew Rosenberg and drawn by Max Raynor is such a pleasant surprise. Hard-nosed reporter Deb Donovan teaming up with the Red Hood is one most beautiful Odd Couple pairings we did not know we wanted.  The setting and writing of this backup are unique, and I can’t think of a more enjoyable interpretation of Jason Todd.  That is saying something with all the great takes on the Jason Todd/Red Hood character we have gotten lately in Batman: Urban Legends and HBOMax’s Titans.  I am eagerly anticipating how this story unfolds.

Detective Comics #1042 has everything you want to see in Gotham City. A remarkable conclusion to a new writer’s first arc.  A murder mystery with twists and turns around every corner sprinkled with the perfect about of science fiction.  A dive into the psychology of the Dark Knight as he battles new and old foes.  A backup story that cleans the palette with humor and two characters that you never thought of pairing together.  If you are looking for a perfectly balanced comic book, look no further than Detective Comics #1042.  It’s that damn good.  The only question I have for Tamaki and company is, how can you top this? – Peter Verra