You Are Here Home Batman on Film Keaton on THE LATE SHOW: Yeah, The Batsuit Still Fits! 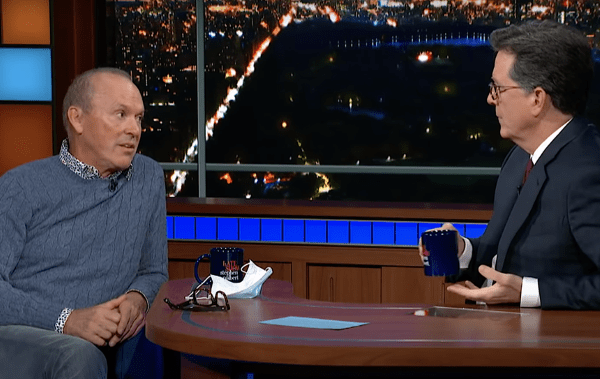 Thanks and a shoutout to BOF Senior Contributor Peter Verra for the heads up on this story!  Now, let’s get to that story…

While guesting on THE LATE SHOW, host Stephen Colbert asked Michael Keaton if his Batsuit for THE FLASH still fit.  Here’s MK’s response…

Of course, MK isn’t actually wearing any of the suits that he sported in either BATMAN (1989) and BATMAN RETURNS (1992), but it’s obvious the suit (suits?) he’ll wear will resemble those he sported back in the day.  But as a dude who is fixin’ to be just 14 years younger than Mr. Keaton — and one that that prides himself of staying in shape — the fact that he’s playing Batman again at the age of 70 is F’n awesome!

Additionally, Bill Blazejowski said it was “great” to play Batman again and pondered just how many Batmen (Batmans?) on film there are nowadays.  “I don’t know how many there are, like 77 Batmans (Yes, I agree with MK that the proper plural version of Batman is Batmans),” he said. “They should form their own union.”  Check out the video below.

And remember, Barney Rubble, is one hell of an actor, right? – Bill “Jett” Ramey