You Are Here Home Batman on Film MAN-BAT #2 Review

SYNOPSIS: Man-Bat is on the run from the law following a horrific night of blood and mayhem on the streets of Gotham. But the police aren’t what Kirk Langstrom’s monstrous alter ego should worry about…it’s Task Force X, better known as the Suicide Squad. To undo the damage he caused, Man-Bat must seek out a cure for the innocents he has injured, all while staying out of the deadly sights of the world’s most dangerous mercenaries! 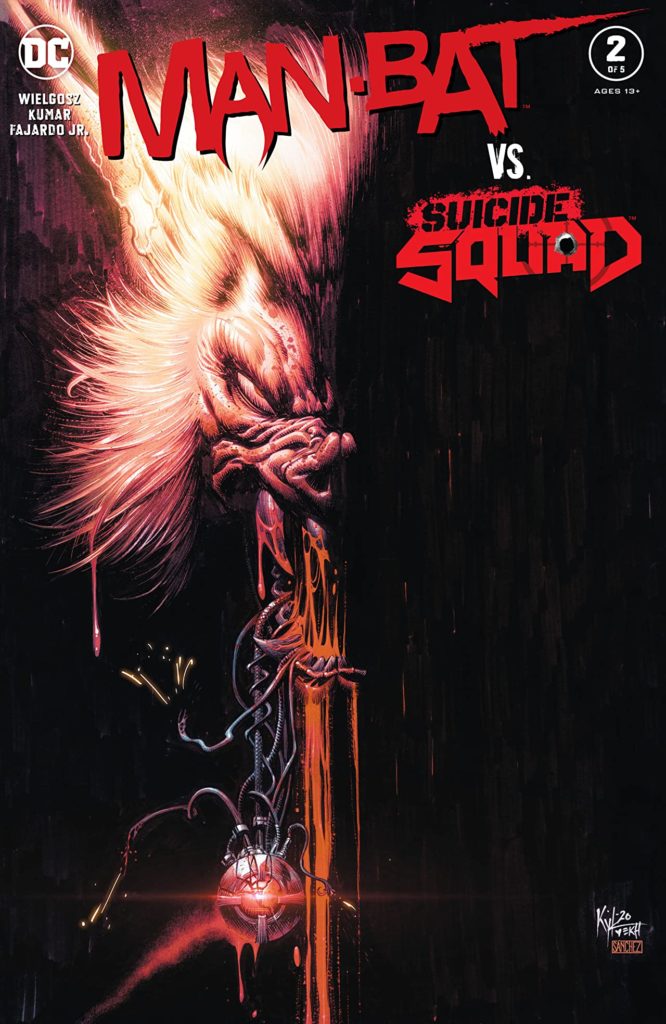 Man-Bat is one of the Gotham Underground members that hasn’t gotten enough credit over the years.  Batman: The Animated Series “On Leather Wings” will always be the defining moment of the character’s history for some. Grant Morrison used Man-Bat as a plot device in the early 2000s, and the character has popped up here and there from the 2014’s animated film Son of Batman and the 2015 Arkham Knight video game the highlights.  But here, in the fourth volume of his series, we see something unique and new from writer Dave Wielgosz.

Man-Bat issue two picks right up where we left off.  Wielgosz doesn’t miss a beat. We get the personal motivation that drives Kirk Langstrom from his past, the pain and guilt of his present mixed with the internal monologues of Man-Bat.  Everything that made issue one such a pleasant surprise works just as magnificently in issue two. So how does Wielgosz top his previous work? By introducing Task Force X, that is how!  Wielgosz is at his best on this issue when he is handling the tactical aspect of the Suicide Squad.  Flag’s direction, the back-and-forth banter between Deadshot and Boomerang, the brute strength of Killer Croc, and the impulsiveness of Harley.  Wielgosz aced each one of these characters.

The book’s two moments that stand out are the confrontation between Killer Croc and Man-Bat and Harley’s shining moment with Man-Bat.  For the big event, Wielgosz captures both sides flawlessly.  You get the raw brute strength and cocky attitude of Waylon Jones while utilizing the new intelligence angle for Man-Bat. An accurate display of brawn vs. brains.  I cannot decide whose dialog I enjoyed more in the scene.  It is truly an incredible display of two sides of the same coin. I must say that Wielgosz knows how to end a book. In the first issue, he teases the Suicide Squad at the end.  Here, he perfectly uses Harley Quinn and both comic relief and a stinger.  Harley is not in the book much, but she makes her presence felt in the most Harley Quinn way possible. It is a moment that will make you grin as if you got doused with Smylex gas.

Illustrator Sumit Kumar returns as the artist of this issue.  Kumar’s artwork in this book is on par with last month’s tale, but two blips are on the radar.  One panel of Deadshot almost looks like Humpty Dumpty jumping out of a tree and one where a charging Killer Croc looks a bit awkward.  In those two panels, the anatomy looks off, but that is not to say the rest of the book isn’t good.  Kirk and Francine’s opening scene on the rooftop is drawn beautifully with tons of expression and emotion on their face, and Kirk seals it with a kiss.

I love what Kumar did with these backdrops. Seeing the Suicide Squad in a country setting is a welcome change of pace. My favorite panel in the book is seeing a serene Harley Quinn sitting looking beyond the lake like she is on vacation.  There is something peaceful and almost Bob Ross about these panels. Kumar does an excellent job with the Croc/Man-Bat fight, except for the charge.  The panel of Croc strangling Man-Bat underwater is a stunning piece of violent artwork.  Kumar lets you right through the semitransparent water, perfectly displaying the ferocity with that Bob Ross-Esque forest background.

Kumar does a fantastic job with the “monsters” in this issue.  They both have their moments where they look terrifying and robust. I already enjoy his Man-Bat from issue one; his design for Killer Croc is perfect.  Kumar keeps it simple and doesn’t overdo it with Croc.  He is oversized, built, and humanoid with just the right amount of crocodile, avoiding making him look like the Spider-Man villain the Lizard, there is that perfect balance, and Kumar knows it.

Man-Bat issue #2 is just what comic book fans will love about the medium.  An emotionally driven story filled with Gotham City’s most dangerous characters.  An insane clown, a hitman, a freak in a mask, and two meta-humans; what else does a Bat-fan need? Sounds perfect to me!  Dave Wielgosz does a good job balancing action-packed chaos and a story of a man looking for redemption who just so happens to get caught up with all the wrong people.  Sumit Kumar mixes comic book pandemonium with a painter’s finish. Kirk Langstrom has gotten himself in some serious trouble, and I cannot wait to see how he tries to get out of this. – Peter Verra