You Are Here Home Batman on Film NIGHTWING #84 Review

SYNOPSIS: When the Bat-Family receives misleading information and incorrect directions from Oracle, ones Babs didn’t send herself, they realize Oracle’s system has been hacked! But who is powerful enough to break into Oracle’s own super-secure network? And what personal information is now at risk? Not only that, this mysterious Anti-Oracle is taking advantage of Gotham City’s state of fear and has bombarded the city with falsities, spreading even more fear. With the Bat-Team’s comms unreliable, Nightwing heads to Gotham to find the source of Anti-Oracle’s transmissions. 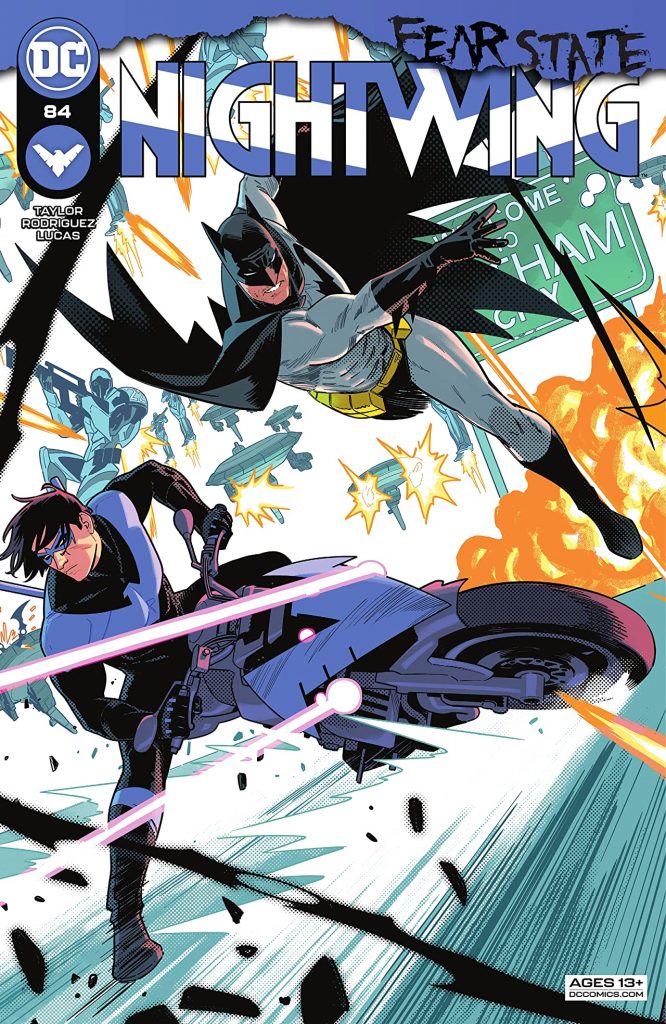 NIGHTWING #84 takes a detour from the character’s ongoing Bludhaven story to crossover with FEAR STATE in Gotham. Being behind on Batman comics I was uninitiated going into this one.

We begin with Nightwing doing the usual superhero-monologue-on-top-of-a-skyscraper-roof-routine. Luckily he brought a slice of pizza so it isn’t too brooding a scene.

While fighting bad guys is a familiar burden, Dick Grayson takes in the fact that his campaign to save Bludhaven with his newfound wealth is definitely unfamiliar territory.

This moment of reflection is cut short when he’s called to Gotham by “Oracle.” Gotham is now being overseen by the dystopian-like Magistrate, the once beautiful zeppelin patrols replaced by hovering surveillance drones.  And, if you ask me, their enforcers look a lot like BATMAN BEYOND villain Shriek.

Go figure, the call Grayson received is a trap.

NIGHTWING #84 is not just a departure story-wise but an artistic one, too. Robbi Rodriguez (co-creator of Spider-Gwen, artist for X-MEN and SPIDER-MAN on the Marvel side as well as CATWOMAN and the REBIRTH HOLIDAY SPECIAL for DC) temporarily takes over for the brilliant Bruno Redondo.

The art took some getting used to, with the action drawn too close to get a feel for what is happening. But I liked the exaggerated features (such as Grayson’s grimace at receiving a garbled radio signal and Bitewing/Haley’s surprised look after being woken up).

Plus, whatever reservations I had about the art went away after a page when a certain Dark Knight made an entrance.

NIGHTWING #84 also includes an appearance from Bridget Clancy (runs a quick Bing search, she was a Nightwing character from 1996 to 2002 and one of Grayson’s many old flames) who gets the honor of taking care of Haley while Dick is gone.

Even though NIGHTWING #84 takes a different artistic and story tone it’s another swell addition to the series. – James Armstrong