You Are Here Home Batman on Film NIGHTWING #85 Review

SYNOPSIS: Babs takes the Anti-Oracle attack on her Oracle Network personally, and she suits up as Batgirl, accompanying Nightwing and Tim Drake to track down who is responsible. But with fear consuming the streets of Gotham, Batgirl and Nightwing accidentally get hit with something that reveals their deepest fears…and it involves each other. 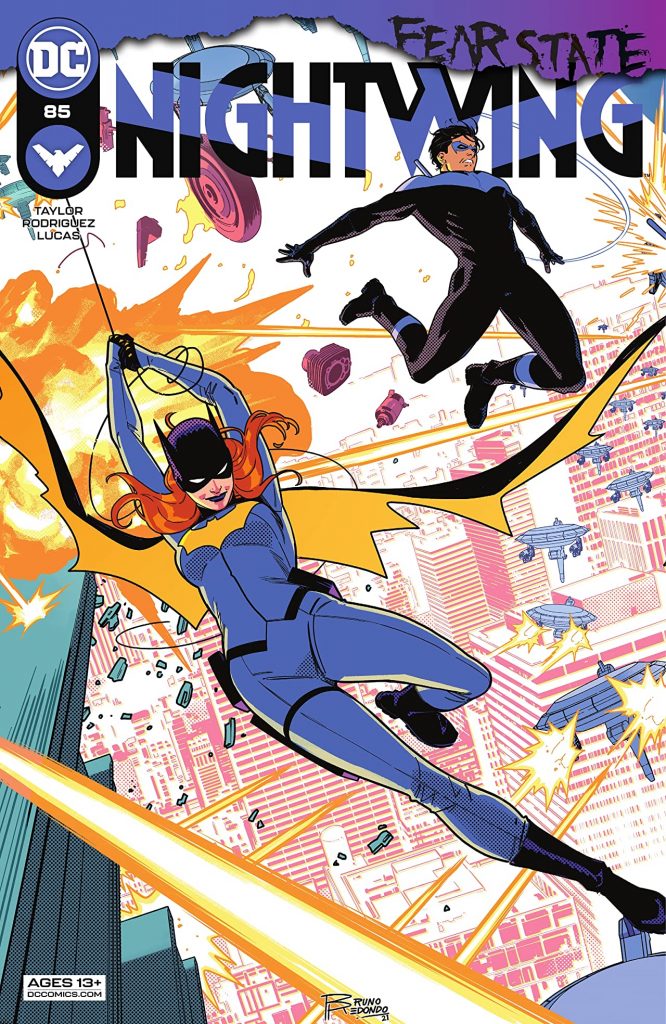 We step into part two of FEAR STATE with a change of narration.

Barbara Gordon has featured prominently in this series since Tom Taylor took over and NIGHTWING #85 is told from her point of view, albeit as she fights alongside Dick Grayson.

With the Oracle network compromised by a villain named Seer, Gordon and Grayson race to take down the system before it does any more damage. Along the way, we get some of the priceless banter you’d expect from Dick and Babs plus a brief flashback to their younger days as a bonus.

One Easter egg I noticed in the flashback is that Grayson had a Superman action figure in his room at Wayne Manor? Ingrate…

Quick heads up, one subplot gets a cliffhanger that we’re told will be resolved in BATMAN #116. So if you’re a completist add that one to your list/subscriptions.

Robbi Rodriguez again does the art for this story arc with Adriano Lucas the colors. The panels where Batgirl and Nightwing are racing to their destination are a real highlight, with one red-tinted panel looking a bit like the opening to the JUSTICE LEAGUE animated series. Happy to say the fight scenes were easier to follow than in the previous issue.

If I did have a minor, unimportant critique it’s that Rodriguez draws multiple characters with similar-shaped eyes. No biggie, Greg Capullo does the same thing with eyes and lips. Doesn’t diminish their glory.

NIGHTWING #85 is one of the better crossovers featuring the character, easily surpassing YEAR OF THE VILLAIN or NIGHT OF THE MONSTER MEN. It falls a bit into the filler category but throws in enough action and surprises to be worth it. – James Armstrong