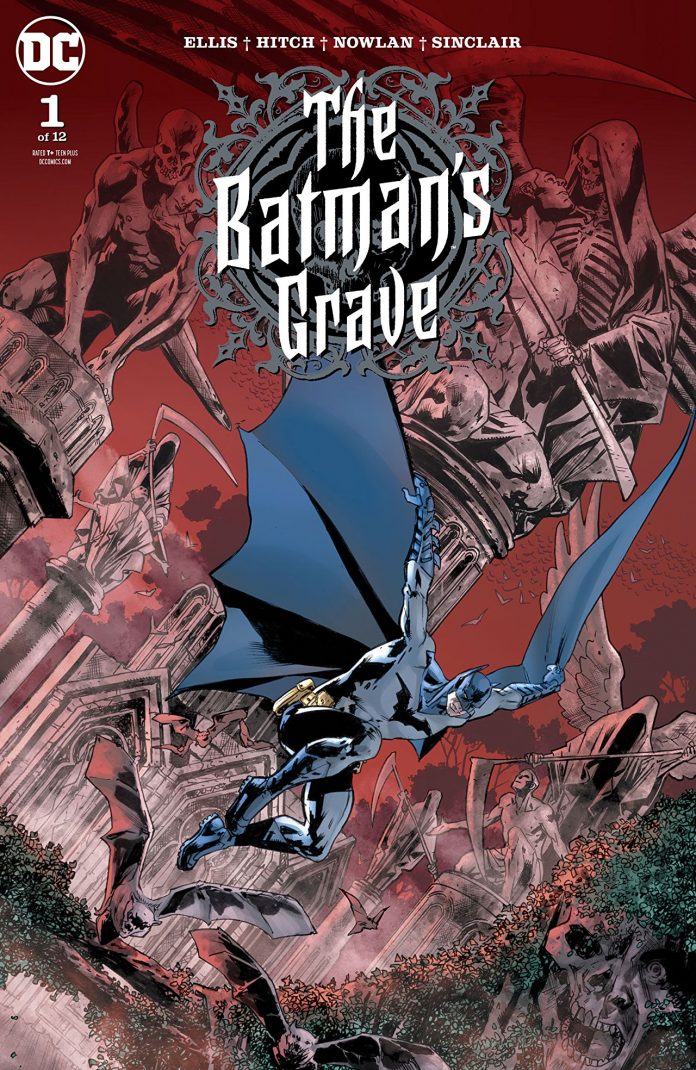 SYNOPSIS: The World’s Greatest Detective must try to inhabit the mind of a murder victim to solve a case—without filling the empty grave next to those of his parents. Can Batman imagine the life of a corpse with a half-eaten face without dying himself?  Warren Ellis and Bryan Hitch, one of the most legendary creative partnerships of the modern age, reunite in this maxiseries about life, death and the questions most are too afraid to ask.

In two sentences, writer Warren Ellis lets the reader into Bruce Wayne’s mindset and the theme of this series. It’s a tragic point of view, surely. However, it’s one that speaks to the inherent heroism of The Batman and the journey we are about to take.

For those unfamiliar, Ellis, alongside artist Bryan Hitch, made a big splash on the comics scene with the release of The Authority back in 1999, a super-team book that brought a sense of widescreen adventure to the page. Ellis has dabbled with the Caped Crusader before, having written issues of Legends of The Dark Knight and contributing a black and white back up to Batman: Gotham Knights. Hitch, a fan of the art of Bat-Legends Jim Aparo and Don Newton, has certainly drawn the Dark Knight Detective on stints in the JLA and Justice League, but this is the first major time Batman gets the spotlight.

Ellis establishes the mood, opening on a solemn Alfred, tending to the Wayne’s graves. Continuity has been shuffled around so often, that it’s easy to accept the tombstones as they are presented, including the fact that Bruce’s is laying in wait for him someday. Hitch’s art makes the reader feel Alfred’s heavy heart as he brushes his hand against Bruce’s name. Right out the gate, I was struck by a melancholy that only got deeper as the story progressed.

Before one gets too mired in sadness, the story cuts to a magnificent two-page spread of The Batman, watching over his city. It’s the kind of shot you would expect from Hitch, cinematic and grand. Colorist Alex Sinclair makes it come to life, as Gotham glows underneath the feet of her guardian. Like New York, Gotham is a city that doesn’t sleep.

Diving down to the street level, we find Officer Nguyen, out for a movie with his husband and child. This story feels very much of the NOW, with movie posters of very familiar-looking killer clowns in the background. As the family cuts through an alleyway, leaving the security of the bright neon lights, Sinclair steps up the fog and darkness as a threat emerges. You no longer feel that you’re in a safe place.

That perception gets slightly undercut by the dialogue. The muggers start off feeling ominous as they know who their target is and where he keeps his firearm, but as they repeatedly use the word “scorn” it seems ham-fisted, like they are trying to come off as The Mutant Gang in The Dark Knight Returns. Later in the story, the word is graffitied on a wall and also found in a journal, so perhaps they are one of Gotham’s numerous themed gangs and not just criminals who like their word-of-the-day calendar.

Before the tragedy of Thomas and Martha Wayne can repeat, The Batman swoops in to save the day. He is seen as tall and powerful under Hitch’s pencil, with blows that feel heavy and crushing as they land. In fact, one well-placed kick sends a tooth flying! It’s easy to see the Aparo/Newton influence as Batman swings away, politely asking the officer to call for an ambulance as he wishes the couple a good evening. Had the word “citizen” escaped Batman’s mouth as he left, Ellis would have captured an Adam West-like vibe!

Speeding through the thoroughfares of the city, Hitch’s take on the Batmobile seems inspired by recent iterations, calling to mind the rides depicted in Batman v. Superman and Batman: Arkham Knight. With huge wings serving as a spoiler, it feels like the quickest armored assault vehicle you’ve ever seen screaming out of hell. I can practically hear the engine roar!

Batman’s ready to call it a night, but after a wry comment from Alfred about alleyways and cinemas practically being the Dark Knight’s calling card, word of a 9-1-1 call comes in that catches the Caped Crusader’s attention.

An unexplained death brings The Batman to a dilapidated part of town, one where the city lights don’t shine as brightly. It feels as if we’re back in that dangerous, dark alley again. Once inside, Batman stoically towers over its residents as he questions what transpired. Ellis’ dialogue feels more natural here, with the residents creating an image of what their neighbor, Vince, was like. Their body language is more relaxed compared to that of Batman, whose posture reflects a police officer’s authority.

I really like how this scene comes off. Seeing Batman just regularly talk to people instead of violently interrogating someone feels like something we don’t see a lot of, bringing a freshness to the scene. I wouldn’t describe him as friendly since there is an aloofness that Batman exudes, but I also get the sense that he cares about this potential victim as he reassures everyone. Vince is now in his jurisdiction and Officer Batman is on the case.

Batman makes entry and finds a clean, yet run-down room. As he runs his emulator scan, I appreciated how his detective’s mind was already making observations in the moment. Despite using modern tech at the same time, it feels very old school. Batman then notifies Gordon of the decedent. The terms used feel very procedural and add an air of authenticity, though I’ve yet to meet a medic who uses the term “bus” instead of “ambulance”. The Dark Knight identifies himself as “Officer Franciscus”, which is possibly an allusion to Saint Francis, a man who abandoned his wealth to help the poor.

Returning to the sanctuary of the cave, Hitch shines once again with a two-page spread that depicts the layout of the Batcave. As colored by Sinclair, cool blues and soft greens dominate, recalling his work on Jim Lee’s Hush arc. It makes the cave feel exactly as it should. Bats and various modes of transportation abound and while there are lots of details packed in, you may be disappointed by the lack of giant penny and T-Rex.

The melancholy I mentioned earlier rears its head again as Bruce finds a slightly inebriated Alfred upstairs. I can’t for the life of me recall a time I’ve seen the dutiful butler kicking his sock-adorned feet up and pounding a bottle of scotch, whose brand I had to wonder if it was an homage to the time Ellis wrote James Bond.

The conversation that ensues highlights and brings out the humanity in not just Bruce Wayne, but Alfred, too. You can feel Alfred’s concern for the man who is basically his son emanate out of every crease in his wrinkle-lined face. He doesn’t look any older than how he’s classically depicted, but there is a weariness that comes out in the dialogue, stemming from too many nights worrying about Bruce finally joining his parents. There’s a parallel with Christopher Nolan’s Alfred here as Ellis’ Alfred has a belief that Bruce Wayne and his resources will have more of an impact than Batman ever could. He even goes so far as to equate it to class warfare. Bruce can’t (or won’t) see it and instead turns his mind to bring justice to another poor victim.

What follows is a brilliant sequence as Ellis and Hitch delve deep into Bruce’s deductive process as the crime scene emulator panel by panel enables Bruce to see himself as the victim, Vincent William Stannik. His identification goes so far that his self-image becomes that of Stannik himself as he works out the chain of events, with a brutal realization snapping him back to the visage of Bruce Wayne. I love movies deeply, but this scene is something the medium of comics can pull off masterfully, letting the art and dialogue use their unique method of storytelling in a way that would make a major studio nervous for their big-budget action tent pole release if it tried to do the same thing. My mind flashed to Matt Reeve’s upcoming film, wondering how he’s going to bring this type of atmosphere to the silver screen.

With the mystery unraveled in Bruce’s mind, The Batman races the burgeoning daylight to the scene of the crime and finds…well, something that raises more questions than answers.

This is a finely crafted detective story through and through with some great characterizations of Batman and Alfred. Not being tied to any event or crossover leaves Ellis and Hitch free to tell their story how they want it and at the pace it needs to draw the reader in. The approach feels grounded, with the art of Hitch and his inker, Kevin Nolan, feeling epic and intimate at the same time.

Typically, Nolan’s inking isn’t always my cup of tea, but he complements Hitch’s lines so well here, with a detail that brings depth to the art. When Hitch gets close up on a character’s face, Nolan helps bring out the definition in their humanity. The decay brought to Victor’s corpse lets you imagine the pungent smell his neighbors reported with clarity.

The Batman’s Grave is a low-key tale brought to procedural life by two long-time collaborators at the top of their game. As the next eleven issues play out, I can’t wait to see what they explore and where they take us. Will Alfred’s fears come to pass? Is the Batman a living grave for Bruce Wayne? Is there more to the murder of Victor Stannik or will the series focus on other crimes and criminals? Why does the word “scorn” show up so often? Based on the strength of this issue, it should definitely be on your pull list and I can’t wait for next month to see what answers we may or may not get. This is a Batman tale done right. – Javier E. Trujillo