You Are Here Home Comicbook Movie ARROWVERSE Exclusive: Creator Marc Guggenheim Details The Difference Between Live Action And Animation
Marc Guggenheim is one of the pioneers responsible for the Arrowverse and he recently opened up about the shows for us exclusively ahead of his latest Tales of Arcadia release on Netflix, Wizards. Read on!

Executive producer Marc Guggenheim (Arrow, Legends of Tomorrow) is gearing up to release his latest project with director Guillermo del Toro (The Shape of Water, The Book of Truth) in the Tales of Arcadia series, Wizards. The show is headed to Netflix from Dreamworks in just ten days.

To help promote the launch of the upcoming series, Guggenheim recently spoke with us here at Comic Book Movie exclusively about the animation. Since much of his experience is from his involvement from the shows in the Arrowverse, we were curious about the differences in live-action and animated filmmaking.

We learned quite a bit and chatted about how the Arrowverse informs his work on animated projects, of which that universe has two — Vixen and The Ray. As always, if you’re interested in hearing the audio component of this interview, click play on the podcast player below. We chat about the Arrowverse starting around 07:50.

Literary Joe: Do you feel like you have more freedom when it comes to storytelling with an animated medium versus live-action?

Marc Guggenheim: You know, the thing I always tell people is no matter what medium it is, there’s always going to be someone who is telling you it can’t be produced; that you can’t afford to produce it.

I will say that I think with animation, the problems tend to be more budgetary than logistical. Because, theoretically, in animation, whatever you can pay for, you can produce. Whereas, in live-action, your problems are both budgetary and logistical.

I’ll give you an example. You could have a huge action sequence set outside, and you’re shooting it over the course of several days. Well, what happens if it rains on one day? Suddenly, one out of three shooting days doesn’t fit in continuity with the other two. That’s not a problem you run into with animation.

Similarly, with live-action, you’ve got to be able to get all of your actors in a particular place at a particular time. That’s not a concern with animation because you could have one actor doing voicework in Brazil and several other actors and people on the same team in New York.

So, animation just allows you a little bit more flexibility in terms of not having to worry about logistics. But you still have to worry about money.

Literary Joe: That makes a lot of sense. I’m curious, how do you feel like your experience with DCTV has helped influence the creative fingerprint you’ve left on the Tales of Arcadia series?

Marc Guggenheim: That’s a good question! I think, because of my involvement with the Arrowverse, even though I haven’t always been involved with every single show, I basically developed my personal philosophy for how to build out a universe, but also how to launch a spin-off series.

I’m a very big believer that a spin-off should stand on its own feet. It should have its own identity as a show. The Arrowverse shows really have always been at their best when each show leans into what makes it different from the other four to five to six, depending on how many there are on the air at the time. And I think that has informed my thinking on the Tales of Arcadia Trilogy. 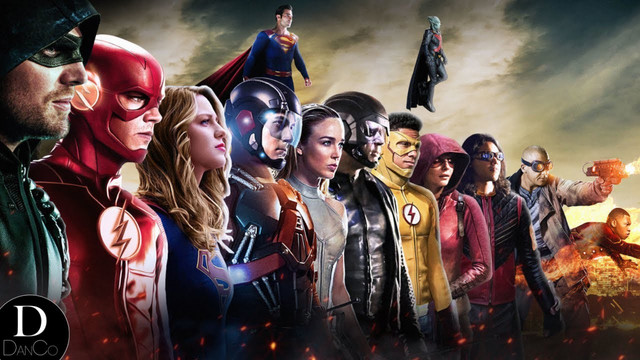 *This interview has been edited for clarity.*

Check out the trailer for his upcoming project with Guillermo del Toro (Pan’s Labyrinth), Tales of Arcadia: Wizards, and be sure to share your thoughts in the usual spot!

Join our favorite supernatural heroes on a time-bending adventure to medieval Camelot. The magic continues the final chapter of the Tales of Arcadia saga, Wizards.