Captain Marvel is now available on all formats and to make the home entertainment release of the Marvel Studios blockbuster, we recently caught up with stars Mckenna Grace and Akira Akbar.

Mckenna has a long list of acting credits to her name, including Designated Survivor and Chilling Adventures of Sabrina. In Captain Marvel, she plays the young Carol Danvers during a very memorable sequence which pays off in a big way during the final act. Akira is newer to Hollywood but delivered a scene stealing performance as Monica Rambeau opposite Brie Larson.

In this interview, we discuss everything from their favourite moments working on the Marvel Studios movie, what they hope to see from their characters moving forward, making friends with Goose, and the importance of female superheroes to young girls in the often male dominated genre.

It’s a great read so check out the interview below and a big thank you to Mckenna and Akira for taking the time to talk to us!

I wanted to start by asking you both how you felt to be cast in Marvel’s first female-led superhero movie?

Akira: It was very surreal and amazing and I just started researching as soon as I got the call.

Mckenna: It was incredible and my dad and I both completely geeked out because we’re huge fans of the Marvel Cinematic Universe but it was just…I can’t even describe it! [Laughs]

McKenna, your scenes end up being extremely important to Carol’s overall journey so what was it like for you to see those in the finished film as Captain Marvel keeps standing up against the odds?

Mckenna: Well, when I saw that part I was like, ‘Omigosh, wait, that’s so crazy!’ I was freaking out. My dad and I were super excited and so was my mom. We couldn’t believe it.

Did you both feel a lot of pressure playing your characters knowing that they grow up to be such inspiring, powerful superheroes?

Akira: Honestly, it didn’t really put pressure on me, I was just very excited to know that my character grows up and gets to become a superhero! So, I was like, ‘Maybe one day, I’ll get to play her!’ It was just amazing for me.

Mckenna: A little bit for me because I felt like I had the responsibility of playing this amazing character and showing how resilient and incredible Captain Marvel is. I realised it was such an important part so I tried my best and I hoped for the best! [Laughs]

Akira, if another actress plays an adult Monica somewhere down the line, what advice would you give them?

Akira: I would tell them that Monica is very loving and loves her family and she’s very curious. She wants to know everything that’s happening in her mom and her aunt’s life.

And what was it like for you to be in those scenes with everyone from Brie Larson to Samuel L. Jackson, Ben Mendohlson, and perhaps most importantly, Goose?

Akira: It was amazing, especially because Samuel L. Jackson, Ben Mendohlson, and everyone are such legends themselves and I would love to work with them again.

McKenna, can you take us behind the scenes of that racing sequence with young Carol and what that was like to shoot?

Mckenna: I had been shooting in, I think it might have been Canada at the time, but I had to fly back to LA to learn how to go-kart. They taught me how and that was really fun and that day, it was just incredible, because they had the whole stunt with the car flipping. Watching that was crazy. Doing the whole thing was amazing and incredible and surreal and just [Laughs] awesome!

Did you get the opportunity to talk to Brie Larson before shooting your scenes at all and, if not, have you been able to catch up with her since? 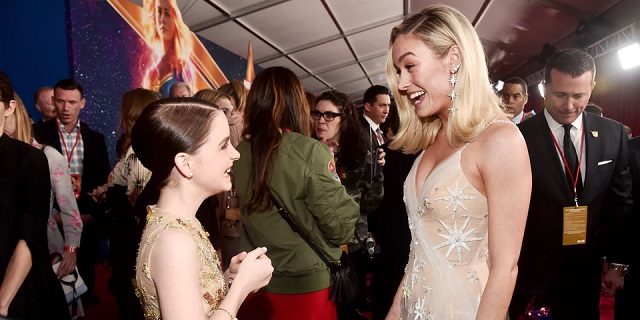 Mckenna: I did not get to talk to her before about Captain Marvel and stuff but I was not given a script so I didn’t know too much about her besides everything I had Wikipedia’d! All I knew from the sides that I had been given was that Captain Marvel was just a total, incredible, rebel female protagonist. I just knew that she was incredible and I could not wait to watch the movie and one day I ran into Brie Larson in hair and makeup which was really incredible, getting to meet her.

What did you guys think about Captain Marvel’s new look in Avengers: Endgame?

Akira: To be totally honest, I haven’t watched Avengers: Endgame because I’ve been so busy with working a lot and school but right when I get to the movies, that’s the first one I’m going to see! [Laughs]

Mckenna: I thought it looked really cool and was awesome. I can’t describe it because Akira has not yet seen the movie but it was really awesome!

How challenging is it having to keep so many secrets while working on a movie like Captain Marvel?

Akira: Well, I wanted to tell everybody like all my friends and everything but I had to keep it a secret and it was so hard because it was such a big thing that happened to me and I wanted people to know!

Mckenna: It was pretty hard as Akira said but the only person I was able to tell was my dad and we completely geeked out together but I tell my friends a lot of stuff and I could not tell them so I was really sad about that.

We you both comic book fans before being cast in the movie?

Akira: Well, I’d seen a couple of Marvel movies like Black Panther and Infinity War and I actually really like them so I would go to the library and look for some comic books. It’s so hard to find them because I think they’re very rare but I would love to pick up more comic books.

Mckenna: I really like graphic novels but I get through them so fast, my mom doesn’t let me get them that often. I’ve always wanted to start collecting comic books but they’re super hard to find. I am a huge fan of Marvel as I said before so I did know a lot about the universe! [Laughs]

If the Captain Marvel sequel is set in the past, there’s a good chance we’ll see much more of Monica so what would you, Akira, like to see from your character moving forward if that does indeed happen?

Akira: Well, I’ve heard that Monica becomes a superhero when she gets older and I would love to play her. If not, then I just want to see her powers and everything she becomes.

What about you Mckenna if you get to play Carol again in flashbacks?

Mckenna: I’d like to do anything in this movie franchise if there is another. I think it would be incredible if I got to come back but that’s if there’s another!

How important is it for you as young women to have strong role models in film like Captain Marvel and, in many ways, to have played role models yourselves? 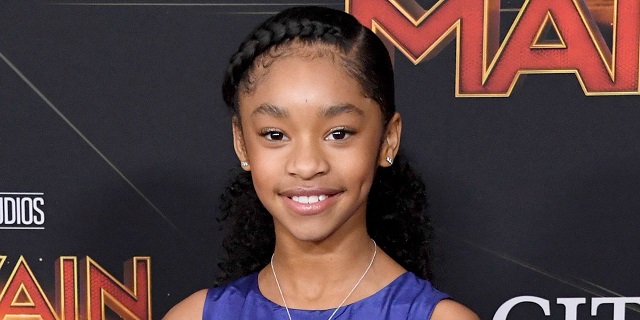 Akira: It’s very inspiring because as we know, and other people now know, they can be whoever they want no matter where they are or who they are and just work hard.

Mckenna: Exactly. Whenever I go to watch this or see any of the posters or just think about how awesome Capain Marvel is, I think about this awesome female superhero. Whenever you think of superheroes, you normally think of a strong male but now, for me, this is just incredible. It’s someone I can look up to and say, ‘This is awesome. I can be like Captain Marvel.’ I hope that’s what other people take away from the movie as well.

What were some of your favourite moments working on the movie?

Akira: At the wrap party, one of the crew got married and they had the wrap party as their reception. Me and Lashana Lynch did a dance duo and it was so much fun!

Mckenna: I was on set for a short period of time but just learning how to go-kart and meeting the people who worked on this and just getting to see everything that’s put into these movies was incredible for me.

If there were any other heroes in the Marvel Cinematic Universe you could play, who would you choose?

Akira: Can it be like a guy superhero? [Laughs]

Mckenna: It’s kind of hard to pick because there’s so many. Dang you, why would you ask this? This is making us work really hard! [Laughs] Well, when I’m an adult, I think it would be really cool to be able to play Captain Marvel! I think that’s just incredible. I would like to ask…does Monica Rambeau count? [Laughs]

Absolutely! Do you have any favourite scenes from the movie now you’ve seen it?

Akira: Well, when Monica was standing outside with her mom and Captain Marvel and Carol just ran off into space, that was pretty cool.

Mckenna: I liked when Captain Marvel was flying through space and she was punching the spaceships and they were all exploding. And the bad guy was like, ‘Wait, what’s going on?’ and she flew up in front of them and they were just standing there staring face to face with Captain Marvel with just a thin layer of glass between them and then they retreated. That was a really cool part of the movie and that was really important for Captain Marvel’s character development to see how cool she is and how strong and powerful she is.

What would you say to girls your age or even younger who are looking to follow in your footsteps in Hollywood?

Akira: I would say work hard and if you really want it, go for it. If it’s a dream that you want, then achieve it and don’t give up.

Mckenna: I also really like that and definitely, yes, work hard as that’s a very important thing. No matter what happens just keep working hard because you can do it. You can achieve your dreams, follow your heart, and reach for the stars!

Have either of you had chance to meet Goose at all and did you, Akira, get to work with him on set as I know he was CG for a lot of Captain Marvel?

Akira: I did get to work with him in the movie and it was so funny.

Mckenna: Fun fact, we just went to see him right now. We just came back from playing with him to come and do this interview. That’s so funny. [Laughs]

Finally, what would you both like to say to your fans whether they’ve followed your work for a while or first discovered you in Captain Marvel?

Mckenna: Follow your dreams, thank you so much for watching, and just stay incredible. Also, I know this is kind of random but it’s okay to be different. Difference is the one thing we all have in common.