You Are Here Home Comicbook Movie DC’S LEGENDS OF TOMORROW Exclusive: Executive Producer Marc Guggenheim On The Show’s Formula
We spoke exclusively with Marc Guggenheim about DC’s Legends of Tomorrow while promoting the upcoming Netflix and Dreamworks series, Tales of Arcadia: Wizards. Check out what he had to say yourself below!

Of all of the DC TV shows that have found their way into the Arrowverse, DC’s Legends of Tomorrow is, without a doubt, one of the wackiest. Taking the most risks of all of the franchises, the series tackles some silly storylines that could fit into the tone of Flash but are far too lighthearted for the likes of Arrow. Like Beebo.

What began as a single series emerging from the shadow left by Smallville, Arrow eventually paved the way for Flash, Supergirl, Constantine, Black Lightning, and more to help fill out the shared universe. When one of those shows has a roster that starts overflowing, there’s only one team to call — the Legends.

Throughout its continuity, the Arrowverse has helped heroes like The Atom (Brandon Routh), Constantine (Matt Ryan), White Canary (Katie Lotz), Kid Flash (Keiynan Lonsdale), Captain Cold (Wentworth Miller), and countless more make their way into the team-up franchise. When we recently chatted with series creator Marc Guggenheim (Tales of Arcadia: Wizards), we asked what the process of adding new team members to the roster is like.

As always, if you’re interested in hearing the audio component of this interview, click play on the podcast player below. We chat about DC’s Legends of Tomorrow around 11:00.

Literary Joe: Legends of Tomorrow leans into what makes it crazy, and I think that’s one of the things that lead to its success. I’m curious if the formula for Legends is any different than the rest of the shows in the shared universe?

Marc Guggenheim: I would say it has evolved to the point where it probably has the most unique elements. It’s funny; I don’t really feel like each show has a formula, necessarily. I think that each show has contributed to the ones that have come before it, especially in the early days.

I’ll give you an example. Arrow’s strengths and weaknesses informed the thinking when Flash was being built. Because legends is the only ensemble superhero team of the various Arrow shows, its always going to have its own thing.

There’s just Supergirl. We may call it “Team Arrow” or “Team Flash,” but at the end of the day, those teams are centered around one singular character. Legends is unique amongst those various shows so far, and it was always a different kind of franchise. It was a team franchise, as opposed to a single lead franchise. Does that make sense? 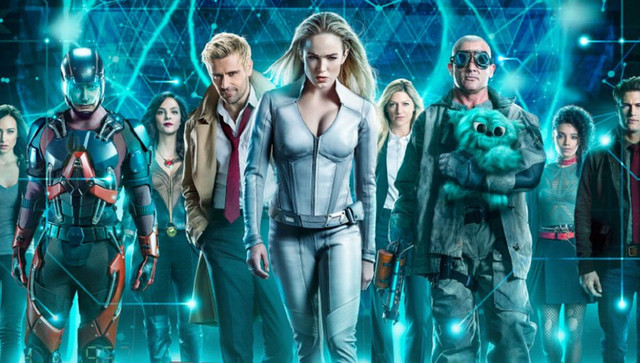 Literary Joe: Of course. And I think the best thing about it being a team franchise is that you can bring in anybody from any other series. I was curious if there has been anybody you’ve tried adding to the Legends team that didn’t end up making the cut?

Marc Guggenheim: Hmm. You know, I think over the years, we had various conversations about who to bring in at any given moment in time. But they didn’t make the cut, not necessarily because they didn’t work creatively.

I can’t think of anybody we’ve added to the ensemble that didn’t work creatively. But I can think of plenty of instances where we had talked about bringing in a character, and then deciding for any number of reasons not to do it.

In some cases, that reason was that the actor was unavailable. (Laughs) But I can’t think of a situation where it didn’t creatively work.

*This interview has been edited for clarity.*

What do you think of Guggenheim’s comments regarding DC’s Legends of Tomorrow? What’s your favorite season of the show?

Check out the trailer for his upcoming project with Guillermo del Toro (Pan’s Labyrinth), Tales of Arcadia: Wizards, and be sure to share your thoughts in the usual spot!

Join our favorite supernatural heroes on a time-bending adventure to medieval Camelot. The magic continues the final chapter of the Tales of Arcadia saga, Wizards.