You Are Here Home Comicbook Movie MARVEL CONTEST OF CHAMPIONS Exclusive Interview With Kabam On The Addition Of Alpha Flight Heroes
Canadian heroes recently got the spotlight in MARVEL Contest of Champions, which of course means that Alpha Flight members were added to the roster. Check out what the team at Kabam had to say about them!

Kabam Games likes to keep things interesting and fresh in their hit mobile brawler MARVEL Contest of Champions by adding new characters to the roster each month. These new fighters often come with fun motion comics to promote their arrival.

The team at Kabam has chosen to shift the spotlight to Canada for the month of July which means that members of Alpha Flight will finally join the roster of champions. Unfortunately, players won’t see the likes of Puck and Snowbird, but there are plans to introduce additional members in the future. For now, the addition of Guardian and Sasquatch will have to appease fans of the team from the great white north.

Kabam Games was nice enough to designate two members of their team to answer some of our questions about MARVEL Contest of Champions. Gabriel Frizzera, the Creative Art Director, and John Phillipson, the Balance Designer (whom we’ve had the pleasure of speaking with in the past) had plenty to share, so check it out for yourself below! 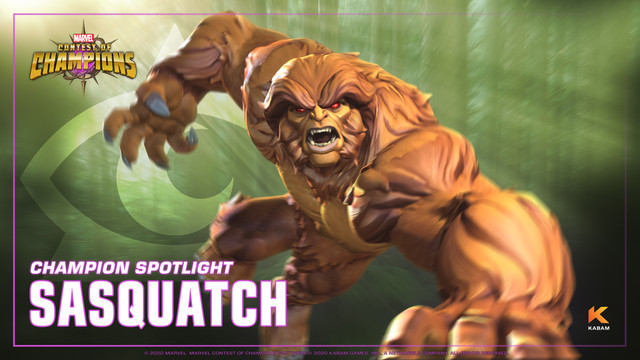 Joe: Sasquatch and Guardian were chosen as the two newest champions, both members of Alpha Flight. How did you pick these two instead of Puck and the other members of the Canadian team?

Gabriel Frizzera: If I could I would have them all at the same time, but we only release two characters a month, so we picked the two we thought would work best for the game meta at this moment. But we do have plans to bring more Alpha Flighters in the future, including my favorite, Snowbird.

Joe: What led to the decision to focus on Canada for the month of July?

Gabriel Frizzera: Our studio is in Vancouver, Canada, and as good Canadians, we had Alpha Flight on our favorite list since day one. So, after a few years celebrating the 4th of July but not Canada Day (which is July 1st), we decided to finally bring Marvel’s mightiest Canadian Super Heroes to The Contest of Champions. 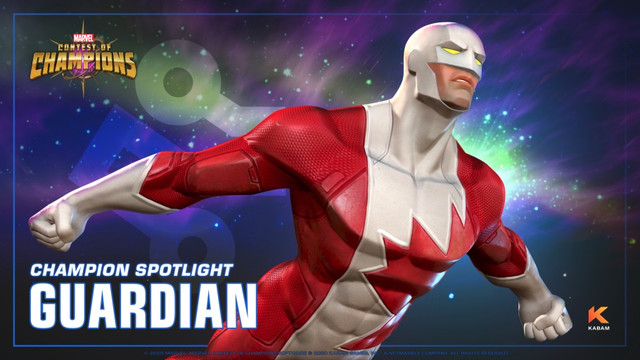 Joe: Are there any moves or anything that sets these two new Champions apart from the current fighters in the game?

John Phillipson: Guardian has got a combination of abilities from some of the strongest The Contest has ever seen to give him a Jack-of-All toolset. He has amazing blocking abilities thanks to the forcefield his suit gives him. He has massive shock damage that burns his opponent’s health bar away in the blink of an eye. Guardian also has a vast set of tools at his disposal to let you control the fight, and deal with any opponent The Contest may bring your way!

Sasquatch is going to be a threatening defender to run into in The Battlerealm. His thick hide and mastery of his powers will make him a massive tank if you don’t bring the right answer. He’s going to stack up a ton of damage resistance and frequently go Unstoppable making it really hard to find a good time for you to trade blows.

He’s no slouch on offense either. His ability to lower the power it costs to throw special attacks will let him pretty much always have the power to play with. Stack tons of ruptures on the opponent with your basic combo then cache them in for some massive damage and the only thing that will be harder to find than Sasquatch in the wild is going to be an opponent that can keep up with him ;).

Joe: Can you tease anything to come for the future of the game?

John Phillipson: We’ve got some exciting reworks coming up soon for both existing versions of Magneto in the game right now. Totally new kits that will pay homage to the original but each will be totally unique as well. You can expect Magento (Marvel NOW!) to have some awesome synergies and maybe a few other abilities to boost his team similar to Mister Fantastic!

What do you guys make of these comments from Kabam? Make sure to share your thoughts in the usual spot!

Sorry, we don’t mean to be sappy, but we hope you have fun exploring The Northern Expeditions. Have a Happy Canada Day! Enjoy some poutine, and of course, Marvel Contest of Champions.
Take a trip with Guardian to uncover the secrets of the North, and track down the ever-elusive Sasquatch! This series of 4 quests will be unlocked one at a time over the course of 4 weeks, and feature no Quest Completion or Exploration rewards, but have plenty of rewards strewn across the paths!
So pick your best team of 3, and start exploring! Enjoy the new format of Expeditions with reduced paths and a new limited-time CANADIAN difficulty, offering some serious challenges for serious rewards, including 6-Star Shards and Tier 5 Class Catalyst Fragments!

Marvel Contest of Champions is now available to download from Google Play and the App Store. Sasquatch and Guardian are available this month.
DISCLAIMER: ComicBookMovie.com is protected under the DMCA (Digital Millenium Copyright Act) and… [MORE]
DISCLAIMER: ComicBookMovie.com is protected from liability under the DMCA (Digital Millenium Copyright Act) and “Safe Harbor” provisions. This post was submitted by a volunteer contributor who has agreed to our Code of Conduct. CBM will disable users who knowingly commit plagiarism, piracy, trademark or copyright infringement. Please contact us for expeditious removal of copyrighted/trademarked content. Learn more about our copyright and trademark policies HERE. [LESS]