You Are Here Home Comicbook Movie STAR WARS: New Details About Colin Trevorrow’s Final Draft And There’s A New Villain And More Big Changes
Yesterday, details about Colin Trevorrow’s plans for Star Wars: Duel of the Fates found their way online and we brought you in-depth recaps of both that and the final act.

Now, though, we have intel from a later draft and there are a number of key changes. Those include catering for the tragic death of Carrie Fisher and a new villain so that Kylo Ren wasn’t a full-blown villain and was instead a more sympathetic character who did ultimately find some redemption.

We’ve decided to focus mostly on the changes here so you should definitely go back and read those previous recaps to fill in some of the gaps by following the links at the top of this post.

Trevorrow and Derek Connolly definitely had some unique ideas for the Skywalker Saga finale and it’s easy to see which ideas J.J. Abrams and Chris Terrio lifted for The Rise of Skywalker.

To check out this latest breakdown, all you guys need to do is click the “View List” button below!

The opening of the movie is very much the same but the Resistance can no longer communicate with the rest of the Galaxy as the First Order has found a way to block their transmissions.

The plan is still to attack the the planet – likely Coruscant – which the villains use as their base but it’s now “the Jedi Spire of Osis” that Rey needs to reach in order to send out a message to the rest of the Galaxy rather than the old Jedi Temple. Kylo Ren, meanwhile, is on a mission to kill Rey so that he can finally fully embrace the Dark Side.

Talking of Rey, she’s created her own double-sided lightsaber which “works like a boomerang.” 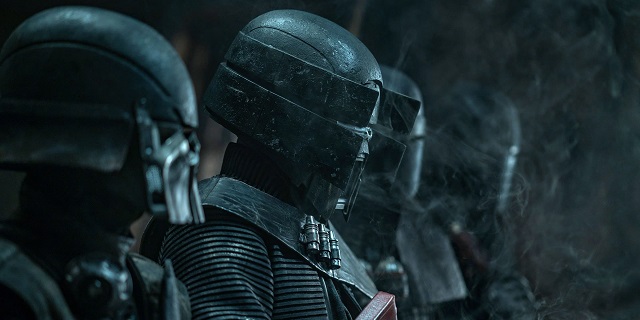 The Knights of Ren board a ship called the “Knife 9” in this version of the movie and the biggest difference is that they also get names and personalities! One of them is revealed to be a woman who, like Darth Maul, is from Dathomir.

With Kylo Ren off on his own mission, she’s in charge and even General Hux reports to her. Why is this important? Well, we’ll get to that later in this post but she doubts Kylo’s ability to usher in a new era of darkness for her and this group. 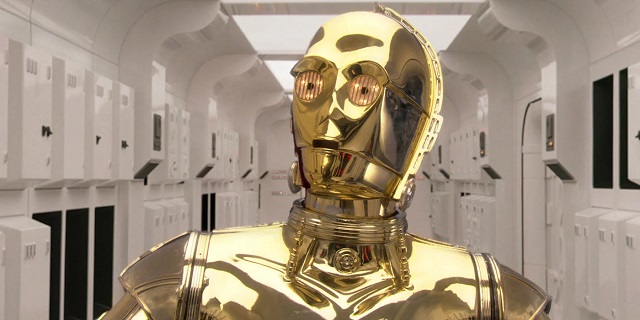 We don’t currently have a lot of details on this point but in Trevorrow’s version of Episode IX, C-3PO would have begun “showing his age.” Whether that means physically or mentally isn’t clear but this subplot being used for comedic effect seems likely and Threepio is always good for some laughs. 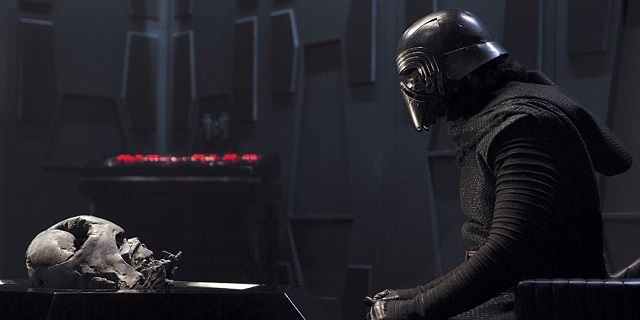 In this version of the movie, Kylo Ren wasn’t going to track down an ancient Sith Master and would have instead just been trying to find that tomb with a weapon which would ensure his victory.

However, rather than a hologram of Emperor Palpatine, it would have been Darth Plagueis and upon watching his message, the Supreme Leader’s face would have once again been left scarred after being hit with red Force lighting due to the fact he isn’t a true Sith/entirely one with the Dark Side.

On the verge of death, Kylo would have been saved by some of the planet’s locals and been moved by their selflessness, a sign that this version would have been on the path to redemption. 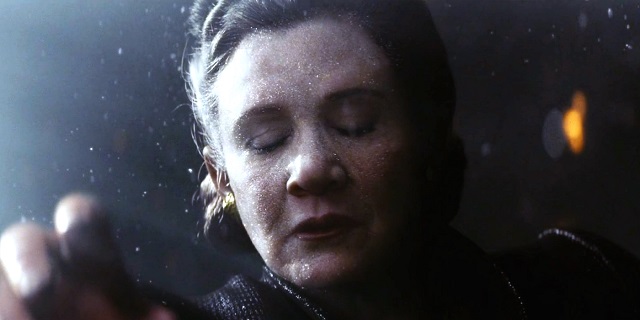 The previous Duel of the Fates draft was turned in a week before Carrie Fisher’s death so some changes obviously had to be made for this version. In this screenplay, the Resistance would have had to flee from the First Order and Leia would have been badly injured in the melee.

She gives Rey one last message before dying and fading into the Force, while an enraged Kylo Ren also feels his mother’s death but is calmed by the aliens who have nursed him back to health. 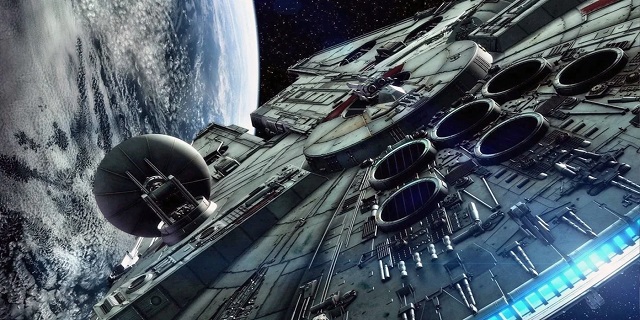 Pursued by the Knights of Ren, Poe Dameron pushes the Millennium Falcon too hard as they try to make their escape and it crashes into a frozen ocean. The ship begins to sink and after Rey uses her lightsaber to save them from drowning, she swims back to retrieve the ancient Jedi texts from inside. 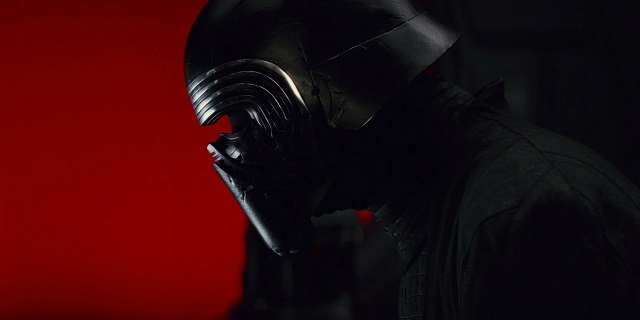 Kylo Ren is in a bad way and seemingly relying on droids to keep him alive after being badly burned and scarred by that Force lightning. Sollony notices that he’s found the Sith Holocron they were looking for and points out that he now needs to sever his connections with both Luke Skywalker and Rey in order to clear his path to the Dark Side.

Donning “a new, more savage” mask which is said to be similar in appearance to Darth Vader, Ren now knows what he must do.

Finn’s subplot remains largely unchanged but he does come to blows with a First Order Stormtrooper whose helmet falls off as they fight. He tells him to remember his past before being taken by the First Order and tells him to get a name and a cause that’s actually worth fighting for.

He later takes the name “Rafe” and joins our heroes during the movie’s final battle.

There’s also a throwback to Rian Johnson introducing those Force Sensitive children at the end of The Last Jedi as a kid is shown with a Rey doll, clearly inspired by the reputation she’s gained in the Galaxy. 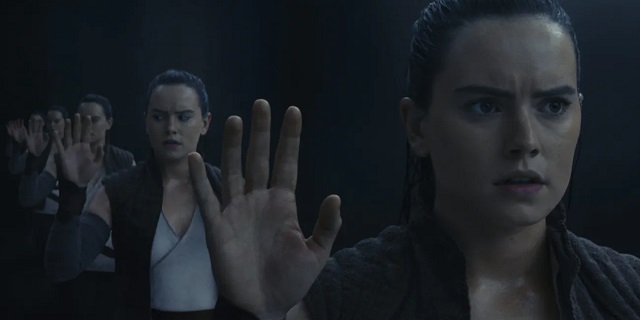 Much of the movie deals with Rey coming to terms with some of her darker impulses and anger about her past, something that comes to a head when she battles the Knights of Ren.

In a moment of pure rage, she kills one of them with purple lightning that explodes from her fingertips. Rey makes Poe and Chewie leave her so she can tackle what comes next alone. 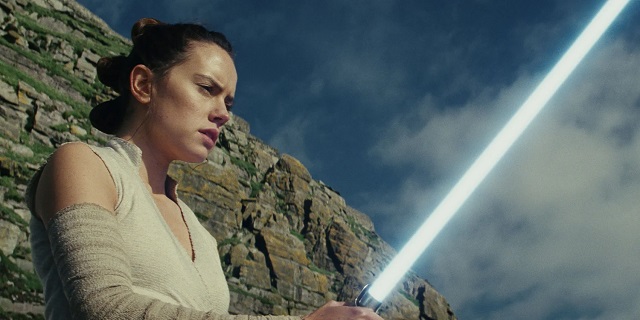 Deciding that she needs to face Kylo Ren and end this, Rey goes full on Jedi (with a robe and everything). Luke warns her that he can feel her anger building and reveals that the Knights of Ren are indeed some of his former students who Supreme Leader Snoke and Kylo Ren managed to turn to the Dark Side.

They’re both heading for the Spire that can be used to send out a message to the Galaxy and it’s there that Kylo seems to believe he will find a weapon capable of ending the Resistance for good. 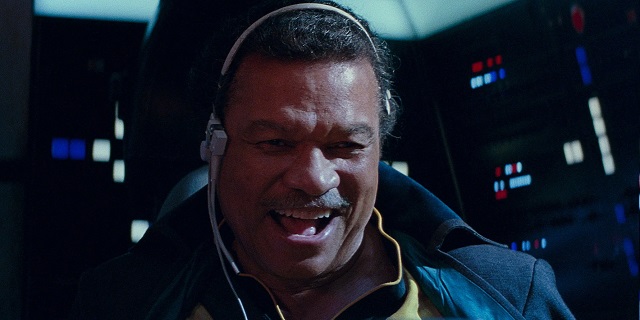 This time, it’s Poe and Chewbacca who track down Lando and it’s revealed that the former captain of the Millennium Falcon once flew with Poe’s mother (something we’ve seen in Marvel’s tie-in comics). Lando refuses to help the Resistance in this draft too and Poe leaves by telling him that when his mom always said about him was right.

Clearly, that strikes a chord with Lando because just as things are looking bleak for the Resistance during the final battle, he returns with thousands of ships in toe. 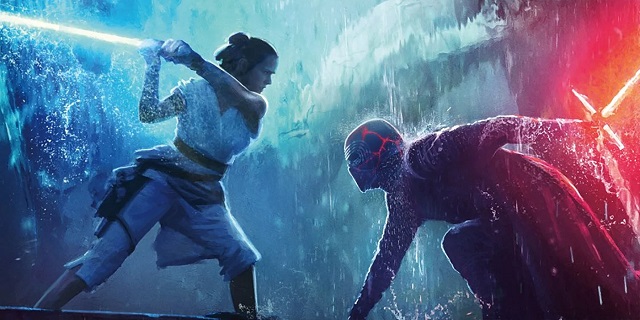 It’s the big Kylo Ren vs. Rey battle but there’s no vampire-like Force powers this time. He is still blamed for murdering her parents but it sounds like it was actually Snoke in this version.

While this is happening, Sollony finally gets her hands on the Sith Holocron and unleashes the “Dark Power” within. Unlike Kylo Ren, it doesn’t hurt her because she’s fully embraced the Dark. 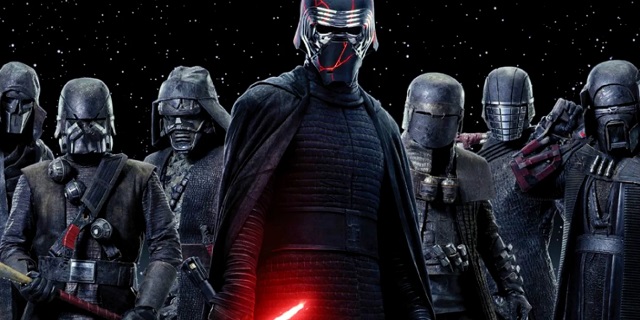 Rey has a chance to kill Kylo but chooses to forgive him and pleads with the Supreme Leader to bring Ben Solo back. Before he can reply, Sollony grabs him and she’s now too powerful for them both.

Kylo saves her from being crushed by rubble and she splits her double-sided lightsaber with him so they can fight this Knight of Ren. Kylo sacrifices himself by taking a blow that was meant for Rey and she unleashes her own Dark Side in a bid to finish the powered up Knight once and for all.

After sharing a look of love, Kylo dies in Rey’s arms but reveals her name: Rey Solana. 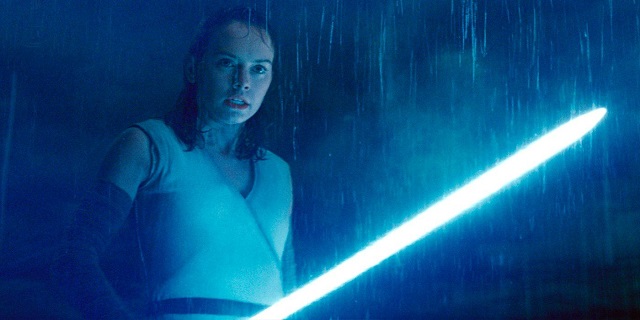 Despite being “almost dead,” Rey climbs the Jedi spire and manages to send a message out to the Galaxy. Revealing her full name, she tells them that hope is not lost.

It’s at this point in the screenplay that Rey is healed by those Force Ghosts we mentioned in our last breakdown and with the Dark Side defeated, the Light again rises. 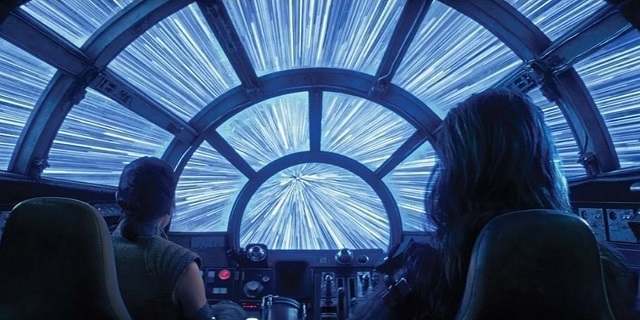 During the closing few minutes, Chewbacca finally gets a medal while everyone wonders whether Rey really has gone. Finn is reading a story to a group of young kids and they ask him that very question; he says that he believes that she’s alive because of the Force (a hint, perhaps, that he’s also Force sensitive).

Lando has a moment with Threepio as R2-D2 comes back online and it’s him who gets to see their memories whereas it was Leia in the earlier version of the screenplay.

Poe and Chewie find a beacon on a planet that may lead them to Rey while we watch the Jedi pull the Millennium Falcon out of the ocean before turning around to teach kids in her own Jedi school.

THE FALCON AND THE WINTER SOLDIER, LOKI, And HAWKEYE All Preparing To Resume Shooting In Atlanta