You Are Here Home Comicbook Movie STAR WARS: THE RISE OF SKYWALKER – Never Before Seen Images Highlight Key Moments And Deleted Scenes
Star Wars: The Rise of Skywalker was a divisive movie which now appears to have mostly been forgotten about. Then again, it didn’t really make the biggest of impacts at the box office as it took a long time for the “Skywalker Saga” finale to limp past the $1 billion mark worldwide.

Now, some brand new official images from J.J. Abrams’ Episode IX have been released, and they offer a better look a number of key moments, including Kylo Ren’s confrontation with Rey, the Resistance heroes heading into action, and characters like Rey, Rose Tico, and Zorii Bliss.

There are even some shots which appear to reveal sequences that failed to make the final cut!

With any luck, we’ll see those on the planned Blu-ray release this April, but in the meantime, all you guys need to do is click the “Next” button below to look through this gallery of stills. 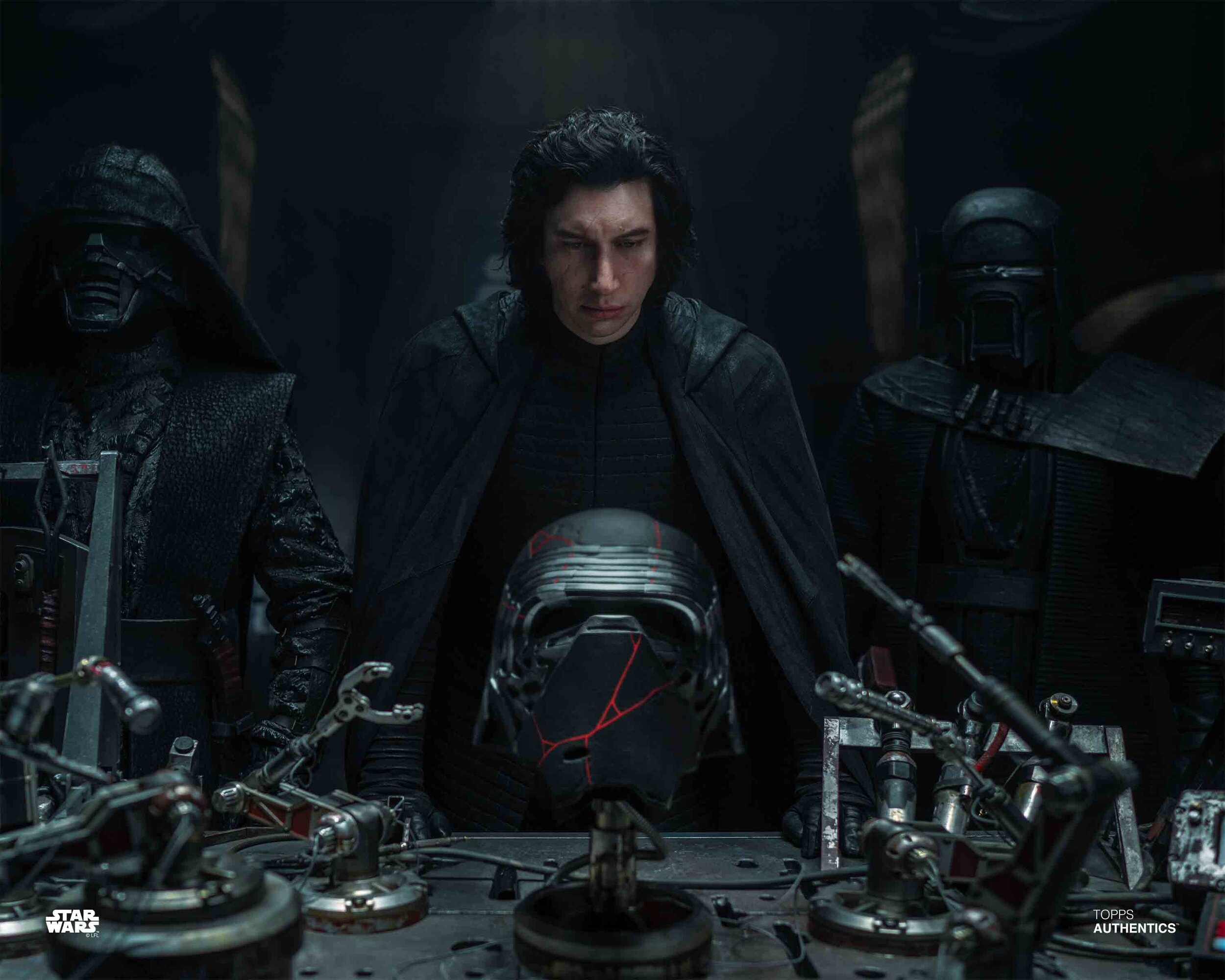 Kylo Ren’s relationship with the Knights of Ren wasn’t touched on in the movie (at all), but a new tie-in comic book series is delving into his first meeting with the group and how the young Ben Solo ended up becoming a member.

As for that repaired helmet, it feels like that may have been J.J. Abrams’ response to Rian Johnson destroying it in The Last Jedi as it surely would have been easier to create a new one! 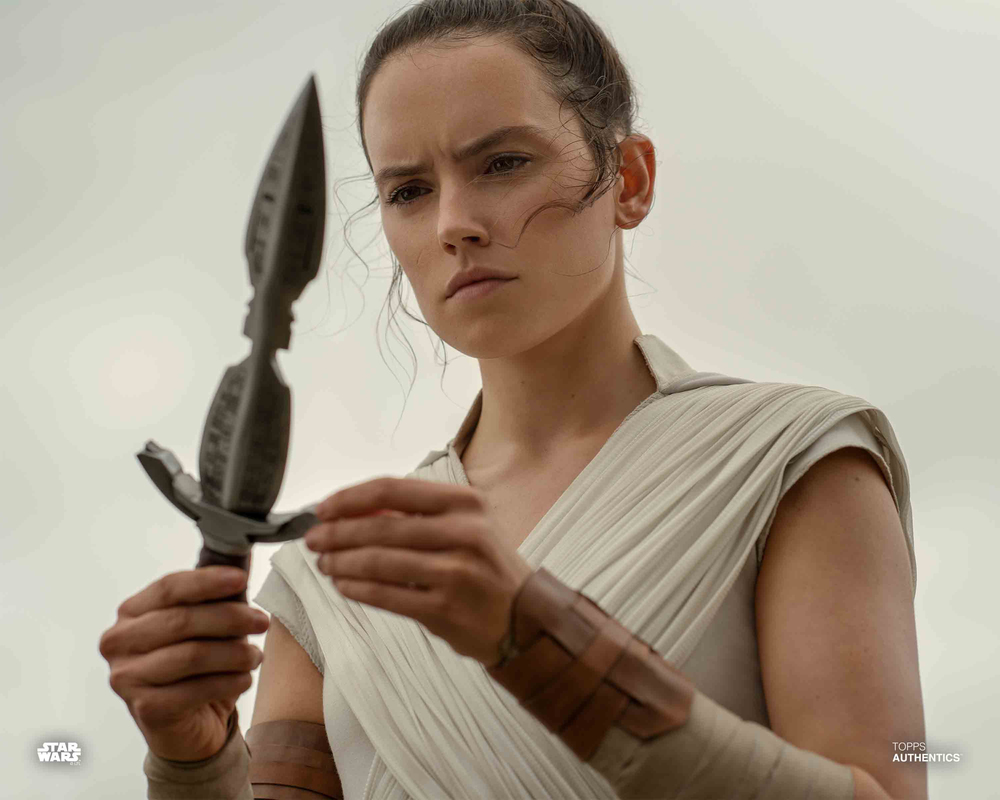 Rey takes a closer look at that Sith blade which, bizarrely, somehow knew how to direct her to the exact point of the Death Star II she needed to head to in order to find the Wayfinder.

That’s something which desperately needed to be elaborated on in the movie, so we now just have to hope that some sort of tie-in novel or comic book elaborates on their history. 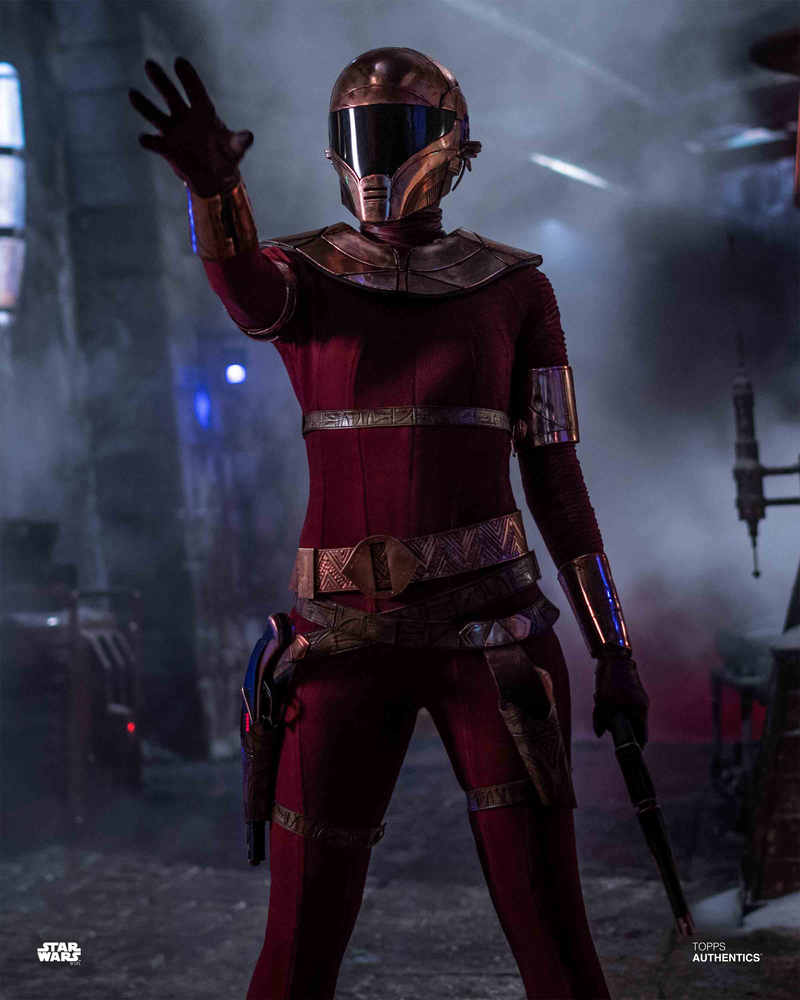 This is our best look yet at Zorii Bliss’ costume outside of the movie itself, and it’s definitely interesting to see what a unique addition to the Star Wars Universe she is from a visual standpoint.

Beyond that, Zorii didn’t really have much to do and seemed to only be in The Rise of Skywalker in order to remind fans that Poe Dameron is straight (and not interested in Finn). 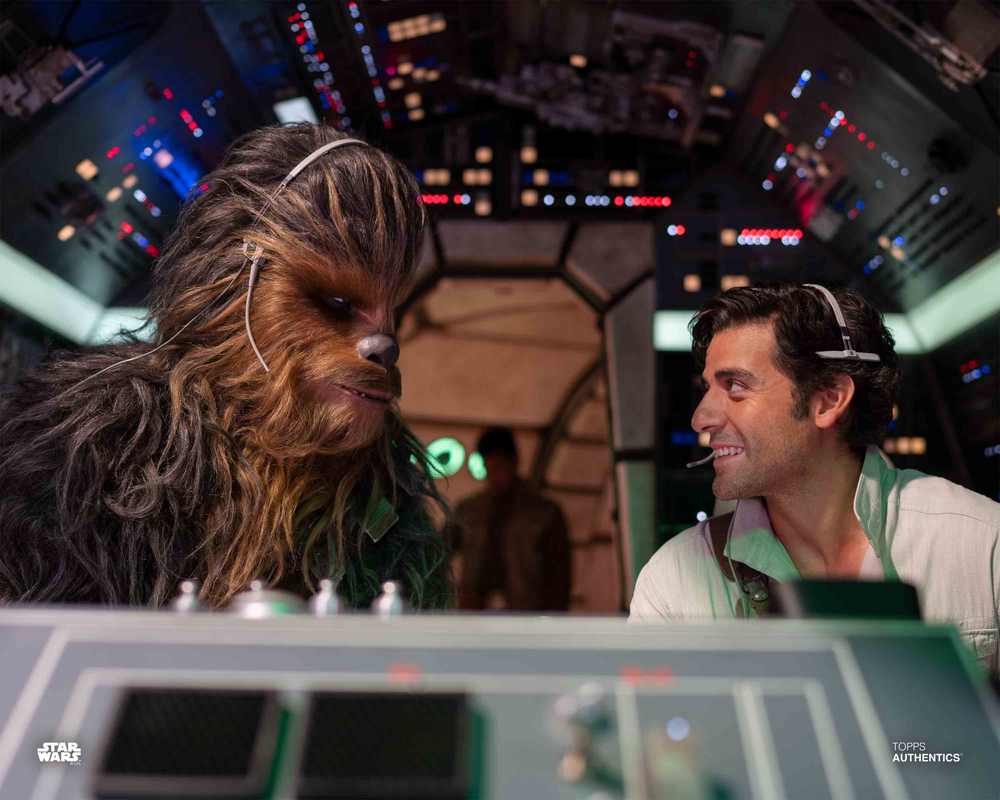 It was awesome to see Poe take charge of the Millennium Falcon alongside Chewbacca, and it’s a shame we didn’t get to spend even more time with the Resistance her in the cockpit.

Moving forward, he’s presumably going to be the ship’s main pilot…well, when Rey isn’t around! This confrontation between Rey and Kylo Ren was awesome, and behind the scenes photos have revealed that this set was made up both of Kijimi and the villain’s Star Destroyer.

As a result, it was just camera trickery which was being used rather than special effects. 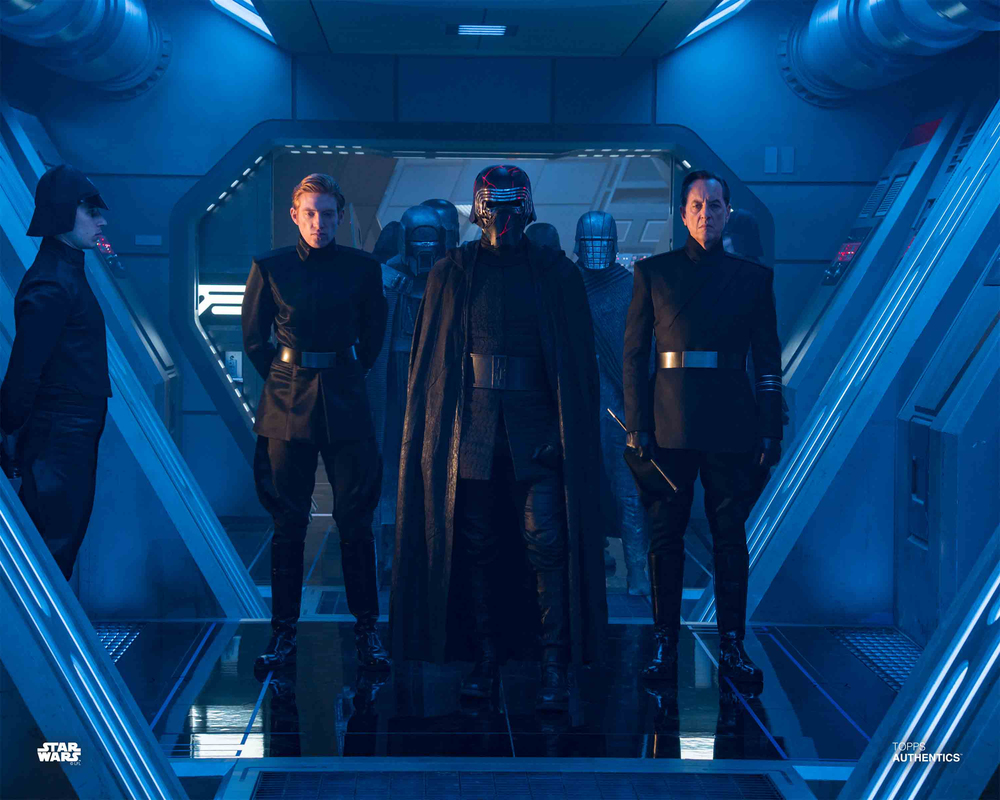 This is another great look inside Supreme Leader Kylo Ren’s Star Destroyer, and he’s flanked by General Hux and Allegiant General Pryde, a high-ranking general in the First Order, who also previously served in the Galactic Empire.

It’s unfortunate that the movie didn’t really delve more into this trio’s dynamic. 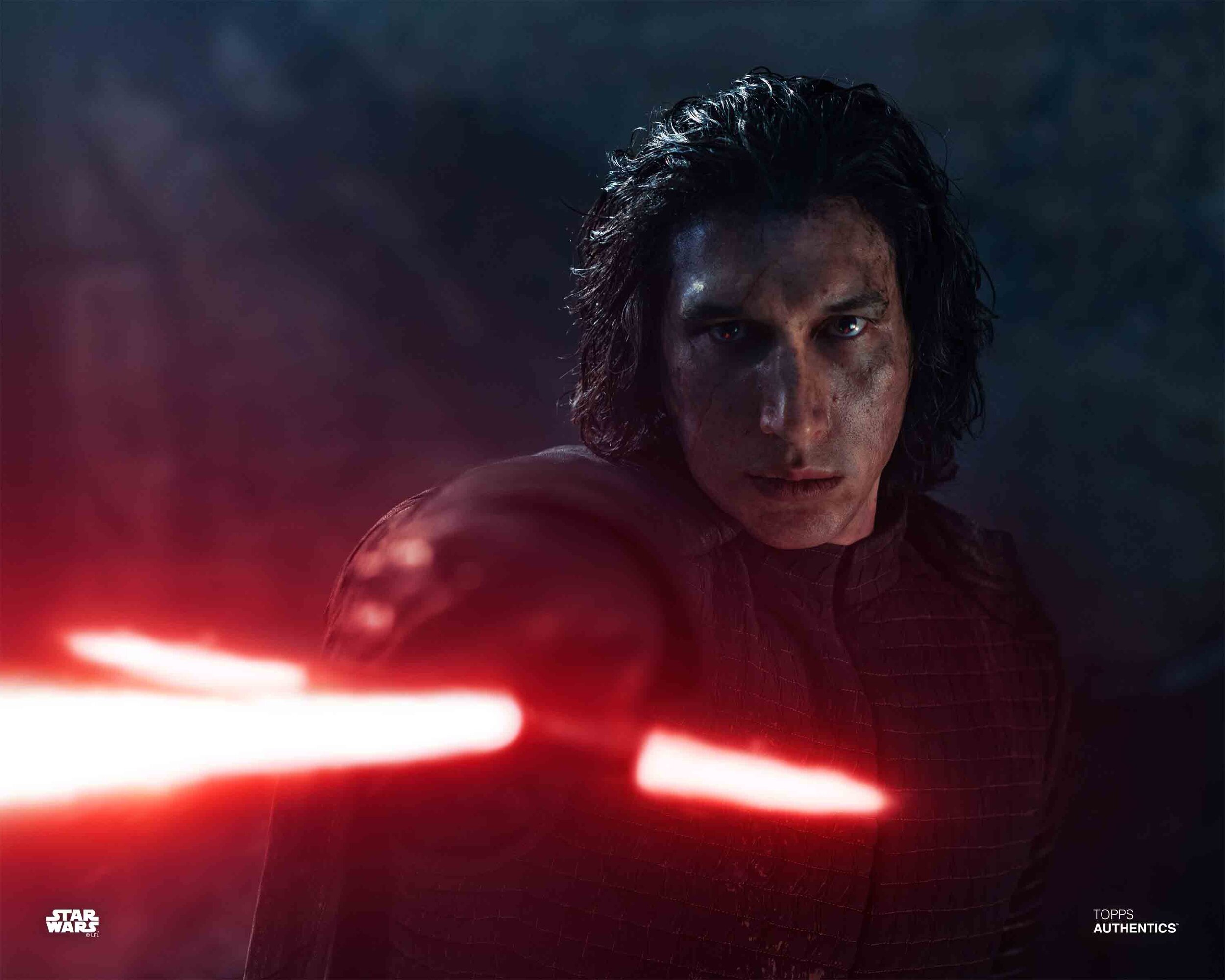 What an amazing shot of Kylo Ren! This is, of course, taken from the moment he comes face to face with Emperor Palpatine and rather than being happy to have found the one-time leader of the Empire, he immediately started plotting to destroy him.

Of course, it does make sense that he would want to betray the Sith Master, but this is another relationship which The Rise of Skywalker would have benefited from delving into. This is an awesome action shot of the movie’s heroes as they race through the First Order Star Destroyer that Chewbacca was being kept prisoner on by his oldest friend’s villainous son.

Yes, for some reason, J.J. Abrams failed to give us a scene between Chewie and Kylo Ren! 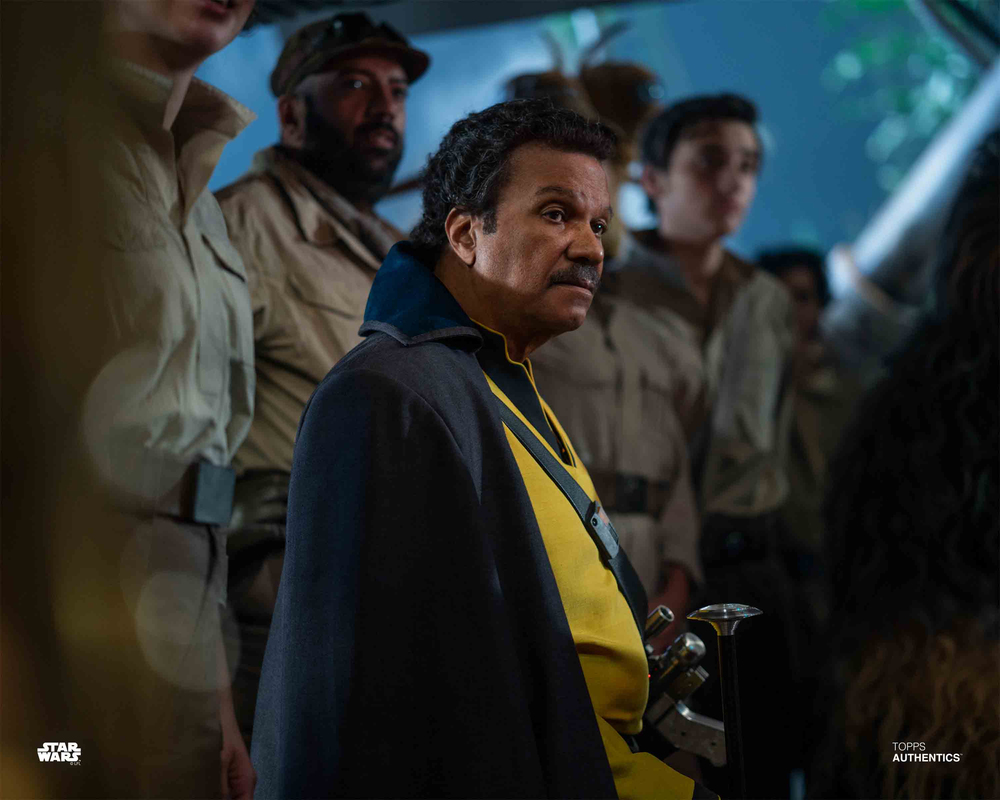 Billy Dee Williams’ return as Lando Calrissian was long overdue by the time The Rise of Skywalker rolled around, but the Rebel hero wasn’t really given much to do.

In Colin Trevorrow’s version of Episode IX, he would have initially refused to help the Resistance before joining the final battle. It’s still unknown why J.J. Abrams scrapped the subplot about Jannah being his daughter. 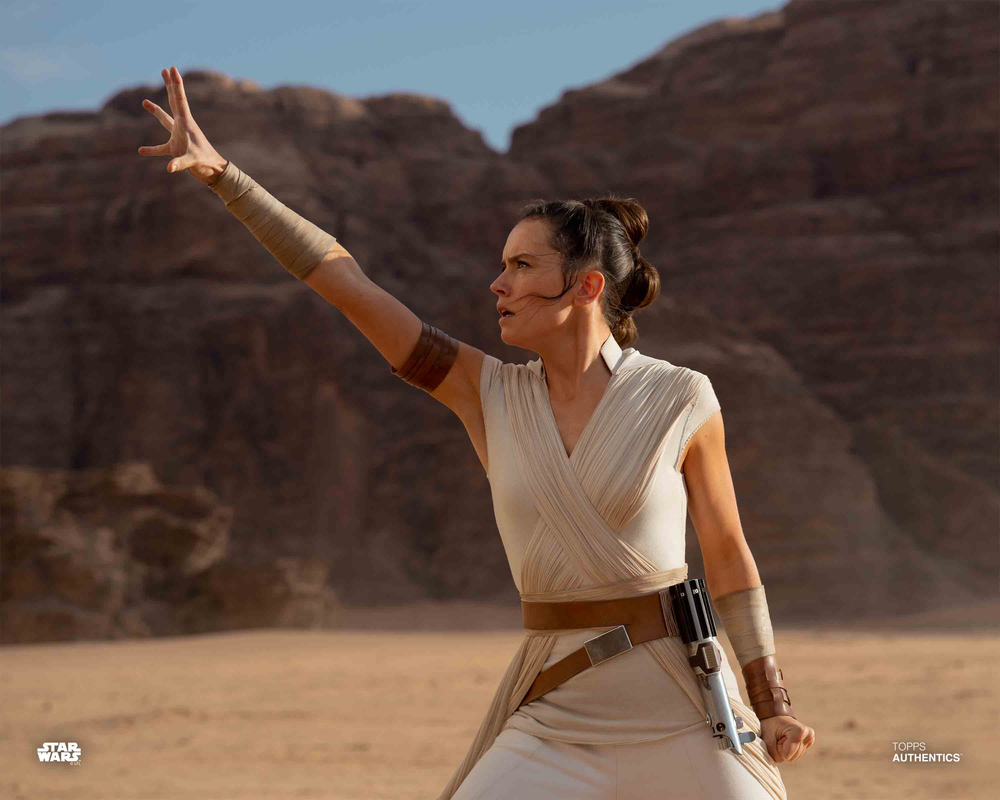 This was the fateful moment in the movie when Rey unleashed Force Lightning and seemingly killed Chewbacca.

However, it didn’t take long until we learned that was just a fakeout, and while it’s possible the Wookie was supposed to have died in an earlier version of the film, we’ve heard nothing which points to that being the case. 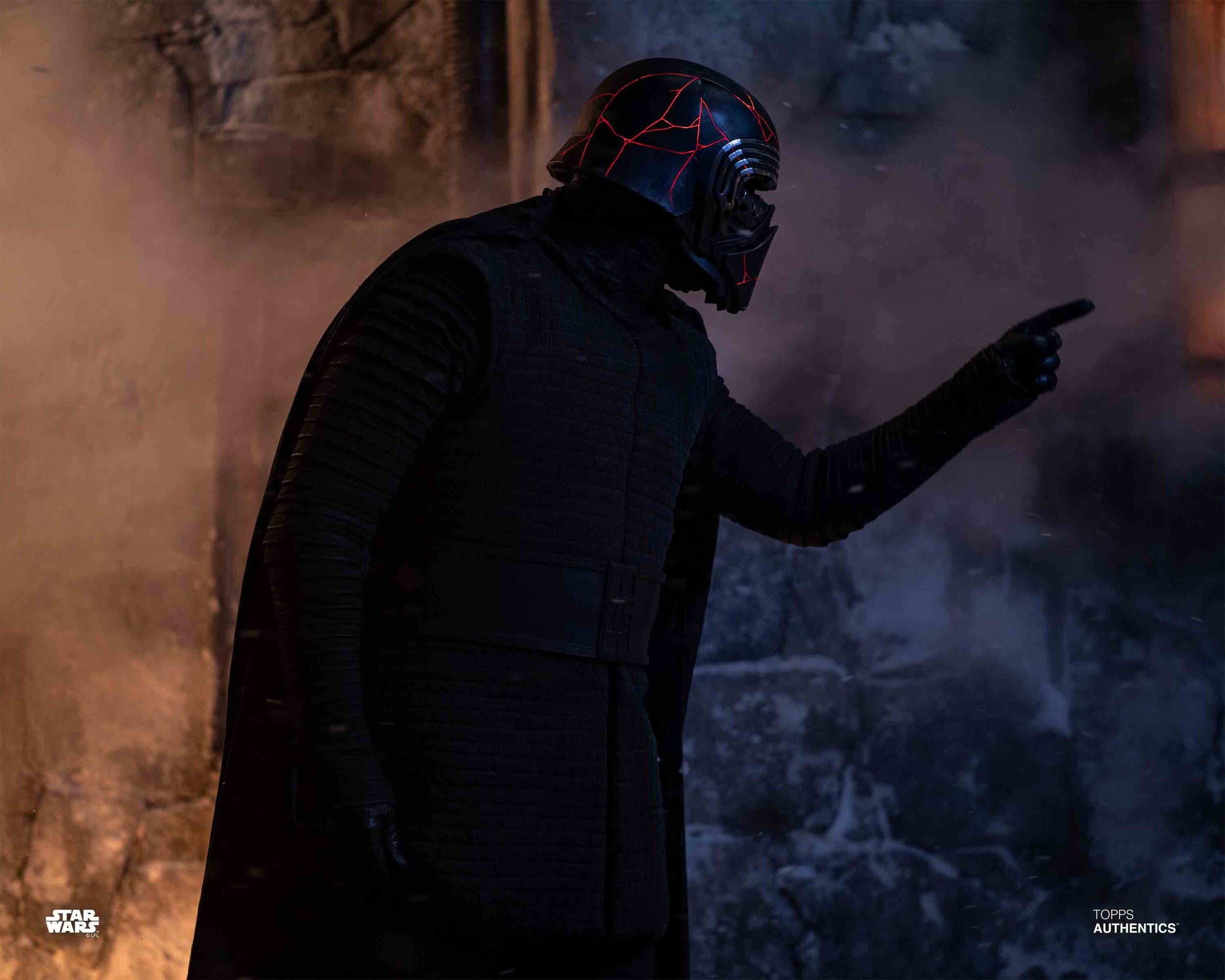 Adam Driver really doesn’t get enough credit for his work as Kylo Ren in the Star Wars sequels, and say what you will about this finale, but his performance was great from start to finish.

Visually, that helmet is quite cool, but it still would have been fun to see a totally new version! 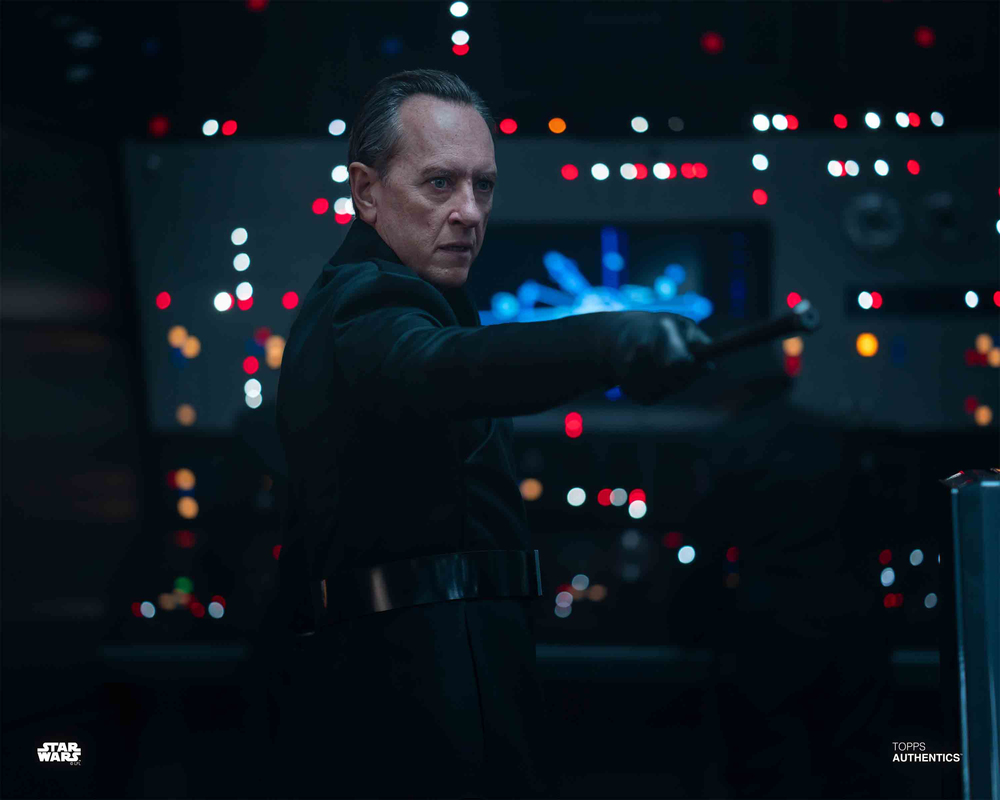 This appears to be a deleted scene from The Rise of Skywalker, and your guess is as good as ours when it comes to who he’s confronting in this shot.

Perhaps an earlier version of the movie was going to elaborate on why he seemed to almost take joy out of killing General Hux when he was revealed to be the “Resistance Spy.” 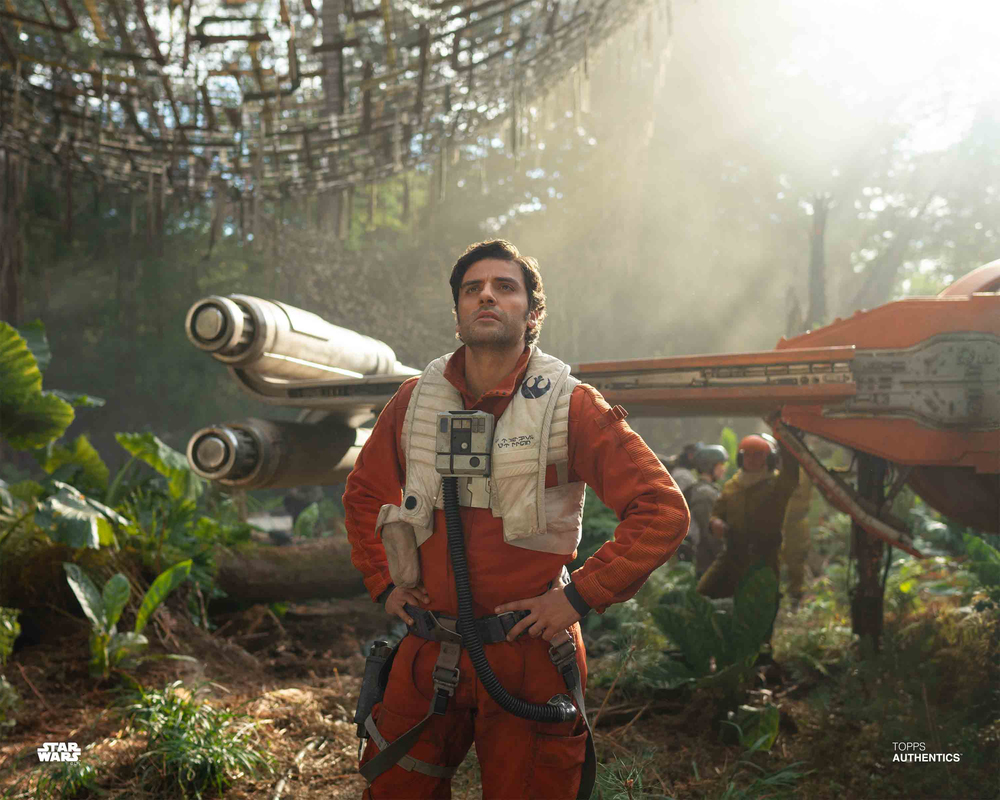 As hero shots go, this is an awesome photo of Poe Dameron, and that’s his X-Wing in the background.

If you’ve been to Galaxy’s Edge and tried out the “Rise of the Resistance” ride, then you’ll have been given the chance to get up close and personal with the hero’s ship. 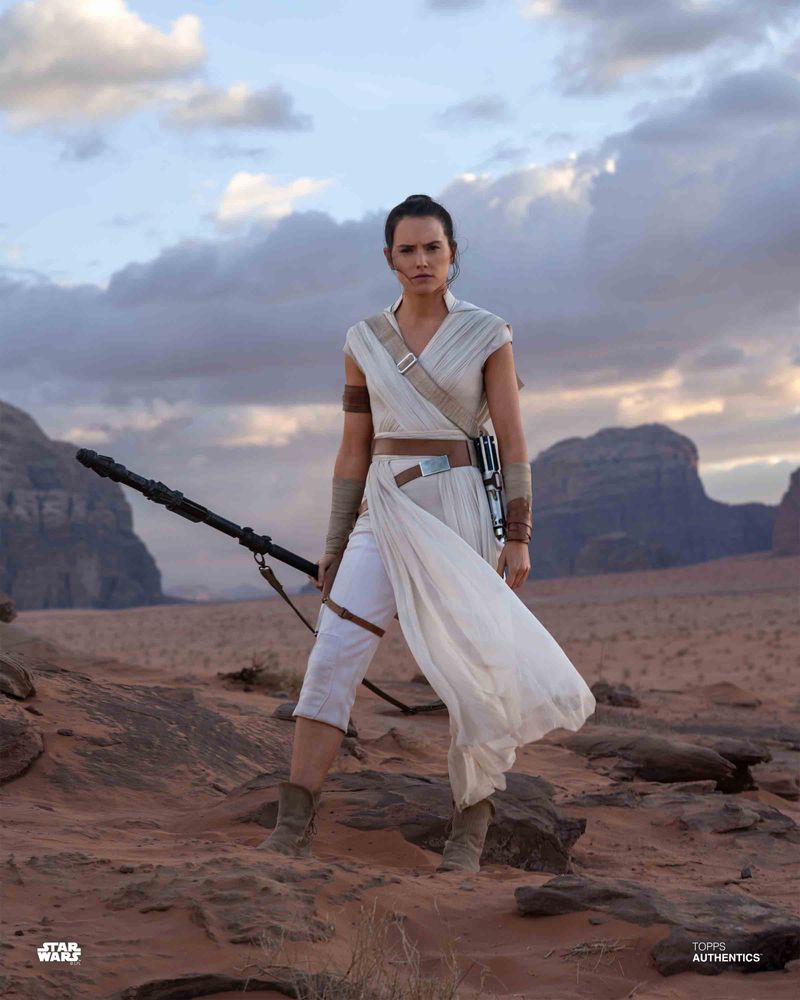 Rey returned in The Rise of Skywalker without a brand new look (something which proved to be a disappointment to many fans).

Instead, the Jedi was basically shown wearing a cleaner version of her costume from The Force Awakens, but the white definitely leaned into the idea of her being on the Light side of the Force. 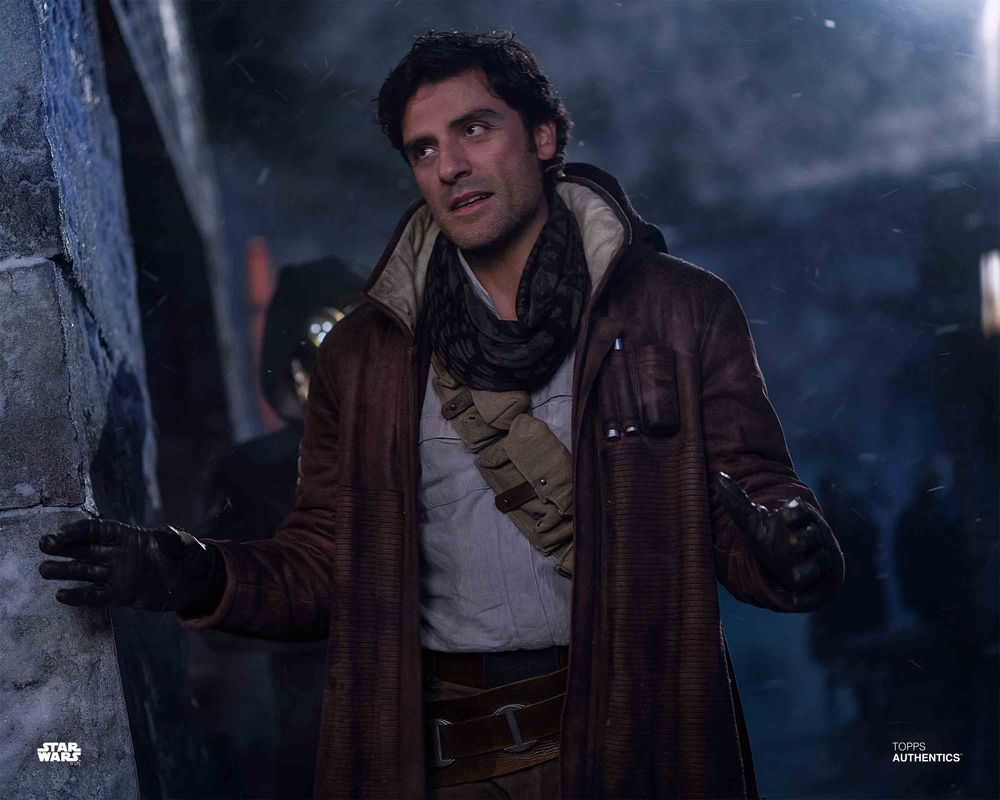 Poe Dameron got to rock quite a few different outfits in The Rise of Skywalker, and this was one of the most noteworthy.

The trilogy never really leaned into the fact that Poe could be the “new” Han Solo, and it’s a shame because he definitely could have brought that roguish charm to the sequels. 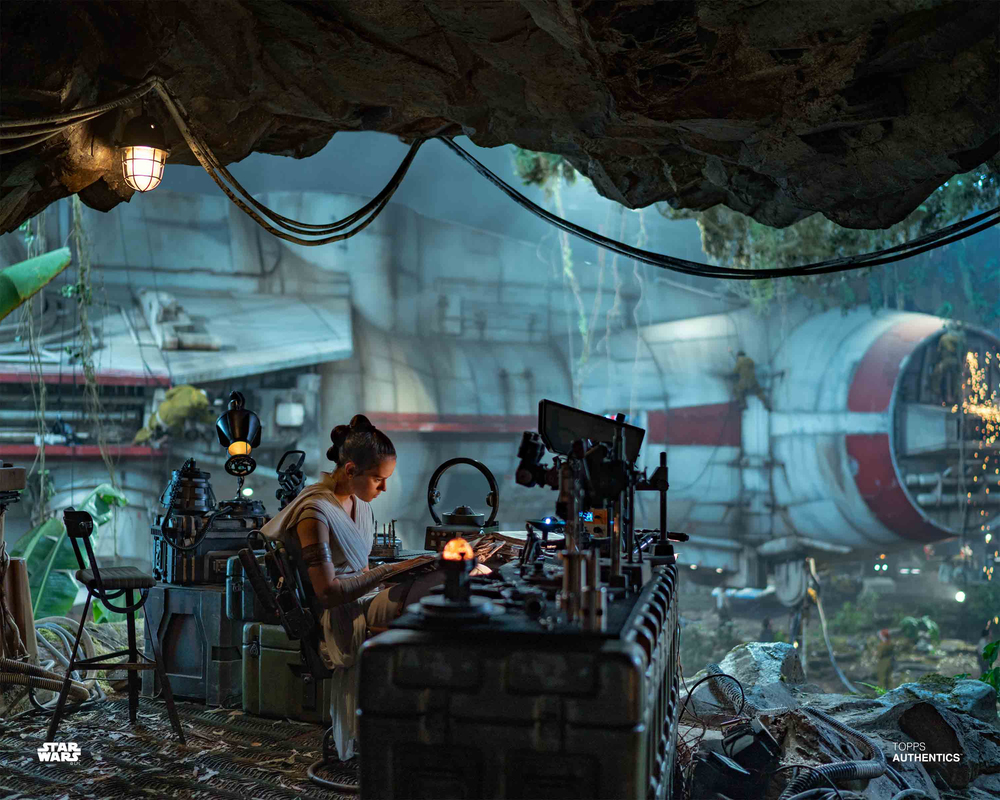 Rey studies the Jedi Texts here, while a member of the Resistance works on a familiar ship in the background.

The hero’s training is only briefly touched on in The Rise of Skywalker, but you have to believe that there are more stories to be told between the events of The Last Jedi and this film. Look at this still for more than 90 seconds, and that’s still more screentime than poor Rose Tico received in the Skywalker Saga finale! The question is, why was she put on the backburner?

Common sense says that it was probably Lucasfilm’s way of appeasing the so-called “fans” who decided to target the character as a means of venting their frustrations over The Last Jedi.