During a recent interview with Variety, Anne Hathaway reflected in her time working with Christopher Nolan on both The Dark Knight Rises and Interstellar. It’s no secret that the filmmaker has a unique approach to his work, but that’s paid off in a big way, especially as he’s now one of only a handful of directors whose name can be used to sell a blockbuster.

Tenet is dictating when theaters re-open, and the hope is that it will be the movie that brings people back to multiplexes (hence why Disney decided to move Mulan after Nolan’s film opens).

“I mean, he has these incredible movies in terms of scope and ambition and technical prowess and emotion. It always arrives at the end under schedule and under budget. I think he’s onto something with the chair thing.” It may sound harsh, but it does make sense when you stop and think about it, and is something that’s paid off for Nolan over the years.

What do you guys make of Nolan’s lack of chairs on the set of his movies?

Click on the “Next” button below to check out the
Batman vs. Joker stories we want to see in The Batman sequel! 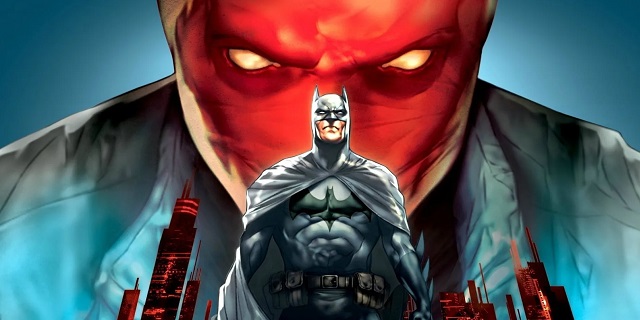 “Under the Hood” told the story of Jason Todd’s return to Gotham City as a murderous vigilante. He had been believed dead after being murdered by The Joker, but took on the identity originally held by the Clown Prince of Crime to get revenge on both him and his former mentor.

This story revolved mostly around the relationship between Batman and his former Robin, with The Joker more on the periphery, but that wouldn’t necessarily be a bad thing. Fans have been crying out for this for years, and Warner Bros. and Matt Reeves would be smart to make it happen.

Perhaps it could be revealed that Robin helped Batman during the first year of his career (seeing as The Batman takes place during the second) before being killed by The Joker? Failing that, this is a storyline which could be adapted in a third or fourth movie starring the Caped Crusader. 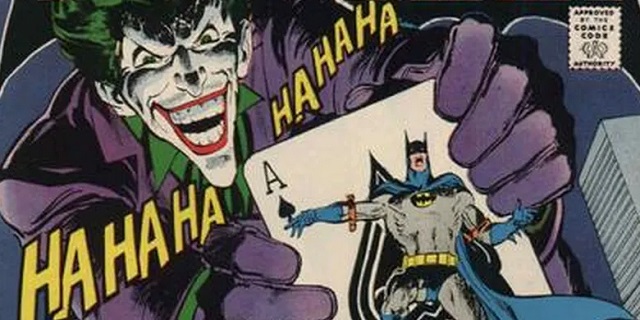 “Five Way Revenge” came at a time when Batman comics desperately needed to move away from the campy tone established by the 1960s TV series. The story revolved around The Joker’s attempt to take out five henchman who had displeased him in various ways, leaving the Dark Knight with no other choice than to protect those he would normally beat and put behind bars.

As well as showing The Joker’s disregard for those in his employ, this story increased the complexity of Batman and The Joker’s relationship. After ambushing a tired and weakened Batman, the villain decided that his victory was a case of luck rather than being the better man, so he chose to leave his foe alive. Elements of all of this in a movie would work nicely down the line.

It’s an admittedly obscure tale, but one Reeves could flesh out in a multitude of satisfying ways. 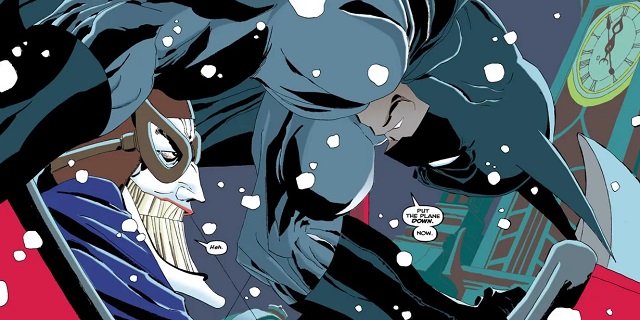 A truly epic tale, The Long Halloween featured The Joker in a fairly minor, but still pivotal role. The story revolved around a year-long mystery as Batman took on almost all of his iconic foes while simultaneously trying to take down a mysterious murderer known only as “The Holiday Killer.”

Furious at being outshone by him, the Clown Prince of Crime took to the skies on New Year’s Eve in a bid to spread a poison gas across Gotham. An epic battle ensued which saw Batman battle his foe for control of the plane, at one point getting his cape caught in the propeller.

He eventually took The Joker down, and with rumblings that this storyline could be adapted in Matt Reeves’ The Batman, we’d definitely like to see this subplot adapted in a future movie.

7. Death Of The Family 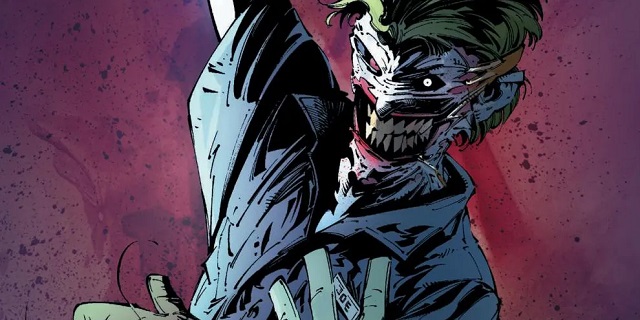 When The Joker escapes captivity, he leaves something behind; his face! Months later, the villain resurfaces and steals it back, spending this arc with the decomposing skin strapped to his face with a belt and fishing hooks. Things get even more twisted than that though when he starts targeting each of Batman’s closest allies, and this is begging for a big screen adaptation.

It’s revealed that Bruce has always suspected that The Joker knows his secret identity after he found a playing card left for him in the Batcave, while he also admits to visiting The Joker in Arkham Asylum (out of costume) to see if the villain would acknowledge him. Batman even claims to know his foe’s real name, leading to him jumping from a cliff before he can say it.

This storyline really deepened the Dark Knight’s relationship with the Clown Prince of Crime, and could be the best possible way to reintroduce the character in an original and memorable way.

6. “The Man Who Killed Batman” 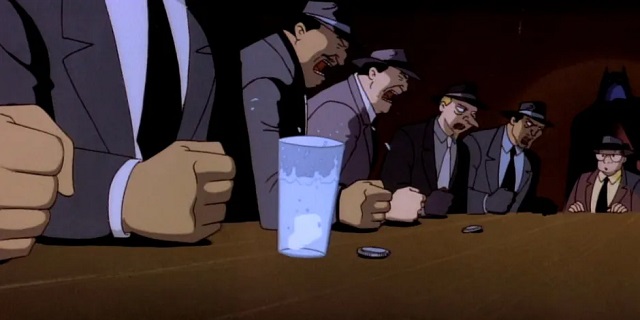 This is a story which hails from the massively popular Batman: The Animated Series rather than a comic book, but seeing elements of this classic tale in a movie would be no bad thing.

The unique episode focused on a hapless gangster known as Sid the Squid, a criminal who it appears succeeded in killing Batman. This obviously brings him in contact with many grateful bad guys, but The Joker is less pleased about this nobody doing what he never could.

Incensed by both that and the loss of his enemy, he looks to take out Sid, but is stopped at the last minute by a very much alive Batman. There’s obviously not enough here for an entire movie, but there’s no denying that elements of this could work brilliantly as a subplot or side story. 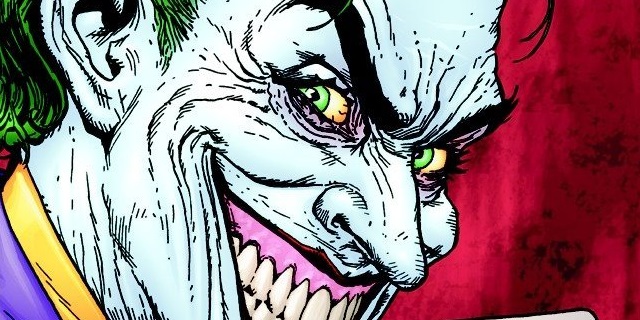 Ed Brubaker and Doug Mahnke’s “The Man Who Laughs” serves as a modern retelling of the Clown Prince of Crime’s origin story, and serves as a loose sequel to “Batman: Year One.”

That alone could make it an ideal follow-up to The Batman, and while we got an origin for this villain in Joker, a comic accurate take which incorporates the Red Hood and ACE Chemicals would definitely be appreciated by fans. Batman could even spend most of the movie battling Red Hood before this transformation takes place and he’s introduced to his most twisted foe.

“The Man Who Laughs” offered an in-depth, layered take on The Joker, and that’s definitely something which could help differentiate this version from the many great ones we’ve seen before. 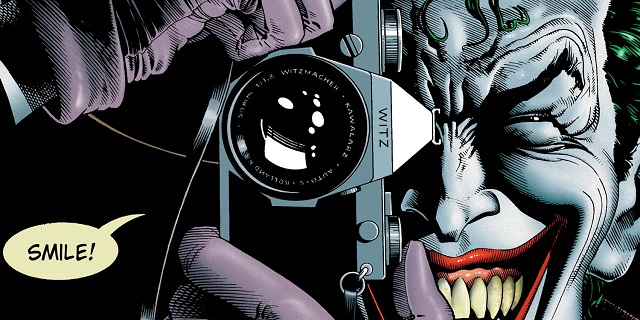 Arguably the most well-known and iconic Batman/Joker story of all-time, The Killing Joke is just begging to be adapted. While The Joker’s treatment of Barbara Gordon/Batgirl has always been mired in controversy (he shoots her, then proceeds to take nude photos of her to taunt her father with), that would need to be included here in some form, and hopefully in a better way.

Regardless, after attempting to mentally break Jim Gordon, an epic showdown with Batman ensues, but ends in a surprising way. The two share a laugh as they wait for the police to arrive, but there are those who speculate that the sudden end of The Joker’s laughter is because Batman kills him.

There’s nothing to say that this would have to be a 100% faithful adaptation, of course, but Reeves would definitely be wise to lift elements from this in order to make a clash between the two truly memorable. 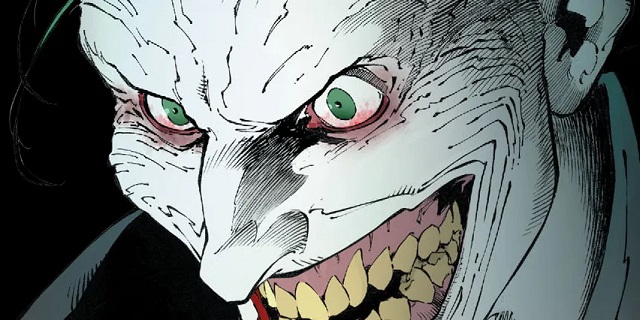 A follow-up of sorts to “Death of the Family,” this story saw The Joker return to Gotham City more powerful than ever, poisoning the entire city with a formula which drives them insane.

The only way to cure them is for Batman to extract a mysterious chemical from The Joker’s spine, but there are hints along the way that the villain is actually hundreds of years old and possibly some sort of immortal who has been causing chaos in the city for centuries. Crazy, right?

That is later debunked when it’s revealed that he found a chemical which healed his face and gave him enhanced strength, and after a battle which sees both Batman and The Joker left bloodied and maimed, they’re buried underground. Needless to say, this has all the makings of an epic movie, and could be a great way to reinvent the Clown Prince of Crime for a new story. 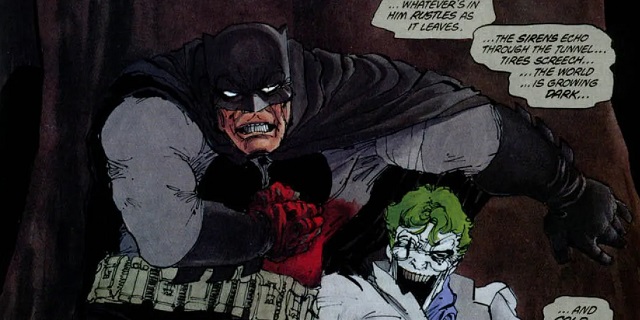 Batman v Superman: Dawn of Justice obviously paid homage to The Dark Knight Returns in a lot of ways, but The Joker was obviously nowhere to be seen, and the villain’s role in that famed Frank Miller story could very easily be used to influence a possible sequel to The Batman.

Faking a recovery after years of being institutionalised, The Joker ends up poisoning an entire TV studio during an interview, and soon finds himself on a collision course with Batman as a result. However, the aged Batman in this story is in no mood to play games with his old foe, blinding him with a Batarang to the eye and breaking his neck after a vicious beating in a Tunnel of Love.

Unable to kill his paralysed enemy, The Joker laughs as he finishes the job, framing Batman for his murder in the process. Is this too dark for Reeves? Perhaps, but the villain could always fake his death! 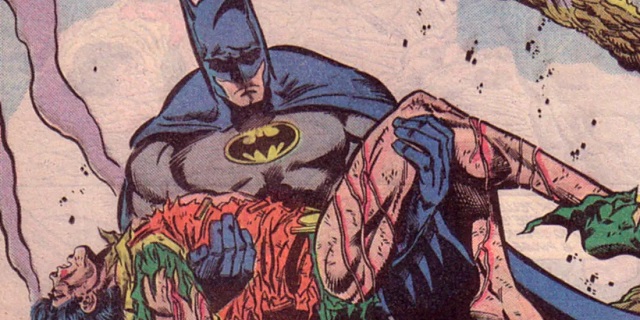 This iconic tale saw readers vote to kill off Robin, and the youngster died after a brutal beating from The Joker with a crowbar. The image of Batman cradling his sidekick is iconic, and a moment which both changed the Caped Crusader forever and made people question why he would take a child into battle against foes as dangerous as the Clown Prince of Crime.

As we’ve established, if “Under the Hood” is adapted, this needs to come first, and it would be no bad thing for The Batman sequel to adapt this story and deal with Jason Todd’s return down the line.

The DC Extended Universe hinted at Robin’s fate in Batman v Superman: Dawn of Justice, and Zack Snyder would later reveal that the defaced costume belonged to Dick Grayson. We’d rather this franchise not head down a similar route, but the rise, fall, and resurrection of Robin is a story worth telling.