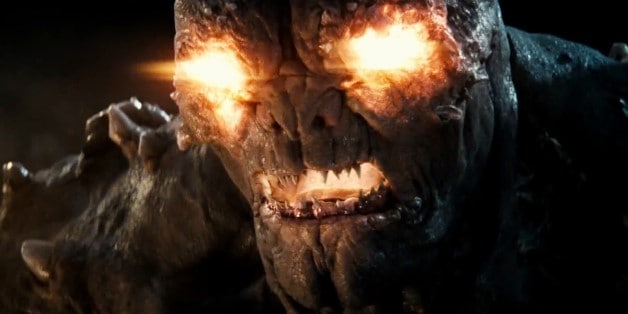 Another day, another leaked image of unused Batman V. Superman: Dawn of Justice concept art. This time we are feasting our eyes on what Doomsday could have, should have looked like.

This comes to us from a Reddit post from user AldebaranTauro, who credits the Doomsday art to Jerad S.Marantz. The image shows us a look into the mind of director Zack Snyder as he worked behind the scenes on Batman and Superman team-up movie. In the drawing, Doomsday looks a bit more… Like Michael Shannon’s General Zod? Maybe that part is just me, but it would certainly make sense seeing as how the Doomsday abomination was convolutedly composed out of Zod’s corpse.

Regardless, this looks scarier than the thing that ultimately killed Superman in the movie.


Check out the image for yourself below:

OTHER: Doomsday (BvS) concept art by Jerad S.Marantz from DC_Cinematic

What do you think of the image? Does it look more like Michael Shannon? Less like a Teenage Mutant Ninja Turtle? More likely to kill Superman? Possible even Batman? Let us know what you are thinking in the comments below!


The Batman is one of the many projects currently being developed by Warner Bros. and DC Films, including The Flash standalone film, Green Lantern Corps, Black Adam, Cyborg, Supergirl, New Gods, and Nightwing.

Following Aquaman, which is now playing, the DCEU continues in April with Shazam! on April 5, 2019, which will be followed by Birds of Prey (And The Fantabulous Emancipation of One Harley Quinn) on February 7, 2020, and Wonder Woman 1984 on June 5, 2020. A standalone Joker film set outside of the DC Films universe starring Joaquin Phoenix as the Clown Prince of Crime is also set to hit theaters October 4, 2019.

Directed by James Wan, Aquaman stars Jason Momoa as Arthur Curry, Amber Heard as Mera, Willem Dafoe as Vulko, Patrick Wilson as Orm / Ocean Master, Dolph Lundgren as Nereus, Yahya Abdul-Mateen II as Black Manta, Nicole Kidman as Atlanna, Ludi Lin as Captain Murk, and Temuera Morrison as Tom Curry. From Warner Bros. Pictures and director, James Wan comes an action-packed adventure that spans the vast, visually breathtaking underwater world of the seven seas, “Aquaman,” starring Jason Momoa in the title role. The film reveals the origin story of half-human, half-Atlantean Arthur Curry and takes him on the journey of his lifetime—one that will not only force him to face who he really is, but to discover if he is worthy of who he was born to be… a king. Aquaman is now playing. Stay tuned to Heroic Hollywood for the latest news on the future of the current DC cinematic universe as we learn it.