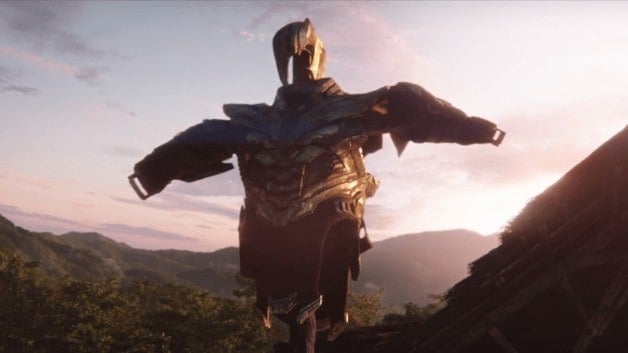 Before his return in Avengers: Endgame, fans can see Thanos (Josh Brolin) don his iconic armor from the Annihilation comic in this new image.

In 2006, Marvel released a new event series titled Annihilation, which focused on many of the key cosmic players of the Marvel universe, including Thanos. The Mad Titan was most recently seen on the big screen in 2018’s Avengers: Infinity War played by Josh Brolin but in Annihilation, fans were treated to a very different kind of Thanos.


Last year, around the same time Avengers: Infinity War hit the big screen, Sony’s God of War released exclusively to the PS4 to massive praise from fans and critics alike. The latest entry of the long-running God of War franchise featured beautiful art direction from Raf Grassetti, who took to Instagram to apply that same talent to a new image of Thanos wearing something that will hopefully be featured in Avengers: Endgame in just a few short months. Check out the incredible artwork in the post below.

Although the next Avengers film has the subtitle Endgame, some fans are still convinced that the film will loosely adapt at least part of the Annihilation story. The miniseries featured a powerful enemy named Annihilus leading a fleet of spaceships known as “The Annihilation Wave” across the galaxy. Given the secrecy surrounding Avengers: Endgame, it’s possible that Marvel is hiding this shocking twist from fans but nothing has been officially confirmed regarding the presence of Annihilus or The Annihilation Wave in Avengers: Endgame at this time.


We’ll be sure to keep you updated on all news regarding Avengers: Endgame as soon as more information becomes available. What’s your opinion on the artwork from the God of War art director? How do you think Annihilation could work into the story of Endgame? Let us know your thoughts in the comments below!

What We Learned About ‘Spider-Man: Far From Home’ At CCXP

Sony Pictures and Marvel Studios shared some brand new information on their highly-anticipated sequel, Spider-Man: Far From Home. The film, which is the follow-up to 2017’s Spider-Man: Homecoming marks the return of Tom Holland as Peter Parker following the release of Avengers: Endgame and will also feature the cinematic debut of Mysterio, who is portrayed by Academy Award-nominee Jake Gyllenhaal.

Here are some of the things we have learned about Spider-Man: Far From Home following its presentation at the 2018 Comic Con Experience (CCXP) in Brazil. Click “Next” to find out.