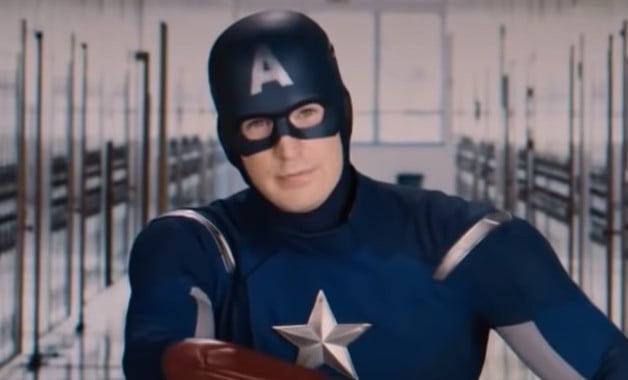 A poll recently appeared on Reddit asking fans if Captain America should say his most famous line in Avengers: Endgame or not.

The question on the poll is rather simple: Will/should Captain America say “Avengers Assemble!” in Endgame? We all know its one of the most emblematic lines said by Steve Rogers in the comics when any climactic moment for the Earth’s Mightiest Heroes is about to unfold. But the Marvel Cinematic Universe also referenced it at the end of Avengers: Age of Ultron.

While Captain America and Black Widow are gathering War Machine, Scarlet Witch, Falcon, and Vision as the new recruits for the Avengers, his final line should have been the comic famous Avengers Assemble! but director Joss Whedon had another thing in mind. He decided to end the film with Steve Rogers only saying Avengers without Assemble.


It was quite a neat treat for us fans watching the film because we knew how that sentence ended; it’s very likely that some of us actually said it just as a reflex when the film concluded. This scene may have stuck in the mind of many fans and, after being disassembled in Infinity War, it seems that people are advocating for it to be said once again by Captain America sometime during Endgame.

Needless to say, after being scattered in Captain America: Civil War, it’s a universal feeling that we need to hear the Avengers Assemble line to bring back the superheroes once again. Also, the Russo brothers stated in the past that they like to close character arcs successfully and saying this line would truly complete the assembly cycle once and for all.


The poll stands on 81% votes in favor of the line being said and 19% votes against, at the moment. You can vote and check the poll out here.

Will Captain America say his famous line or not? What do you think? Sound off in the comment section down below!

Here is a plot synopsis for Avengers: Endgame:

Here’s What We Learned From The ‘Avengers: Endgame’ Trailer

After Avengers: Infinity War concluded with Thanos using the power of the Infinity Stones to erase half of the population in the universe from existence, fans spent the rest of the year speculating on how our heroes could reverse the Mad Titan’s decimation and what would have to be sacrificed as a result. Now, the first official trailer for Avengers: Endgame offers fans their first look at how the surviving heroes have coped with the loss of their loved ones and may provide insight into how they plan to defeat Thanos.

You can click “Next” to continue the gallery and find out what we learned from the new trailer!