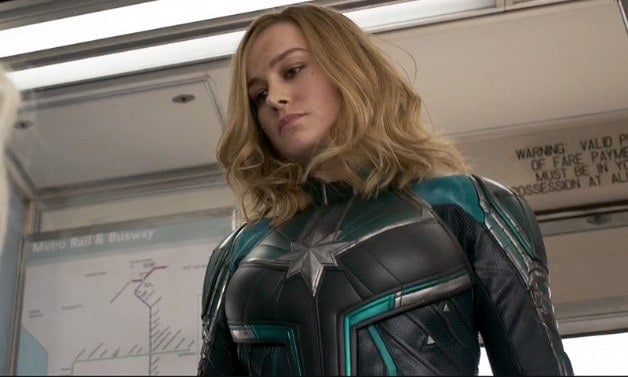 The clip in question involves the train fight sequence that we first caught a glimpse of in the initial Captain Marvel trailer. This time around, however, we got to see a bit more of the scene play out as Captain Marvel herself dukes it out with a powerful, fast-moving adversary. While we do not get much of a look at who it is Captain Marvel is fighting, we are allowed a sense of how the action in this film will work as Carol Danvers is nearly knocked from the moving train.


However, Cap is not the only hero featured in the clip. Chasing after the train in hot pursuit is Nick Fury and Agent Coulson together in Fury’s car. The dynamic duo does not get much to do in the clip other than scheme to cut the train off at the next station. Meanwhile, Captain Marvel pulls herself back up onto the train just in time to blast a hole straight into an incoming bridge before the clip comes to an abrupt end.

Check the clip out for yourself below:

By piecing this footage together with the footage we have already seen of Captain Marvel on the train, it is probably safe to assume that she is fighting a Skrull post its old woman disguise from the previous trailers.

What are your thoughts and feelings on this extended Captain Marvel clip? Does it get your blood pumping any faster to see Captain Marvel? Let us know in the comments below!

Following the release of the new trailer, Hasbro has revealed the first look at Captain Marvel’s tie-in material that will start hitting shelves in January. Hasbro’s Marvel Legends action figure priced at $19.99 will feature swappable parts, which will include Captain Marvel’s Mohawk helmet. Hasbro will also be releasing a “Photo Power FX Glove” and an 11.5-inch doll. LEGO will be releasing a new set titled, “The Skrull Attack,” which includes the Quinjet along with mini figurines of Captain Marvel, Nick Fury, Talos, and Goose; the set will cost $29.99.

You can check out the merchandise in the gallery below:

Based on the Marvel comic character first appearing in 1968, the story follows Carol Danvers as she becomes one of the universe’s most powerful heroes when Earth is caught in the middle of a galactic war between two alien races.  Set in the 1990s, “Captain Marvel” is an all-new adventure from a previously unseen period in the history of the Marvel Cinematic Universe.